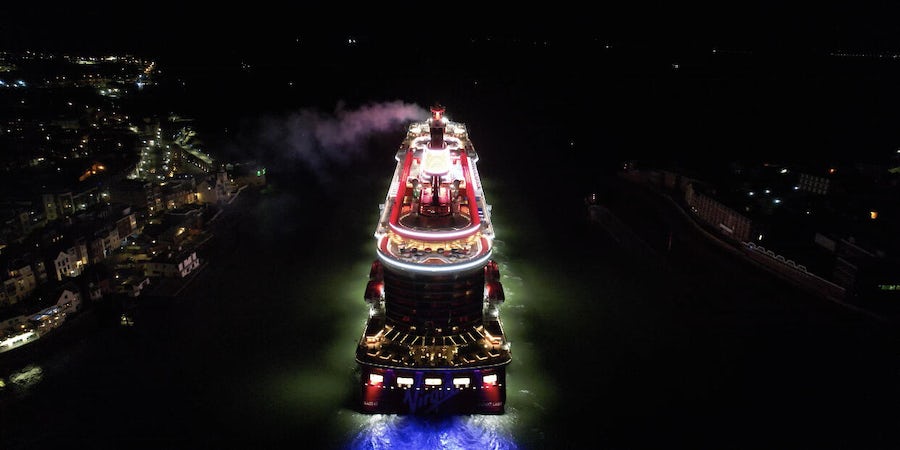 (11:15 a.m. GMT) -- Virgin Voyages' second ship Valiant Lady made its way up the Thames today to Tilbury ahead of its overnight showcase for invited press, agents and VIP "sailors".

The adults-only ship is then touring the UK, including an overnight in Liverpool on Monday, before heading to Portsmouth for its "MerMaiden" cruise next Friday to Zeebrugge.

Speaking at the launch of Valiant Lady, Tom McAlpin, CEO of Virgin Voyages said: "It was incredible to launch Virgin Voyages last year, so welcoming our second ship, Valiant Lady, here in the UK less than a year later is a very special moment for the entire Virgin Voyages family. After a tough two years, people are excited to explore the world again and it means a lot to us that we can help facilitate that."

Valiant Lady arrived in Portsmouth earlier this month and has been operating a series of short cruises for Virgin Voyages family and friends to France and back.

Valiant Lady is pretty well a carbon copy of Scarlet Lady, which operated a series of cruises to nowhere from Portsmouth all last summer, before heading to the US., where it has been based ever since.

Valiant Lady features, among other firsts, a tattoo parlour, a theater which turns into a dance floor, a boxing ring, a giant hot tub on the pool deck, drag queen brunches and sex talks and Rock Star Suites featuring a guitar room.

The ship is already getting rave reviews from Cruise Critic members, despite not operating any revenue sailings.

The ship will be based in Portsmouth until May 15, offering three-night "long weekenders" to Bruges as well as 11- and 12-night cruises to Spain, Portugal, and the Canary Islands.

Valiant Lady will then head to Barcelona where it will begin a series of Western Mediterranean cruises.