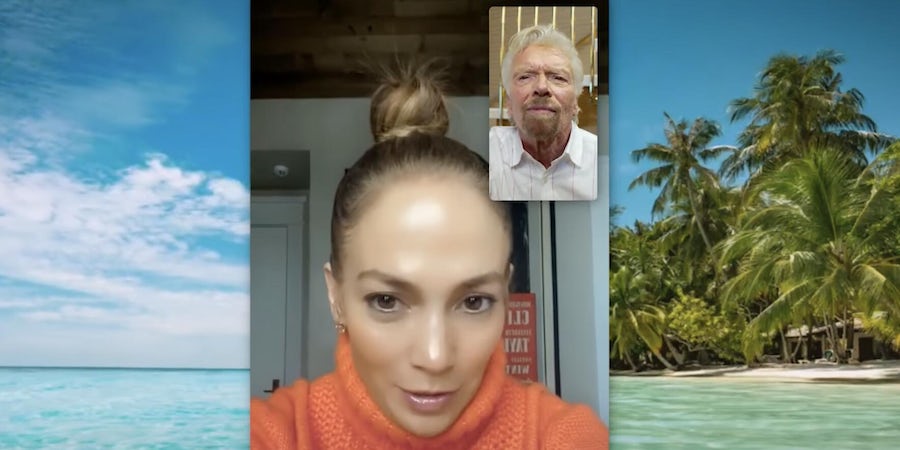 Virgin is calling the deal a "change-making partnership with undoubtedly one of the most powerful artists in the world." The idea is godmother-ish, but with a modern take.

Virgin Voyage officials felt it was important "to iterate on past traditions where women were merely figureheads, and instead, improve and diversify the industry we love so dearly," the cruise line says in a blog post. Lopez will "help shape the future of travel with us."

Adds Tom McAlpin, CEO of Virgin Voyages, in a prepared statement: "As an investor and adviser, she turns the godmother tradition on its head and makes it powerful and limitless."

Although she's not tecnically a godmother, the Lopez announcement comes just a few days before Virgin's second cruise ship, Valiant Lady, debuts in the U.K. The line's first ship, Scarlet Lady, is based in Miami. The third ship, Resilient Lady, is slated to launch in summer 2022.

The partnership was first unveiled on social media in a playful video of Lopez and Richard Branson, founder of founder of Virgin Group, talking via FaceTime.). Branson jokes that Lopez should have the title "Jenny from the Dock."

The deal with Virgin Voyages furthers her "artistic and social mission to empower, inspire and entertain," Lopez says.

"I admire Sir Richard and all he has built," she says. "I am inspired by Virgin Voyages’ dedication to creating irresistible experiences and focus on well-being, which all fits perfectly with my own lifestyle and brand ethos."

For cruisers, or "sailors" in Virgin-speak, the partnership brings an emphasis on well-being and fitness, design collaborations and entertainment to be introduced throughout 2022, the cruise line said. First up: Virgin Voyages will exclusively introduce JLo Beauty products as part of its onboard offerings.

"We knew immediately that we wanted Jennifer to be a partner and to help Virgin Voyages shape the future of travel on the high seas," says Branson. "She is one of the most talented and hardest working and talented people out there. "I admire her as an artist, as an entrepreneur and as a person."

Lopez is not the first celebrity to join Branson's posse at sea. Virgin Voyages received an influx of cash from Patricof Co., a private investment group made up of more than 40 entrepreneurial athletes for an advisory group that will have input into the line.

Branson has also teamed up with actor Ryan Reynolds to serve spirits from the latter's cocktail company, Aviation American Gin, onboard.