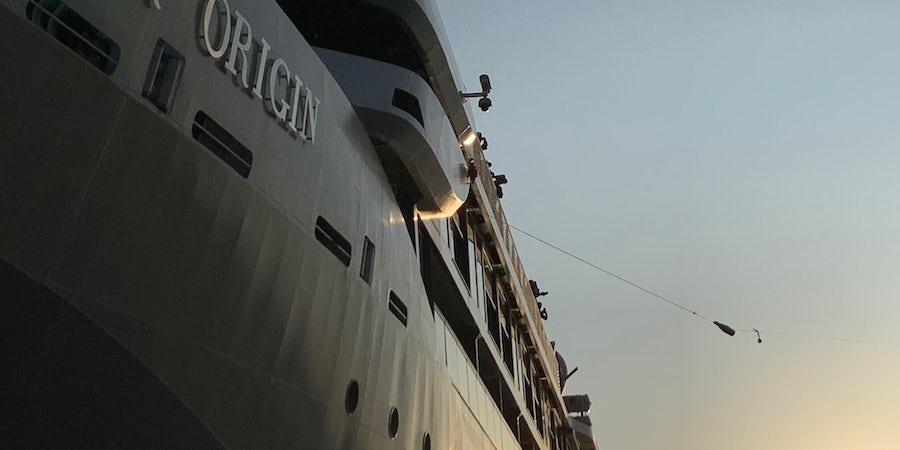 Godmother Johanna Carrion, executive director of Fundacion Scalesia, an educational foundation with a strong focus on conservation in the Galapagos, blessed the ship and "all who sail on her" before cutting a rope strung from Zodiac to ship, sending a bottle of Piper Heidsieck smashing against Origin’s side.

Given the remote location some 600 miles off the coast of Ecuador, and the fact that the cruising region of the Galapagos is a protected national park, the red Champagne bottle was carefully wrapped in a net so that no shards of glass fell into the sea.

Watching the smashing from Zodiacs were guests from the ship, as well as Silversea Cruises executives and Jason Liberty, president and CEO of Royal Caribbean Group – as well as a couple of sea lions, bobbing their heads up from the water to see what was going on. Panama hats and flutes of Champagne were distributed to guests (but not sea lions) for the occasion. Prior to the rope cutting, the bishop of the Galapagos did a blessing with holy water.

Earlier, out on the ship’s expansive top deck, the ceremony began with a processional led by bagpipers, a Royal Caribbean tradition. Barbara Muckermann, chief commercial officer of Silversea Cruises, said finding vaccinated bagpipers in the Galapagos proved impossible. They imported a bagpipe player from Quito, the Ecuadorian city high in the Andes, and he flew in and trained a second player a few hours before the ceremony.

The christening of the ship had long been delayed due to the COVID-19 pandemic. The Netherlands-built ship was delivered to Silversea in March 2020, as cruising came to a halt – and only days after the ultraluxury line flew the last of its passengers home from destinations around the world.

The ship quietly launched in the Galapagos in June 2021. Omicron delayed the naming ceremony even further.

Roberto Martinoli, president and CEO of Silversea Cruises, addressed the delay in his remarks. "The naming of a ship is a very important event and we were not able to do it before because of the obvious fears," he told the gathered 70 or so guests, adding,

"We consider you as extended family and your support in invaluable."

Liberty, overseeing his first christening since being named president and CEO of Royal Caribbean Group, brought along his wife and four kids and sailed on the ship for four days before the ceremony, which was held the last night of a weeklong cruise.

"I have been with the company almost 17 years and I can tell you that this is by far the most beautiful scenery of any naming ceremony we’ve ever had," Liberty said. "It has really been an incredible spending time with many of you. I got to know some of you. I got to swim with some of you."

Silver Origin is Silversea’s first ship specifically built for one destination, and has state-of-the-art diesel engines that reduce fuel consumption by 15 percent from the line’s earlier ship in the region, Silver Galapagos. Other sustainability features include a dynamic positioning system so as not to disturb marine life. More than half the food products served onboard come from the Galapagos.

Liberty said the ship is a representation of where Royal Caribbean Group is going in the future.

"Any position inside our organization, our goal is to wake up every day and deliver the best vacation experiences each and every day and do so in a responsible way," Liberty said. “When you think about responsibility, this ship is really a true testament to our focus on sustainability, our focus on our goals to get to destination net zero, to decarbonize our business. The technology to do that is starting off here on some of our smaller ships like Origin and building up from there."

Liberty also noted that Silver Origin was the "first real investment" that Royal Caribbean made in Silversea Cruises, since acquiring the company in 2018. "To see it in its  full form has been an incredible experience for me," he said.

Godmother Carrion said the cruise line and the educational foundation she runs share similar goals when it comes to the islands.

"Only when you see the Galapagos from a holistic perspective do you get to understand how important it is to support education," Carrion said. "It is essential to provide our young people in the Galapagos islands with the opportunity to get to know the place they live in, understand it and acquire the skills and the desire to protect this place. And Silversea also sees this mission as an important one."