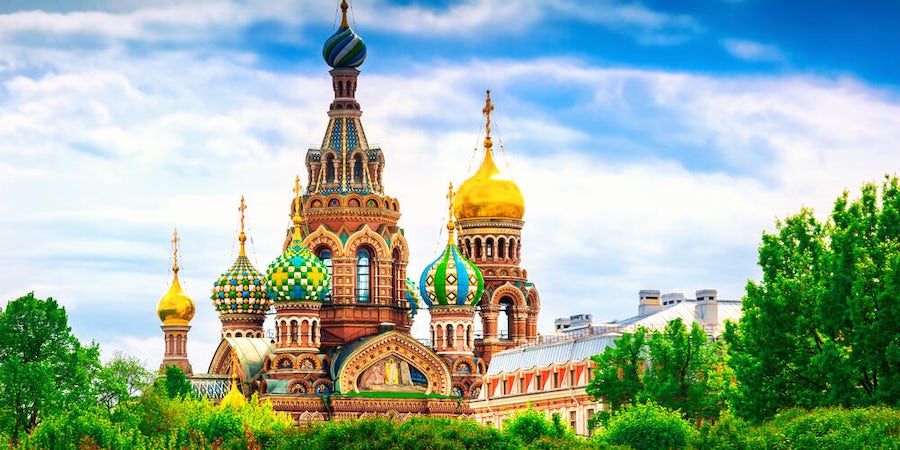 (Updated 11:49 a..m. EDT) -- The Russia-Ukraine war has prompted a growing number of cruise lines to cancel itineraries that include stops in and around Russian ports of call, and to provide aid to Ukrainian refugees in the form of shelter aboard out-of-service cruise ships.

Royal Caribbean Group, Carnival Corporation and Norwegian Cruise Line Holdings -- which together represent the majority of the world's global cruise brands -- have all canceled planned itineraries scheduled to visit Russian ports of call. Other cruise lines have since joined, with some redeploying ships to other areas and others electing to cancel specific ports.

Many cruisers are also understandably worried about crewmembers.

"We are receiving messages from guests asking about our crew who come from Ukraine," wrote Royal Caribbean International CEO Michael Bayley on his Facebook page. "We have over 500 Ukrainian crew onboard our ships today and understandably they are extremely concerned and anxious about their loved ones at home."

The statement confirmed the line had made "all communication channels" open to crew so they can get hold of their families as well as allowing to leave the ships if they need to get home.

"Counseling has been made available to them and ships Captains and management are obviously in daily communication with them to offer assistance as needed."

Canceled and amended itineraries are as follows:

Celebrity Cruises confirmed it would remove St Petersburg from all Summer 2022 itineraries and seek alternative ports in Sweden.

"With the safety of our guests and crew always our top priority, we are removing St. Petersburg, Russia from upcoming itineraries, due to the current situation in Ukraine," a statement read.

"We are notifying our guests and travel partners of this decision and our new plans to visit additional Scandinavian ports in its place. Our thoughts are with all who are impacted by this conflict."

Celebrity Silhouette is due into St. Petersburg on May 20.

Chairman Micky Arison released the following statement via Twitter over the weekend: "We are in the process of securing alternate itineraries for our cruise ships before announcing our future plans. We will be advising our guests and travel partners shortly as plans become finalized."

Princess Cruises has the first big ship in to St Petersburg on April 29, Enchanted Princess. The line has announced that on all 24 calls in St. Petersburg will be replaced with other ports, which vary by itinerary, ranging from an overnight in Stockholm, and calls in Visby, Sweden and Gdansk, Poland.

Holland America Line is modifying itineraries for six cruises that were scheduled to visit Russian ports this year.

The stops will vary, the company said, with five sailings that would have visited St. Petersburg instead calling on Baltic ports such as Riga, Latvia; Klaipeda, Lithuania; and Visby, Sweden. And an overnight stay will be added in Stockholm.

Its cruise that was scheduled to visit Vladivostok, Russia, will instead visit Busan, South Korea.

"We stand for peace, and our thoughts are with those who are in harm's way," the company said in a news release.

MSC Cruises had four ships due to call in at St. Petersburg this year, with the first -- MSC Preziosa (May 7) and MSC Grandiosa -- occuring as early as May 7.

On February 28, the line announced it would no longer visit the city on any of its upcoming itineraries. MSC said it has been in touch with alternative ports such as Stockholm, Helsinki and Tallinn, and will communicate itinerary changes to travel advisors and customers as soon as possible.

Sister-brand Regent Seven Seas Cruises will remove all its planned stops in Russia, which include the Solovetsky Islands, Arkhangelsk, Murmansk and St. Petersburg, as well as Odessa, Ukraine.

Oceania Cruises confirmed it would also remove Russian and Ukrainian ports from its 2022 itineraries.

Viking River Cruises has canceled all 2022 departures from Kyiv and Bucharest, Romania.

"We are currently evaluating itineraries that call in Russia in 2022, which will require modifications," according to a Viking statement. "When necessary changes are made, Viking Customer Relations will notify all impacted guests and their travel advisers."

Atlas Ocean Voyages will skip St. Petersburg for alternative ports in Finland and Estonia this summer.

"With unrest in Eastern Europe, we have adjusted our voyages," President Alberto Aliberti said in a statement. "Guests will enjoy these unique and rarely visited destinations and immersive shore excursions to take in the rich cultures and breathtaking vistas of the Baltic."

Windstar Cruises has cancelled two itinerarises this sumemr with Russia port calls in the Black Sea and will replace St. Petersburg on its five Baltic cruises with a non-Russian port.

"Black Sea Sights & Turkish Delights" calls in at Odessa, Ukraine, and Sochi, Russia in May and September; both these cruises will be replaced with Greece and Turkey port calls.

Azamara has dropped all Ukraine and Russia ports from upcoming Azamara Journey sailings beginning in June 2022.

Azamara has canceled cruises in Turkey, Israel and Egypt, as well as the Mediterranean on its newest ship, Azamara Onward, from November 2022 through March 2023. Instead, the ship will sail itineraries in the Caribbean.

Cruise Critic contacted other cruise lines which have ships scheduled to call in at Russia ports this summer and we received the following statements:

Saga Cruises: The U.K.-based line canceled the Black Sea cruise port of Odessa on a forthcoming cruise onboard Spirit of Adventure: "We are now looking at the impact of the latest developments on our Baltic cruises later this year which were due to call in at St Peterburg," a spokesperson said.

"We will continue to monitor the situation and if necessary make further alterations to our itineraries whilst still ensuring the best experience for our guests."

Hurtigruten Expeditions: The line has one itinerary scheduled on MS Spitsbergen, which is due to call in at Murmansk, Arkhangelsk and the archipelago of Solovki in the White Sea.

"We are following the sad developments closely, and will consider alternatives," a spokesman said.

Cruise lines have begun to offer up their out-of-service cruise ships for refugees seeking shelter from the ongoing conflict.

On March 23, Costa Cruises announced it would utlize the laid-up Costa Magica (soon to transfer to Carnival Cruise Line) to house those fleeing the conflict, while AmaWaterways has made an out-of-service river cruise ship docked in Amsterdam available to refugees arriving into the Netherlands from Ukraine.

On April 1, Holland America Line announced it would use the 1999-built Volendam to house refugees fleeing the conflict. The ship -- which will dock in Rotterdam for three months -- will house up to 1,500 refugees as part of a larger committment from the Dutch govermnet to house 50,000 people fleeing their homeland.

"We are in a unique position to accommodate the immediate need for food and housing, so we felt it was very important to work with the City of Rotterdam and charter this ship," said Gus Antorcha, president of Holland America Line. "Our company was founded in Rotterdam around the mission of helping immigrants find a better life. So today we’re proud to be a small part of a similar mission for Ukrainians who have tragically been displaced."

Volendam was scheduled to return to service in May, however as a result of the humanitarian effort, the ship will now be out of passenger service until July 2022.

Cruise Critic Members Discuss the Conflict on the Message Boards

There are a number of threads on the Cruise Critic Message Boards discussing the ongoing situation, including on Celebrity Cruises, HAL and NCL.

There is also a general discussion about the wellbeing of crewmembers, many who hail from Ukraine and Russia.

We will update this story as we receive more information.