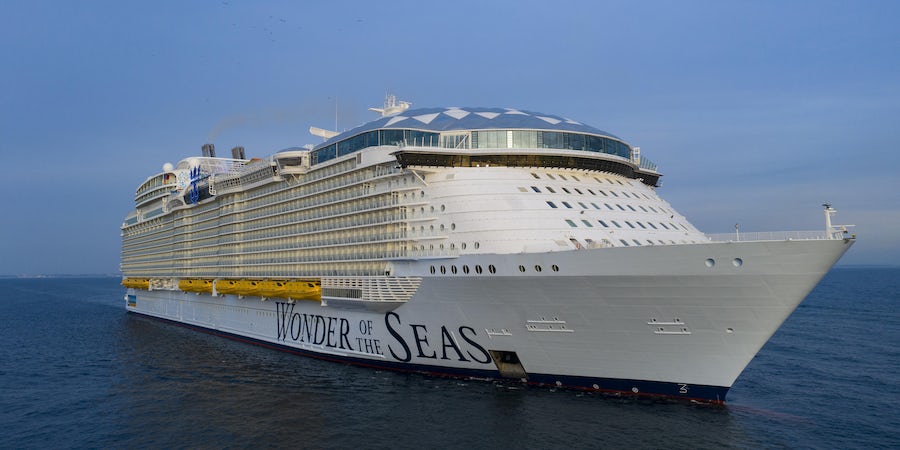 The Biggest Cruise Ship in the World, Wonder of the Seas, Has Arrived in Florida

(11:17 a.m. EST) -- On Monday evening, the largest cruise ship in the world officially arrived in the United States.

Royal Caribbean's giant Wonder of the Seas sailed into Port Everglades (Fort Lauderdale), Florida ahead of its first passenger sailing on March 4, 2022. The ship -- the fifth Oasis Class vessel to debut since Oasis of the Seas in 2009 -- is laden with superlatives. It is the biggest cruise ship in the world by gross tonnage at 236,857 gt. It is 210 feet wide -- twice the width of an average cruise ship -- and stretches to 1,188 feet in length.

Compared with Symphony of the Seas -- the past record-holder for biggest cruise ship in the world -- Wonder of the Seas bests it by approximately 8,000 tons, though its length, width and draft (the amount of the hull below the waterline) are more or less identical.

But Wonder of the Seas is far from a carbon copy of its predecessors; in fact, it introduces a number of brand-new enhancements, including an eighth new themed "neighbourhood" known as The Suite Neighbourhood, which houses the ship's top-of-the-line suites, along with an exclusive sun deck, plunge pool, bar, restaurant and private lounge.

Other enhancements include The Vue seaside bar that cantilevers out over the port side of the vessel's pool deck; a new southern-themed bar and restaurant known as The Mason Jar; and the new Wonder Playscape outdoor interactive play area.

Passengers will also find other favorite Royal Caribbean features, including the Ultimate Abyss -- the tallest slide at sea; the FlowRider surfing simulator, and the Oasis Class's iconic Central Park neighbourhood that is lined with more than 20,000 real plants.

Wonder of the Seas will sail weeklong Caribbean cruises beginning March 4 from Port Everglades before crossing the Atlantic to kick off Mediterranean cruises from Barcelona and Rome (Civitavecchia) beginning in May 2022.

Cruise Critic will be sailing aboard Wonder of the Seas' first revenue voyage on March 4 and will have live coverage from onboard the largest cruise ship in the world as it sails an Eastern Caribbean itinerary to Labadee, San Juan, Nassau, and Perfect Day at CocoCay.