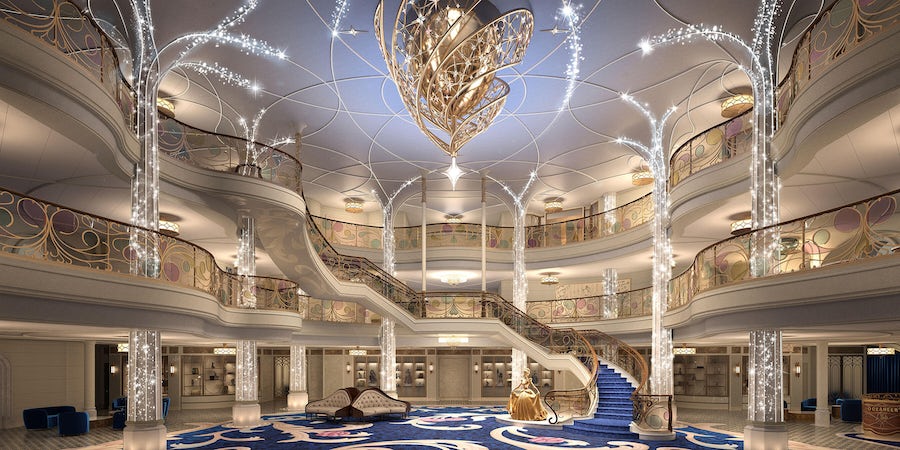 Disney is upping its entertainment game with new, first-ever offerings aboard Disney Wish. It's quite a feat considering Disney Cruise Line is already at the top of their game when it comes to interactive onboard entertainment.

For the first time ever, Disney will begin staging shows in a ship atrium space – and, since Disney Wish's Grand Hall atrium is a sparkling spectacle on its own, these shows are sure to dazzle and delight.

Sporting a delicate fairytale castle theme, the Grand Hall on Disney wish will be a flexible space used for everything from greeting and gathering space to enchanting theater productions. Guests can expect built-in special effects, a boarding celebration where passengers are given personal wishing wands to facilitate a "first wish" for their vacation, Disney Princesses onsite and a magical, final farewell show on the final night of the sailing.

Olaf's Royal Picnic Will Let You Snack, Sing and Strum With Your Favorite Frozen Characters

Families sailing on Disney Wish will be the first to attend a Frozen-themed picnic, hosted by the friendly Olaf, of course. During this brand-new experience, guests will arrive at a flower-filled hall specifically set up to mimic a summertime picnic, where they'll get to sing along to all the film's top hits right beside their favorite Frozen characters like Olaf, Anna, Elsa and Kristoff.

Olaf's Royal Picnic has been especially designed to cater to children ages three to 12 (and their parents, too), and the younger picnic participants will receive special treats, including a commemorative picnic blanket, a custom Nordic-style mandolin and other keepsakes to use during the picnic and when they are back at home.

Guests compete against Disney vIllains and other onboard families at Luna

Disney Wish will also debut Luna, a brand-new entertainment hub featuring a two-story screen, stage and bar, where families can laugh, sing – and compete – together during the different live shows. Attendees can test their wits against some of Disney's biggest villains such as Cruella de Vil, Gaston, Maleficent and more during "Villains Game Night". Guests will also have their chance to be a Disney star with the "Disney Songbook" show that basically takes karaoke to the max by adding a live camera crew that will film and project performances on a big screen. The evening wraps up with Disney Uncharted Adventure, another first-ever entertainment offering from Disney.

The new interactive experience brings personal cell phones into the mix and asks families to work together in teams to outsmart an infamous Disney foe.

For ultra-competitive guests, Disney is introducing a new concept of family play to its portfolio, and it, too, will debut on Disney Wish. Hero Zone takes an active approach to imagination in a futuristic sports arena space that will blend a top-notch show experience with sports challenges. For example, during the Incredi-Games, families will have to run, jump, roll, and slide like a member of the Incredibles through an elaborate obstacle course. This new experience will pair alongside the guest-favorite, Jack-Jack's Incredible Diaper Dash, where younger kids will crawl and compete through a tot-sized obstacle course.

Last but certainly not least, Disney Wish will also feature the line's first-ever Disney attraction at sea, a "splashtacular adventure" that combines a theatrical character dining experience with favorite friends from your favorite Disney and Pixar films. Dinner shows include a Frozen musical theater experience, action-packed cinema screening, a Broadway-style production of The Little Mermaid and a details-still-to-be-released new Star Wars experience.

"Family is at the heart of everything we do," said Laura Cabo, portfolio creative executive, Walt Disney Imagineering. "When we set out to design the next generation of Disney cruise ships, we wanted to provide families with more opportunities than ever to make lasting memories together and to experience Disney storytelling in completely new ways. Whether it's a new take on a guest favorite experience, like our signature sweets shop, or an immersive show in a first-of-its-kind venue like Luna and Hero Zone, there will be no shortage of family fun aboard the Disney Wish."

The Disney Wish will sail its maiden voyage on July 14, followed by a season of three- and four-night cruises to Nassau, Bahamas, and Disney's private island, Castaway Cay, from Port Canaveral, Florida.