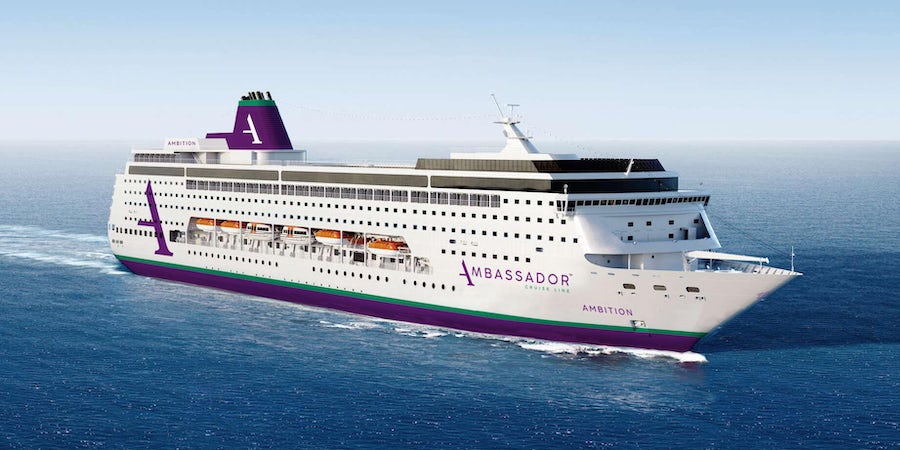 (6:31 p.m GMT) -- Ambassador Cruise Line has announced the acquisition of a second cruise ship that will enter service in 2023, the line confirmed Thursday.

The upstart British cruise line has purchased the former AIDAmira from Carnival's German-language brand AIDA and will rename the ship Ambition. Together with fleetmate Ambiance (the original Regal Princess for Princess Cruises), Ambition will offer cruises geared toward the 50-plus, ex-UK no-fly market, with departures offered from Newcastle, Dundee, Belfast, Liverpool, Bristol and Falmouth.

“We are delighted with the warm reception given to the introduction of Ambassador to the market – a new brand, proposition and our first ship," Ambassador Cruise Line CEO, Christian Verhounig said.

"This announcement of the addition of Ambition to the fleet reflects our confidence and willingness to invest in the future of Ambassador and the cruise sector. We are particularly excited to be offering regional departure options for Ambition in 2023, whilst also offering guests who travel from London Tilbury a greater choice of sailings and ships on which to enjoy them.

"Clearly, we are all focused on the success of Ambience’s maiden season which commences in April this year, but we believe existing and new guests, as well as our trade partners, will be thrilled to hear about Ambassador’s growth plans”.

Ambition will carry up to 1,200 passengers in 714 cabins, 125 of which have balconies. A further 113 accommodations are designated as suites. The ship was originally launched in 1999 for now-defunct Festival Cruises as their Mistral before going on to sail for Iberocruceros, Costa and AIDA.

The addition of Ambition to Ambassador Cruise Line's fleet effectively doubles the company's capacity and itinerary offerings. The exact deployment programme from Ambition is still being finalised, and Ambassador expects to release the first voyages for sale beginning in the second quarter of 2022.

Itineraries for Ambassador's first vessel, Ambiance, are already on offer for reservation. The line will officially enter service on April 6, as Ambiance sets sail on a debut voyage for ship and line from Tilbury to Hamburg.