You may also like
Dismiss
Hurricane Lorena in the Pacific Ocean Causes Cruise Ship Itinerary Changes
Coronavirus: Updated Cruise Ship Policies and Cancellations Because of COVID-19 (2021)
Marella Cruises Reveals New 2021/22 Itineraries to the US, Caribbean and Asia
Popular Royal Caribbean Cruise Ship To Homeport From Barbados For First Time
CDC to Make Masks Mandatory in Cruise Terminals, Cruise Ships in the U.S.
Another Big Week for Cruising in England as More Ships Set Sail, Arrive For Restart
Additional Cruise Lines Opt To Require COVID-19 Boosters
Cruise Bookings Remain Strong Despite Omicron, New Royal Caribbean Boss Says
Carnival and Royal Caribbean Cruise Lines Reinstate Smoking in Casinos
These Ships Are Coming Back To The U.S. in 2022: Here’s Why You Should Care 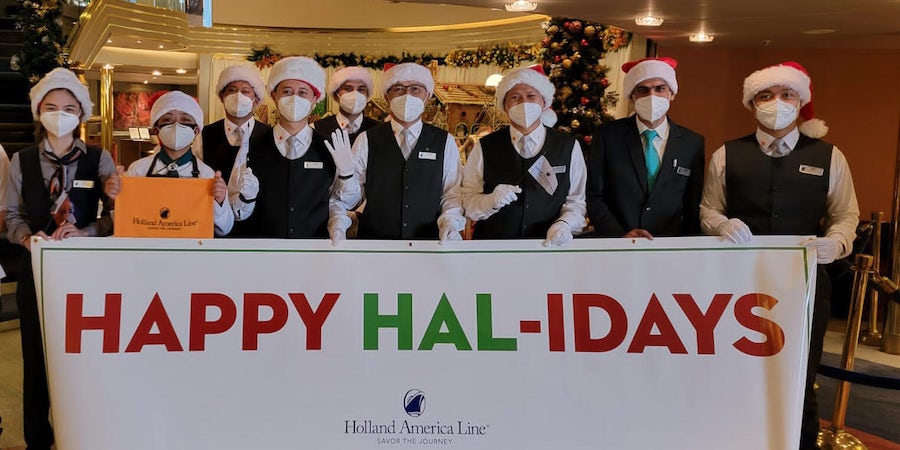 Zuiderdam, Norwegian Pearl, Enchantment of the Seas Cruise Ships Return to Service in Time for Holidays

It's a positive sign in the cruise industry's restart plans, even as the omicron variant of COVID-19 continues to create uncertainty in the short-term.

To commemorate the special occasion, Holland America went all-out, reigning in Santa and his elves to be on-hand for embarkation of the ship's first passengers in nearly two years. Passengers boarded Zuiderdam bound for the Mexican Riviera to the tune of ringing sleighbells. Zuiderdam is on a 10-night Mexico and Sea of Cortez itinerary over the Holidays, with a Panama Canal transit and 35-day "South Pacific Sojourn" to follow.

"San Diego is an important homeport for us, and we are excited to have two ships back in full-time operation here with the restart of Zuiderdam today,” said Gus Antorcha, president of Holland America Line. "We are proud to be part of the San Diego community, which has continued to show us tremendous support throughout our restart. There’s no better way to kick off Zuiderdam’s season than with a holiday cruise full of joyful guests and our grateful crew who are happy to have them back on board."

Holland America has long made San Diego its winter homeport, with a presence in the city that dates back to the 1990's. From the city, Holland America offers passengers cruises to Hawaii, the Mexican Riviera, the Panama Canal, South Pacific, and Pacific Coastal journeys to and from Vancouver, Canada. It expects to bring 81,000 passengers to San Diego over the course of 2022 and inject some $35-million into the local economy.

With the restart of Zuiderdam, Holland America now has six ships back in service, including the brand-new Rotterdam, which made its U.S. debut in November.

Also resuming service just days before Christmas is Norwegian Cruise Line's Norwegian Pearl. Sailing from its homeport of Miami, Norwegian Pearl sets out first on an 11-day Caribbean and Panama Canal itinerary that is repeated throughout the winter.

Interspersed between these 11-day journeys are a handful of shorter five-and-three-night sailings that call on Great Stirrup Cay, Harvest Caye, or Costa Maya.

Enchantment of the Seas Cruises from Baltimore

Finally, on Thursday Royal Caribbean also restarted cruises from Baltimore aboard Enchantment of the Seas.

The 1996-built Vision Class ship will offer cruises to the Caribbean and the Bahamas initially, followed by spring and summertime voyages to Canada and New England and Bermuda. It sets out on December 23 for Nassau and Freeport, with additional calls on Port Canaveral (Orlando) and Key West.

The return of Enchantment of the Seas is also noteworthy as it marks the first time the ship has sailed from Baltimore since 2013.

While Royal Caribbean has temporarily paused bookings on near-term voyages into mid-January across its fleet to limit capacity onboard in recognition of the omicron variant of COVID-19, Enchantment of the Seas' future itineraries are available to book -- including summer 2023 cruises when the ship makes a rare return to Vancouver, Canada and Alaska.