You may also like
Dismiss
Coronavirus: Updated Cruise Ship Policies and Cancellations Because of COVID-19 (2021)
Did Ed Sheeran Name His Baby After Antarctica Cruise?
Wave Season Cruise Deals 2021
P&O Cruises Restarts Cruising For First Time in 15 Months on Britannia
Another Big Week for Cruising in England as More Ships Set Sail, Arrive For Restart
Norwegian Breakaway Cruise Ship Returns To New York: We Chat With NCL President Harry Sommer
MSC Virtuosa to Return for Line’s Biggest Ever UK Season, MSC Cruises to Base Ship in the UK Year Round in 2022
Additional Cruise Lines Opt To Require COVID-19 Boosters
MSC Cruises Extends Seasons of MSC Virtuosa Cruise Ship in the UK, MSC Bellissima in Dubai
A 'Thor: Love and Thunder' Cameo That Gets Cruise Fans Excited 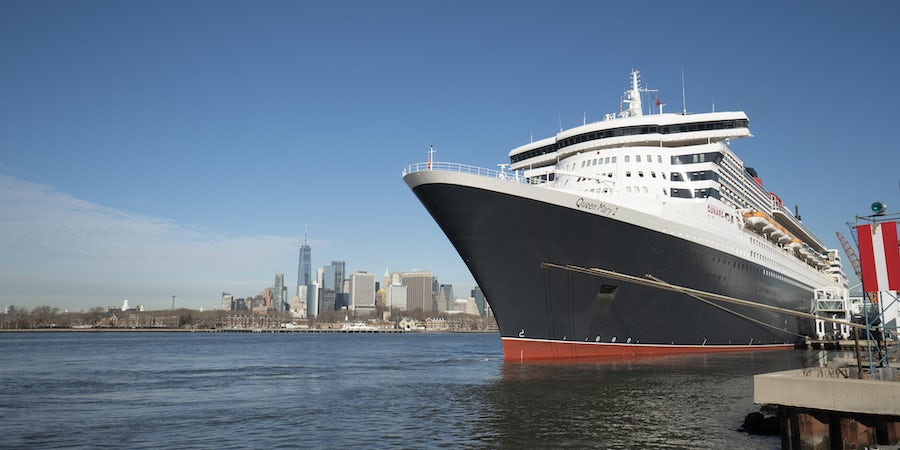 (10:20 a.m. EST) -- Cunard Line passed a major milestone early Monday morning, as its flagship, Queen Mary 2, sailed under the Verrazano Narrows bridge and came alongside at Cunard's Red Hook pier in Brooklyn for the first time in nearly two years.

Queen Mary 2 -- the only modern ocean liner in existence -- departed Southampton, England on December 13 on its first westbound transatlantic crossing since the COVID-19 pandemic began in March of 2020. After spending the day at Red Hook, it will depart Brooklyn bound for the Caribbean, returning on December 22, 2021.

Cunard's flagship returned to service less than a month ago, setting out on November 28, 2021, on its first revenue sailing in 19 months. Monday marked the first time a Cunard vessel has called on a U.S. port of call since the pandemic began.

Queen Mary 2 returns to New York on January 3, 2022, for its first eastbound transatlantic crossing to Southampton in two years. Throughout the winter and spring, the ship will make several crossings between Southampton and New York, with a handful of voyages beginning in Hamburg, Germany.

Throughout 2022, Cunard will continue to offer sailings from Brooklyn aboard Queen Mary 2, including the line's themed transatlantic crossings that include Cunard's annual Fashion Week at Sea; London Theatre at Sea with the Olivier Awards; Art and Design Week; Anthony Inglis and the National Symphony Orchestra; and the first Literature Festival at Sea crossing on December 3, 2022.

The line -- originally founded in 1840 by Samuel Cunard -- has now returned two of its three vessels to service. The smaller Queen Elizabeth entered service this past summer in the UK, while sister-ship Queen Victoria will re-enter service on a five-night cruise from Southampton to Amsterdam on April 22, 2022.

Cruise Critic will sail onboard Queen Mary 2 in February from Southampton to New York for one of the liner's famous winter crossings. Stay tuned for more coverage from Cunard's iconic flagship in the New Year.