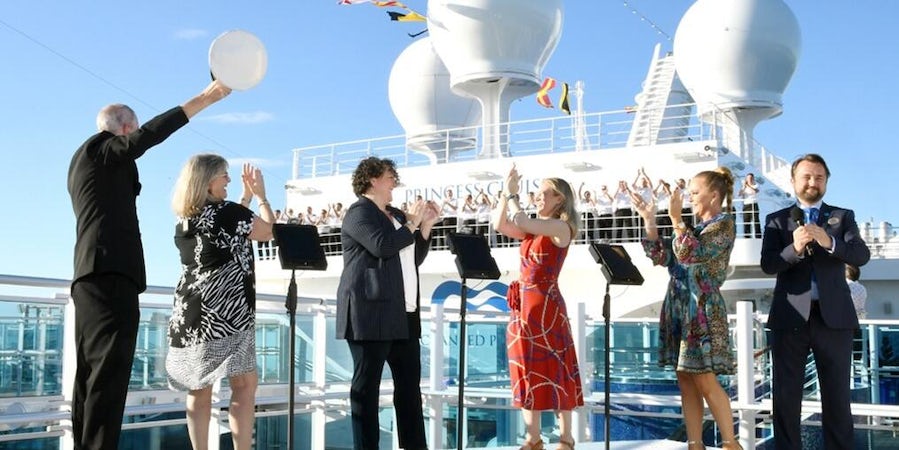 (10:10 a.m. EST) -- Enchanted Princess, the newest ship from Princess Cruises, has been christened in an original video production released on YouTube and Facebook on December 13.

Danaher is a cofounder of the Pacific Islands Research Association and has completed eight Explorers Club Flag Expeditions. She is an officer of The Explorers Club. An oceanographer, Ferrini is a senior research scientist at Columbia University's Lamont-Doherty Earth Observatory and has been named to the Explorers Club 50 -- 50 explorers changing the world. In her 14 years at Google, Austin co-led the team that developed the first virtual map of the ocean with Google Earth and Google Maps; she also launched Underwater Streetview in Google Maps and Global Fishing Watch before starting Oceanagenda.com.

The three women were brought together for the filming in early November before Enchanted Princess made its first revenue sailing. Cruise Critic was able to get an exclusive peek at the new ship, and has also sailed on Enchanted Princess on its current itineraries in the Caribbean.

Enchanted Princess is the fifth vessel in the line's Royal-class, and debuted with Princess Cruises' MedallionClass technology built into the ship that allows for passengers to digitally control most aspects of their cruise vacation. Having a video naming is also unique, Princess Cruises President John Padgett said, because it is "letting us share the excitement of the ceremony with more people than ever."

"It also allows us to recognize the contributions our godmothers have made to ocean conservation and stewardship, as the ocean provides our livelihood and serves as the home for our more than 25,000 employees."

Padgett is in the video, as is Group President Jan Swartz and Enchanted Princess captain Commodore Nick Nash.

But the real star of the show is the 3,560-passenger ship. After its inaugural Caribbean winter season, Enchanted Princess will move to Europe in April 2022 to sail Scandinavian itineraries roundtrip from Copenhagen.