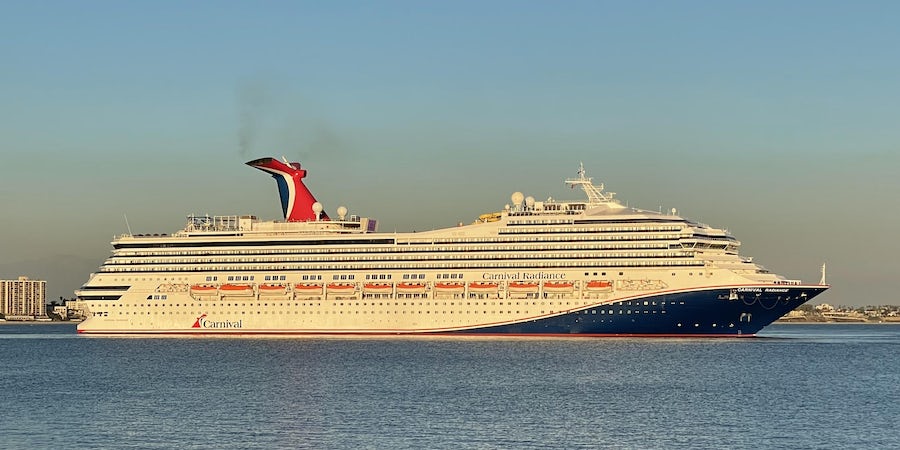 Originally introduced in 2000 as Carnival Victory, the third in the Carnival Destiny (now Carnival Sunshine) class, Carnival Radiance has just emerged from a $200 million stem-to-stern revamping in Cadiz that saw the addition of 110 new suites and staterooms, as well as a complete overhaul of all remaining public spaces and accommodations.

In keeping with the event's "We Are Family" theme, O’Neal’s mother, Dr. Lucille O’Neal served as the ship’s godmother, headlining a ceremony in the Liquid Lounge showroom hosted by Carnival’s Brand Ambassador and Senior Cruise Director John Heald.

Following a rendition of the national anthem by cast member Harriet Richardson, invocation speeches by Rabbi Moishe Engel and Carnival President Christine Duffy, Shaquille O’Neal introduced his mother, who ad libbed with a rousing speech about self- empowerment and joked about "working very well with the Chief Fun Officer." She also shared that she had never been on a cruise before but was looking forward to "taking a ride."

Duffy then presented Dr. O’Neal with a $25,000 check from Carnival for O’Neal’s favored charity, the Odessa Chambliss Quality of Life Fund, which provides nursing scholarships. Finally, after Heald led the audience in a countdown, Dr. O’Neal poured a bottle of champagne over Carnival Radiance’s bell as streamers fell, the audience cheered and the ship’s company took the stage with an energetic rendition of the 1979 Sister Sledge hit, "We Are Family."

Today, Carnival Radiance embarks on its inaugural cruise, a four-day Catalina and Ensenada itinerary that it will alternate with three day cruises to Ensenada. With the debut of the Carnival Radiance, Carnival now has three ships sailing out of Long Beach, including Carnival Miracle, which sails four, five and fourteen day cruises to Ensenada, Catalina and Hawaii, and Carnival Panorama, which offers a seven day Mexican Riviera itinerary calling on Cabo San Lucas, Puerto Vallarta and Mazatlan.

The West Coast has seen a resurgence in cruising for 2021, moving into 2022. Reasons range from pent-up demand from COVID-19 lockdowns to easy access from major population centers such as Los Angeles, Las Vegas, Phoenix and Pacific Northwest cities such as Portland and Seattle.