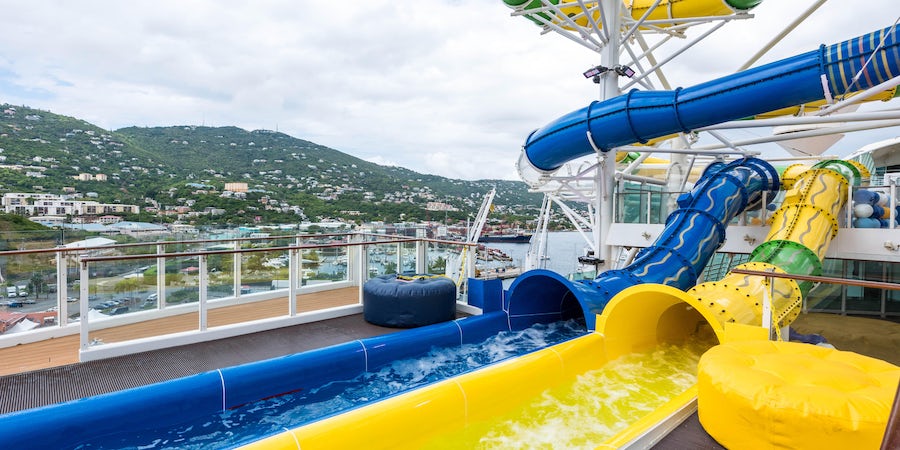 The Perfect Storm on Adventure of the Seas

Is a New Hurricane Water Slide Coming to Royal Caribbean?

The Perfect Storm on Adventure of the Seas

(2:28 p.m. EST) -- Royal Caribbean has filed trademarks for names that include Hurricane Hunter and Storm Surge. There are also filings with the U.S. Patent and Trademark Office for the names Category 6, Pressure Drop and Storm Chasers.

The discovery was first made by the popular Royal Caribbean Blog website.

There was no explanation filed for the new names, but they do seem in the realm of the Perfect Storm, the name of the line’s existing waterslide areas on Adventure, Harmony, Independence, Liberty, Mariner and Symphony of the Seas. The Perfect Storm slides are known as Cyclone and Typhoon.

In the same batch of filings, Royal Caribbean also trademarked the name "Perfect Storm". All six filings were under the category of “cruise ship services.” There were no additional details.

Unlike competitor Carnival Cruise Line, Royal Caribbean does not have waterslides on all its ships. Only new and heavily-renovated vessels boast the line's expansive waterpark options.

Royal Caribbean’s onboard waterslides include the newly added Riptide, a head-first slide where you hurl through a translucent tube; and The Blaster, which uses water jets to propel guests -- including on an 800-foot stretch. Both are on Navigator of the Seas.

Liberty of the Seas has what is billed as the first boomerang slide at sea, Tidal Wave – which includes being flung off a ramp.

Royal Caribbean also has waterslides in the Thrill Waterpark at its private Bahamas island, Perfect Day at CocoCay, including the 135-foot Daredevil’s Tower, the "Tallest slide in North America.”