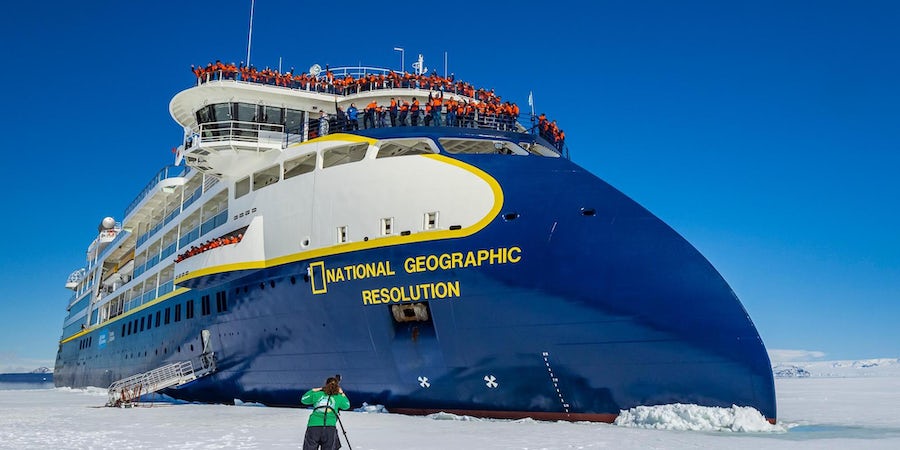 (12:05 p.m. EST) -- It's been a busy week in the small ship expedition cruise world, with news from Lindblad Expeditions, Swan Hellenic, and upscale expedition line Ponant -- all of which are either welcoming new ships into their fleets or resuming cruises to far-flung locales.

Lindblad Expeditions welcomed its second polar newbuild, National Geographic Resolution, in a decidedly unique way this week, opting to christen the ship while it was parked on fast ice in the Weddell Sea during its current voyage to Antarctica.

The term "fast ice" refers to ice that is attached to the coastline and does not move with currents -- making for a unique place to come alongside in the Southern Continent.

Wedged into the ice on Duse Bay, passengers were invited onto the ice to watch and enjoy a champagne toast as Captain Heidi Norling christened the 126-passenger ship. Passengers and crew were also joined by some unusual guests during the ceremony, namely some Adelie and gentoo penguins.

“I wish this ship calm winds, fair seas, and great adventures. May everyone who sails with her be blessed,” said Captain Norling.

Expedition line Swan Hellenic came one step closer to re-entering operations with its sturdy newbuild, SH Minerva, as the ship was christened this week at the Finnish shipyard where it is currently under construction.

Swan Hellenic -- which ceased operations 2017 but was resurrected in the summer of 2020 -- officially christened SH Minerva at Helsinki Shipyard on November 23, with Johanna Makela, Finland's first professor of food culture and wife of Helsinki mayor Juhana Vartiainen acting as the vessel's godmother.

"I would like to congratulate everyone at Helsinki for their impeccable work in difficult circumstance and the tight safety measures which have kept SH Minerva a safe environment at all times," said Andrea Zito, CEO of Swan Hellenic. "The vessel has been completed after only 26 months from the signing of the contract which is a remarkable achievement."

SH Minerva is scheduled to depart the shipyard during the last week of November, and enter service on its first revenue voyage -- a 16-day Antarctica and South Georgia expedition departing roundtrip from Ushuaia, Argentina -- on December 22.

Ponant Resumes Cruises to the Seychelles

French upscale cruise operator Ponant officially resumed its itineraries to the Seychelles on November 18, with Le Bellot departing from Mahe on an eight-day itinerary through the exotic islands.

"After long months of waiting, we are more than prepared to resume our operations in the Seychelles," says Herve Bellaiche, chief sales, marketing and communications officer with Ponant. "We’ve been taking guests to discover this paradise on earth for almost 20 years. We are happy to be able to actively contribute to relaunching tourism in the Seychelles."

Le Bellot will be joined by two other vessels in the Seychelles for the winter 2021-2022 cruise season, with Le Bougainville and Le Jacques Cartier arriving to jointly operate five itineraries and 19 separate voyages between now and April 2022.

Ponant -- which caters to international passengers looking for uncommon experiences aboard ships filled with plenty of French panache -- also has its winter 2022-2023 itineraries in the Seychelles available for reservation at this time, with 18 separate cruises on offer.