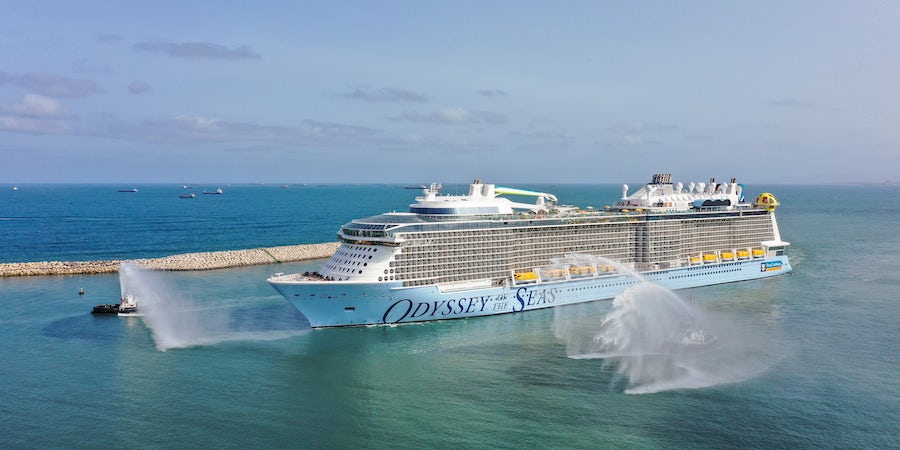 (6 a.m. EST) – Odyssey of the Seas, the newest cruise ship from Royal Caribbean, was officially christened on Saturday in a naming ceremony in Fort Lauderdale.

Delayed a year because of the COVID-19 pandemic, the 4,198-passenger ship launched in July 2021. The Quantum Ultra-class ship boasts all of the innovations of that class, including the Two70 space, the SkyPad virtual reality trampoline; the RipCord by iFly sky diving simulator; the North Star capsule and the largest SeaPlex indoor complex of the Royal Caribbean fleet.

Cruise Critic sailed on Odyssey of the Seas in August 2021, and determined that it was impossible to be bored on the vessel. Sports fans will be pleased by the addition of Playmakers Sports Bar and Arcade, which contains an incredible 56 hi-def TV screens, as well as an impressive la carte menu of bar snacks.

The godmother for Odyssey of the Seas is Erin Brown, a para-triathlete from The Bahamas. Brown, 41, lost part of her leg to bone cancer, yet went on to compete in the Paralympic Game Qualifiers. She also works as an advocate for rights for the disabled and works at the University of the Bahamas as a compliance officer and counselor.

"From the moment we heard Erin's story, how her courage and determination inspired others and led to a more inclusive consciousness about succeeding with disabilities, we were moved and knew she was a natural choice for Godmother of our newest ship," Royal Caribbean President and CEO Michael Bayley said when Brown was announced earlier this month.

The christening featured speeches from Bayley, as well as Royal Caribbean Group CEO Richard Fain, who announced last week that he is leaving the company after a 33-year career.

Odyssey of the Seas is the first Quantum Ultra-class ship to homeport in the U.S. (the first, Spectrum of the Seas, was designed for the Asian cruise market and is currently based in Hong Kong; it will transfer to Singapore in 2022).

The ship is sailing different itineraries in the Caribbean from now through spring 2022. Odyssey of the Seas will transition to Rome for Mediterranean cruises in May 2022.