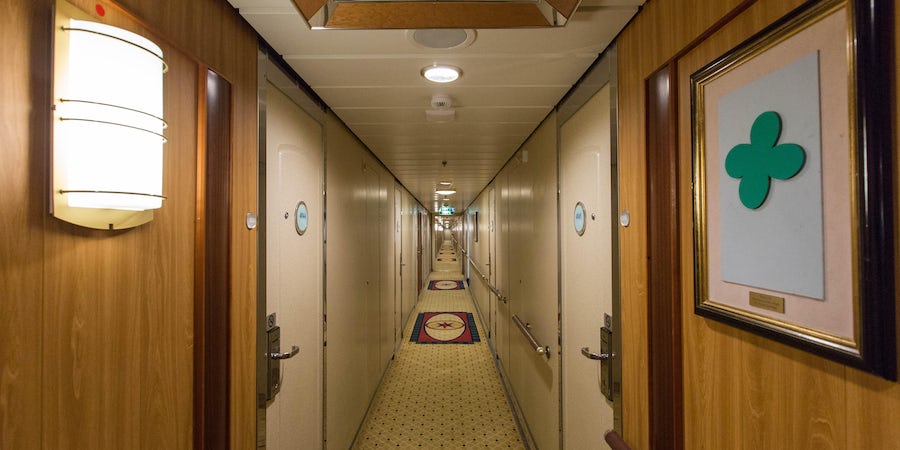 Hallways on Radiance of the Seas

Hallways on Radiance of the Seas

(10:29 a.m. EST) -- We’ve seen cabin doors on cruise ships that unlock as you approach, thanks to a wearable device, and that you can open via an app on your smartphone. Now Royal Caribbean Group seems to be experimenting with doors that open when they recognize your face.

The cruise company filed a U.S. patent application on Thursday for a “multifunction smart door device” that would control access to a stateroom “based on facial recognition or a wireless credential.”

According to paperwork filed with the U.S. Patent and Trademark Office, the device may be part of a system installed “within or near stateroom doors of a cruise ship.” The device would have a wide-angle camera and use face recognition software to recognize who you are and whether or not you should have access to the cabin. Smart door device functionality “may be implemented in part by customers' mobile devices,” the line said.

Currently, most Royal Caribbean guests use their traditional SeaPass cards to get into their cabins -- though on select ships there is also the option of using the Royal app on your smartphone to unlock your cabin door. Passengers on sister line Celebrity Cruises ships may also use an app to enter their cabins (and control other functions such as turning on lights, adjusting temperature and opening or closing the shades).

In addition to opening your door, the new shipboard device may perform functions such as personalizing stateroom features (including climate control and light settings).

As a safety feature, the smart locks would allow only crew members whose face is recognized to enter the cabin. In addition, a video camera configured to “capture video footage of the public area of the cruise ship adjacent to the door of the stateroom.” Guests in the stateroom would be able to see the video footage as a live stream on their smartphones, just like you would with a wireless home security system.

Data obtained by smart door devices “can be provided to the cruise operator for service, safety, or security purposes, such as for anonymized foot traffic analysis, hazard detection, and stateroom access auditing,” Royal Caribbean said in its filing.