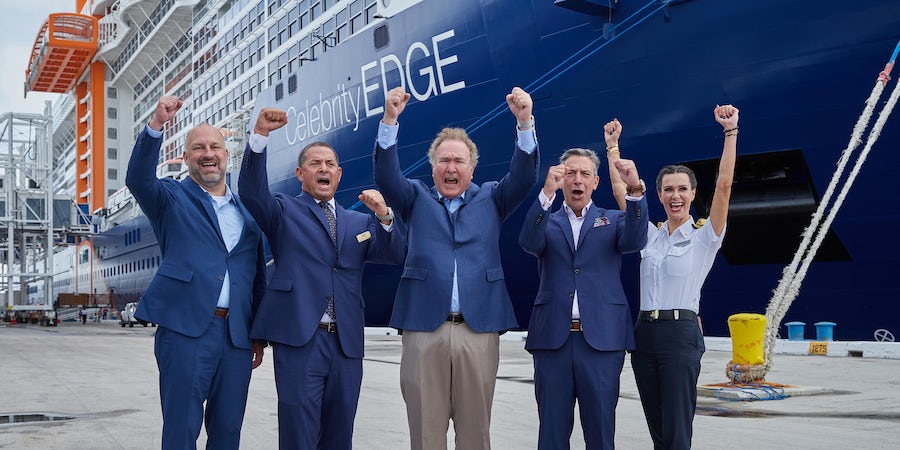 (11 a.m. EST) -- If you like big cruise ships with rock climbing walls, ice skating rinks, high-diving acts, bumper cars, carousels, moveable platforms and a whole lot of other "wow" attractions, thank Richard Fain, 74, who today announced he is stepping down after more than three decades at the helm of Royal Caribbean Group.

The company's CEO is a visionary, never shy of cruise ship innovations some would have dismissed as crazy. Brilliant and with a twinkle in his eye, Fain in many ways shaped modern cruising. He launched revolutionary ships with groundbreaking features enjoyed by millions of cruisers.

With cruising shut down temporarily by COVID-19, Fain, with his calm and cool demeanor, led from the front with his weekly video messages delivered from his garden in Miami, his usually short hair growing ever bigger as the pandemic wore on. He has been the industry's prominent face as cruising has returned post-pandemic. His message: With vaccination requirements, testing and other health and safety protocols now in place, cruising is the safest vacation you can choose.

Fain joined Royal Caribbean in 1988, in time to launch the 2,278-passenger Sovereign of the Seas as the largest passenger ship in the world.

After overseeing the company going public on the New York Stock Exchange in 1993, he then went for even bigger ships.

But Fain wasn’t done there. When he gleefully showed off Oasis of the Seas at a shipyard in Turku, Finland, he jokingly declared "that's a really big ship" -- it was -- the 226,838-ton ship is able to carry more than 6,000 passengers in seven "neighborhoods," including a Central Park with real trees. Oasis has been followed by three sister ships, each claiming the title of "biggest cruise ship in the world." Wonder of the Seas, the latest in the Oasis Class, will claim the mantle when it debuts next year.

For the later Quantum-class launch, the line went with slightly smaller but more technologically advanced 4,180-passenger ships -- with fun features such as robotic bartenders, virtual reality experiences and simulated skydiving.

Fain also drove the line's acquisition of private islands and oversaw the recent multimillion-dollar conversion of the Bahamian island of CocoCay, into Perfect Day at CocoCay, complete with a thrill waterpark, a very tall waterslide and other land-based attractions.

"Richard has been a visionary leader who has made innumerable and remarkable contributions to our company and our industry," said Bill Kimsey, lead director of the Board. "Most recently, his stewardship during the COVID pandemic marks him as one of the great CEOs of his generation. The cruising community and all of us in the company owe him a debt of gratitude."

Fain said: "There are no words to express my admiration and appreciation to the people of the Royal Caribbean Group, who have been the real drivers of our success; and my profound appreciation for the support and guidance of the Board of Directors during good times and bad throughout this long period of sustained growth."

He said that with most of the Group's ships operating, a full return to cruising approaching, and the Group's brands under the leadership of exceptional CEOs, it was the right time to step down.

“Given the great depth and breadth of our leadership, and the positive outlook for our business, this is the appropriate time to step aside and have Jason take over," Fain said. "He is a highly versatile and strategic leader, who has been integral to all aspects of the company’s accomplishments and performance."

Liberty joined the Royal Caribbean Group in 2005 and served in several financial, strategic and operational roles before becoming CFO in 2013. His operational duties have expanded over the years and he is also responsible for Silversea Cruises; the Group's joint ventures with TUI Cruises and Hapag-Lloyd Cruises, as well as Royal Caribbean Group's strategy, technology, supply chain, port operations and legal functions.

Sunshine3601: "Will miss his wonderful informative videos that got us through COVID shutdown. Time to retire and enjoy life."

not-enough-cruising: "I find this a bit concerning, often times it is not good for the customer experience when somebody from the finance department takes over. I hope we don't see a lot of belt tightening, and degradation of services and or quality in the interest of enhancing our experience."

Heymarco: "I just saw that, not sure how I feel about CFO taking over. More penny-pinching in the future for sure."