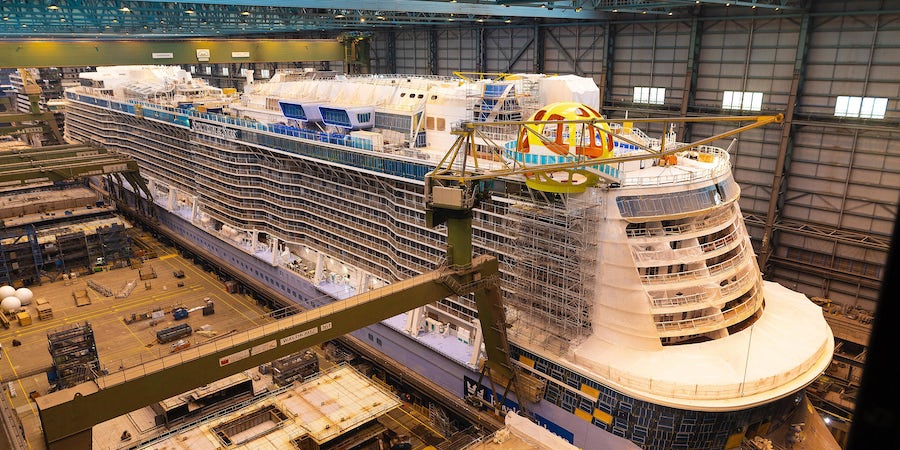 Spectrum of the Seas Under Construction at the Meyer Werft Shipyard in Papenburg, Germany (Photo: Royal Caribbean International)

Spectrum of the Seas Under Construction at the Meyer Werft Shipyard in Papenburg, Germany (Photo: Royal Caribbean International)

“COVID-19 has impacted shipyard operations which has and may continue to result in delays of our previously contracted ship deliveries,” the company stated in its third-quarter earnings filing with the U.S. Securities and Exchange Commission (SEC).

Royal Caribbean’s Wonder of the Seas, the latest largest ship in the world, left the Chantiers de l'Atlantique shipyard in France last week, and is set to enter service in March 2022, from Fort Lauderdale. The ship was originally supposed to debut in China in 2021. As previously announced, it’s as-yet-unnamed Oasis-class sister ship will not arrive until the second quarter of 2024, the company said.

Royal’s first Icon-class ship, Icon of the Seas, will be delivered as scheduled in fall 2023, a year later than originally planned. It’s unnamed sister ships are set to launch in the second quarter of 2025 and 2026. The ships are the first in the fleet to run on cleaner-burning Liquified Natural Gas (LNG).

Celebrity Beyond debuts next year as the third Edge-class ship. A fourth sister ship will join the fleet in late 2023. A fifth Edge-class ship, originally set to debut in 2024, is now expected in 2025, conditional on financing.

German line TUI’s next ship, Mein Schiff 7, originally slotted to set sail in spring 2023 has now been delayed until in 2024.

The combined total berths for the new ships is nearly 48,000.