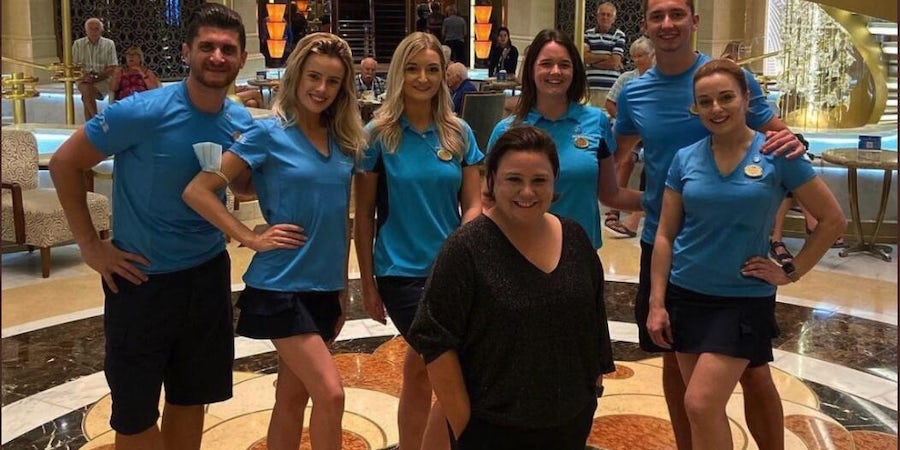 "Cruising With…" Set to Return Next Year -- But Without Jane McDonald

(11:35 a.m. GMT) -- After a COVID-related pause in production, Channel 5 series "Cruising With…" is set to make its return with Scottish comedian Susan Calman.

The new show, which follows the format of the wildly popular "Cruising With Jane McDonald", will be called "Cruising With Susan" and will hit our screens early in the New Year.

Calman was due to take over last year, but filming had to be put on hold throughout the pandemic.

She made the announcement on Twitter in September: "In compliance with all rules, regulations, vaccines, tests and insurance requirements, #CruisingWithSusan has finally started. I’m on the high seas and it's beautiful."

And then on October 20 posted another tweet with an accompanying image (above), stating:

"Every episode of the new #CruisingWithSusan ends with a dance routine involving the crew and it’s reassuring to have some professional dancers with me!! They’re fabulous. I try my best. Wonderful team on Princess!!"

Calman sailed on a Canary islands cruise in October on Regal Princess, dancing to "Copacabana" on the main pool deck at the end of the episode -- in an homage to Jane, who would sing at the end of every episode of "Cruising With Jane McDonald".

"Really excited that Channel 5 and Susan Calman were onboard the ship filming and we can't wait for avid cruisers to tune in next year," said Tony Roberts, Princess' UK & Europe boss, onboard Regal Princess.

Princess has featured heavily in the series -- this is the fourth time the line has hosted Channel 5 onboard.

Roberts said crew and passengers were excited to be sailing with the Scottish comedian and avid cat lover.

In addition to being a regular voice on BBC Radio 4 comedy programmes and fronting the travel show "Secret Scotland with Susan Calman", the comedian currently appears in "Antiques Adventures" and "Susan Calman's Grand Day Out", both on Channel 5.

Cruise Critic understands that Calman will also be sailing with Norwegian cruise line Hurtigruten next month along the Norwegian coastline.