You may also like
Dismiss
2019 Atlantic Hurricane Season Outlook: What Cruisers Need to Know
Coronavirus: Updated Cruise Ship Policies and Cancellations Because of COVID-19 (2021)
Rolling Out the Deals: Why Now Might Be a Great Time to Book a Cruise
Cruising the Newest Ship Afloat: Live From Celebrity Apex
Live From Royal Caribbean's Odyssey of the Seas: Why You'll Never Be Bored on This Cruise Ship
Royal Caribbean's Odyssey of The Seas Cruise Ship Officially Christened
Disney Wish To Feature New Onboard Entertainment Firsts from Disney Cruise Line
These Ships Are Coming Back To The U.S. in 2022: Here’s Why You Should Care
Royal Caribbean Showcases New Icon of the Seas Cruise Ship with 'Making an Icon' Video Series
Just Back From Allure of The Seas' Maiden Galveston Sailing: Hits and Misses 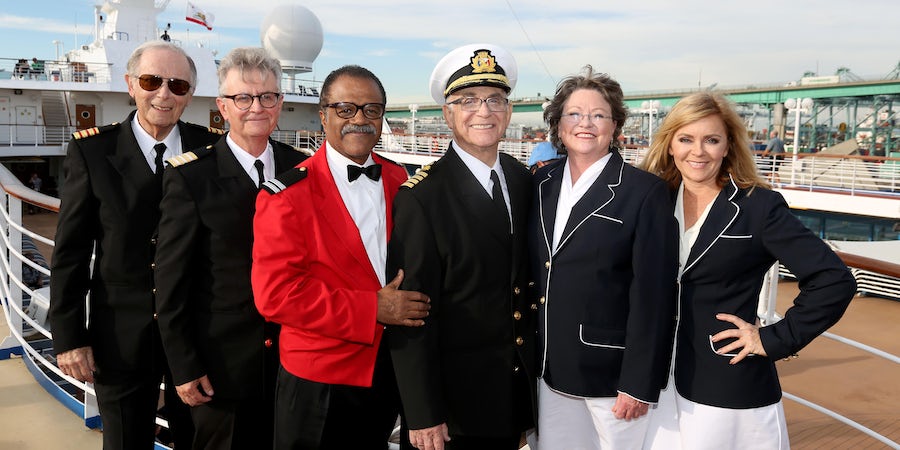 (4:40 p.m. EDT) -- "Come aboard, we're expecting you" ... on a special Love Boat theme cruise with most original cast members from the popular TV series from the 70s and 80s, on Princess Cruises.

The weeklong cruise to the Mexican Riviera will take place from February 26 to March 5 on Majestic Princess, leaving from the Port of Los Angeles.

The sailing will feature a special tribute to actor Gavin MacLeod, who played the iconic role of Captain Stubing on the series. MacLeod, who served as Princess Cruises' brand ambassador for more than 35 years, passed away in May 2021, at age 90.

The rest of the original cast -- Jill Whelan (Vicki), Cynthia Lauren Tewes (Julie McCoy), Bernie Kopell (Doc), Fred Grandy (Gopher) and Ted Lange (Isaac) -- will all be onboard for the theme cruise.

During the cruise, the actors will share favorite members from the show and participate in different guest activities. These include the sailaway party; a special 1970s-inspired Love Boat Disco deck party; a vow renewal ceremony; Love Boat trivia; cast photo ops; Love Boat-themed menus and cocktails and Love Boat episodes airing on the top deck with Movies Under the Stars.

The cruise is being held over MacLeod's birthday, February 28 -- Leap Day -- and there will be a celebration to honor him, as well as a Q and A with the cast.

"Reuniting with the cast for this very special themed Love Boat cruise and celebrating the show's lasting impact with guests is sure to be nostalgic, fun and incredibly memorable," said Whelan, who is the current Celebrations Ambassador for Princess.

"While we always love to connect with fans this cruise will be extra special because we will also celebrate the life and career of Gavin, our fearless leader, who not only played my dad on TV but was also a true father figure to me beyond the show."

The ports for the cruise -- Puerto Vallarta, Mazatlan and Cabo San Lucas -- will also be nostalgic to Love Boat fans, as the 10-year TV series was set often in the Mexican Riviera.

Beyond the ports and the cast, Princess Cruises has embraced the show numerous times since it aired. The entire cast served as godparents for two ships, Dawn Princess in 1997 and Regal Princess in 2014. They most recently sailed together on a throwback cruise in 2015 that celebrated the line's 50th anniversary.