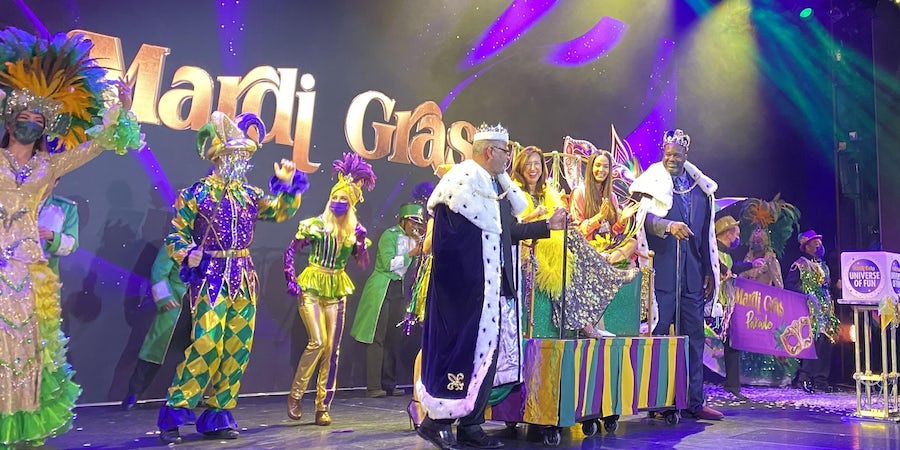 (10:12 a.m. EDT) -- New Orleans’ Mardi Gras parade is no longer a land-only celebration. At the official naming ceremony of Carnival Cruise Line’s Mardi Gras -- held onboard the ship on Saturday in Port Canaveral -- godmother and Miss Dominican Republic, Kimberly Jiminez, christened the line’s newest ship with a button-activated bottle of Champagne smashing against the hull before jumping into a masquerade march in the ship’s main theater.

Alongside a colorful line of costumed dancers and brass musicians, Jiminez "floated" around the stage with the line’s chief fun officer, Shaquille "Shaq" O’Neill; president Christine Duffy; and CEO of Carnival Corporation, Arnold Donald. The tribute to New Orleans’ long-standing tradition was the cherry on top at an event filled with emotional speeches, standing ovations and sprinkles of humor from none other than Carnival’s senior cruise director and brand ambassador, John Heald.

"I grew up in New Orleans, where Mardi Gras is the signature event every year, bringing the entire community together," said Donald during the ceremony. "Mardi Gras has a special meaning to me. It reminds me of fun, which is what we stand for here; great music; entertainment; reverie; hurricane cocktails and community joy just from being together."

The line’s largest ship yet -- the first of Carnival's new Excel Class that is able to carry 5,282 passengers at double occupancy and operates on Liquefied Natural Gas (LNG) fuel -- was christened more than a year after it was initially scheduled to debut. The postponed event follows a series of COVID-19-related delays that have affected the cruise and travel industry.

"This ship has been a symbol of great excitement and renewal for our company," said Duffy.

With Mardi Gras’ arrival marking 13 Carnival ships now back in revenue operation, "Our ships are generating fun for our guests, jobs for our shipboard teams, economic activity for the homeports and destinations that we bring our ships to, and a bright future for our company," noted Duffy.

Duffy continued by confirming Carnival’s plans to have 17 ships operating by December 2021, 19 ships by February 2022 and the remaining five in the months following.

What drew the most applause during the event, however, was the honoring of Carnival’s Veteran passengers and the palpable spirit of giving. Heald called onto stage a father and daughter duo who served in the Korean War and Navy, respectively, and were onboard celebrating milestone anniversaries. The two stood next to Miss USA, Asya Branch, as she sang the National Anthem with passion and poise.

Carnival, which supports and also collects proceeds for St. Jude Children’s Research Hospital, showcased a behind-the-scenes video on some of Mardi Gras’ new artwork. Sculptures on the ship represent recreations of drawings by St. Jude patients in an effort to bring hope and make them feel more connected to the world.

Complementing the line’s efforts are those of its godmother. The audience was similarly moved learning about Jiminez’s own efforts in her home country. Jiminez is committed to helping orphaned children in her hometown of La Romana, who’ve been victims of abuse and homelessness. She’s also a founder of the Dominican Republic Women’s Club, which provides services to women with breast cancer.

The naming ceremony sailing will be the first time Jiminez sails into the Dominican Republic, when the ship calls at Amber Cove this week.

Bringing communities together, as Donald described during his speech, evidently has multiple meanings on Mardi Gras. The ship not only connects people through its diverse “neighborhoods” and celebratory spirit, but Saturday's ceremony indicated it also inspires giving and gratitude.

To kick off the ceremony, a small group of Carnival executives, media and local dignitaries gathered at Shaq’s Big Chicken for the restaurant’s ribbon-cutting. While attendees sampled bites from the first at-sea outpost of the land-based eatery, Shaq and Duffy chowed down on lunch over laughs and good conversation.

In addition to Shaq’s Big Chicken and the new-to-Carnival concept of neighborhoods, Mardi Gras features the industry’s first roller coaster; Excel suites with sweeping, wraparound balconies; an Emeril Lagasse-helmed bistro; a seafood restaurant overseen by the company’s master chef, Rudi Sodamin; a full-sized pool in the popular adults-only Serenity Deck; and a slew of other never-before-seen amenities that meld with longtime, fan favorites.

Mardi Gras sails Eastern, Western and Southern itineraries -- varying in length between six, seven and eight nights -- from its homeport of Port Canaveral. Cruises continue to sail at 70-percent capacity, in compliance with the line’s COVID-19 protocols.

Following in Mardi Gras’ footsteps (er, wake), the next Excel-class ship named Carnival Celebration is scheduled to debut in Miami next year. Duffy hinted the name and homeport of Carnival’s third Excel-class ship, slated to enter service in 2023, would be revealed in the near future.