You may also like
Dismiss
Live From MSC Cruises' MSC Grandiosa: What's it Like Sailing on a Big Ship in the COVID Era?
Australia Extends Ban on Cruises to March 17, 2021
P&O Cruises Restarts Cruising For First Time in 15 Months on Britannia
Live From Royal Caribbean's Odyssey of the Seas: Why You'll Never Be Bored on This Cruise Ship
Emerald Cruises Officially Launches in Australia
Ambassador Cruise Line Sees Potential Expansion Into International Cruises
NCL Reveals More Dining, Design Details on New Cruise Ships Norwegian Prima and Norwegian Viva
Live from Grandeur of the Seas: The Beloved Lady G Cruise Ship Still Reigns
Just Back From Allure of The Seas' Maiden Galveston Sailing: Hits and Misses 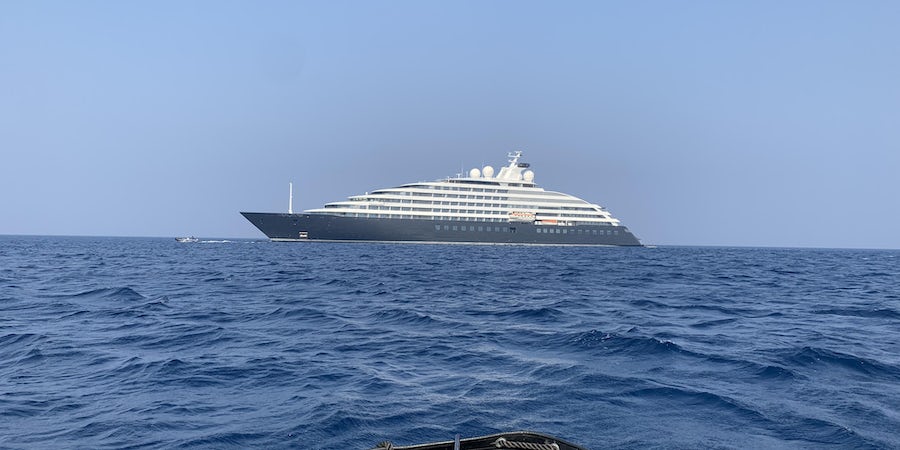 (8:55 a.m. EDT) -- While Scenic Cruises is continuing its small ocean cruise ship fleet expansion with the upcoming Scenic Eclipse II and Emerald Sakara, those will be the last in its class as the line turns to something different, the company's CEO said.

Speaking onboard a special one-off sailing in Saudi Arabia on Scenic Eclipse, Glenn Moroney said, "Eclipse II will be the last of that series, but there will be a new series that we are already engineering for.

"And same with Azzurra, Emerald Sakara will be the last of that series, and then there'll be another. We're working on interesting things. We're not finished.

"But on both sides, Scenic and Emerald Cruises, we see a lot of potential in this small ship size. I will never build anything over 300 passengers."

Emerald Azzurra will call in at Saudi Arabia for next year's season and in 2023, but neither Eclipse or Eclipse II will. "At this point in time I don't think they have the infrastructure for a Red Sea cruise, but given time, over the next five years or so, that will change.

"If we hadn't already scheduled Eclipse and Eclipse II, we would definitely be coming down for winter season too," Moroney said. "Not just for Saudi, I think cruises within Saudi itself and just Saudi ports wouldn't be enough for the international market.

Emerald Azzurra will call at the Holy Land, Suez and then Saudi Arabia as part of a longer cruise.

CruiseSaudi, a body set up in January 2021 to promote cruise tourism, has plans to eventually build five ports along Saudi Arabia's Red Sea coast, as well as redevelop Jeddah port to integrate it into the city in a bid to attract international cruise passengers.

At present, just Scenic and MSC Cruises operate out of Saud Arabia, but more lines are planning port calls as the country begins to develop its cruise market.

Moroney also revealed Eclipse II -- long delayed due to the COVID-19 pandemic and problems at the shipyard -- will have a completely redesigned top deck, with a new outdoor pool and more sundeck space. The ship is slated to launch in April 2023.

When Eclipse debuted in 2019, it had an indoor-outdoor pool in the Yacht Club at the aft of Deck 5, which Moroney admitted: "didn't work. People didn't want to be swimming inside of what they saw as a dining venue."

He explained the emergency wheelhouse, currently on Deck 10 on Scenic Eclipse, will be moved to the deck below and the space it occupied will be turned into a lounge bar.

The pool -- which will be the same size as the original Yacht Club pool -- will be fitted between the two hot tubs. The stairs will also be moved and additional windbreaks will be fitted, turning the space into a large sundeck, which is lacking on Eclipse.

"One area which we didn't think that much about when we were building everything else was the top deck. And then when we got onboard and we were walking around the top deck and said: "Wow, this is huge, what are we going to do with this? We need to do something special here.

"So for the next one we are taking it up a notch."