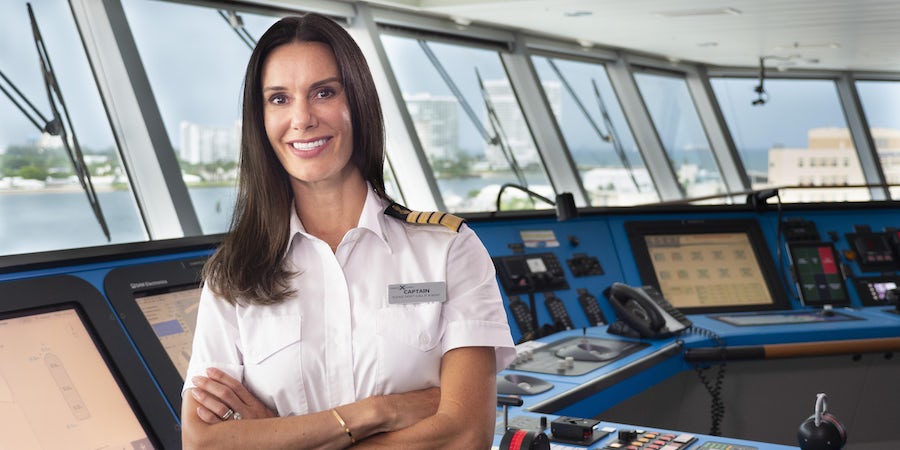 Captain Kate McCue to Helm Celebrity Beyond in 2022

(10:05 a.m. EDT) -- Celebrity Cruises' Captain Kate McCue has been appointed master of the line's newest vessel, Celebrity Beyond, when it debuts in the spring of 2022.

Celebrity Cruises President and CEO Lisa Lutoff-Perlo on Thursday appointed Captain Kate to helm of Celebrity Beyond, the third of the line's Edge Class vessels.

Captain Kate also played a major role in restarting cruise for Celebrity when Celebrity Edge, under her command, became the first major cruise ship to resume service from a U.S. homeport June 26.

Cruise Critic had the opportunity earlier this year to chat with Captain Kate about her career at sea, and what that restart was like.

A family cruise taken at the age of 12 convinced McCue that she wanted to go to sea -- first envisioning herself as a cruise director. Her father supported the idea, but told young Kate she could be anything she wanted -- including the captain of the ship.

"This is a day that I've been waiting for since we made the first cut of steel on our beautiful Celebrity Beyond. Captain Kate has transcended what it means to be a captain as a voice and example of inclusivity, diversity, and change," Lutoff-Perlo said. “She constantly thinks about how she can go above and beyond, mirroring the exceptional design and imagination of the ship she will captain. I'm beyond excited to see her take our guests to locations that will open their eyes to the beauty of the world around them and experience travel on a new-luxury ship without comparison."

McCue has also become something of an online celebrity. She has nearly 3.5 million followers across her social media channels, offering viewers a look at what it means to be a captain and what goes on behind the scenes for seafarers.

"To be the 'take out' captain for a new vessel is an honor for any captain, and it is an absolute dream come true for me," McCue said in a statement. "I always say that if you see it, you can be it, and I hope that Celebrity Beyond sails as an inspiration for all to see past convention in pursuit of any goal in life. I'm forever grateful to Lisa for entrusting this labor of love to me to captain. The thoughtfulness and imagination she put into this ship is only matched by her forward thinking to move the industry beyond what it is now and see what it should be."

When Celebrity Beyond departs on its maiden voyage April 27 from Southampton, England, it will become the largest vessel in the Celebrity Cruises fleet. The ship's first sailing will be a 10-night Western European voyage sailing to Spain, Portugal and the Canary Islands.