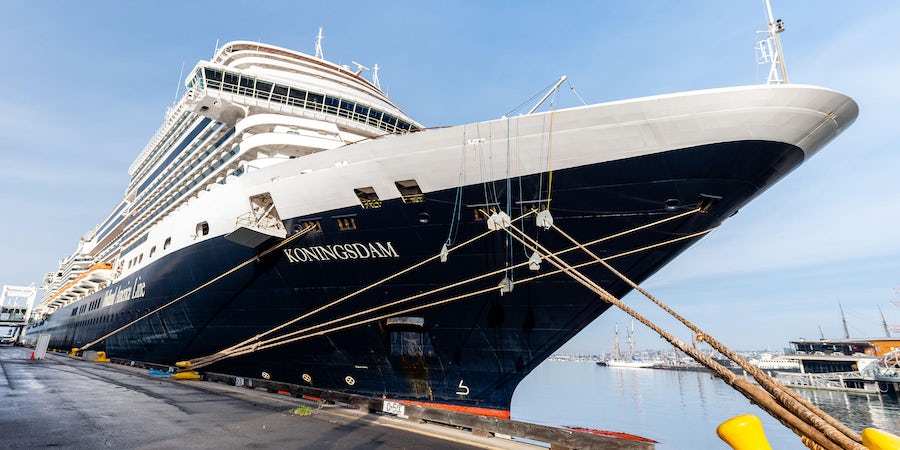 (1:17 p.m. EDT) -- On Sunday, October 10, Holland America Line will officially restart its third vessel since the start of the global health pandemic, with Koningsdam setting sail for the first time in 19 months with paying passengers.

Holland America Line president Gus Antorcha sat down with Cruise Critic this week to discuss the importance of the line's return to San Diego, its fleet restart, and the line's forthcoming new ship, Rotterdam, which will officially be christened on a special five-night voyage from Fort Lauderdale on November 5, 2021.

The Importance of San Diego

"For Holland America in particular, over 60 percent of our fleet will be back by end of year. We will have six of 11 ships in operation. Every market receives us so well and so warmly. People are excited. The teams are excited. It's really great to see and be a part of."

San Diego has been a port of historic importance for Holland America, which has in the past used the Southern California city as a base for its vessels destined for the winter cruising destinations of the Mexican Riviera and Hawaii, in particular. But San Diego is also a homeport of note for the line's Pacific Coastal sailings, Panama Canal voyages, and South Pacific crossings.

Holland America has traditionally operated full seasons of voyages to the Mexican Riviera, and is one of the largest players in the region. Traditional sailings include stops in Puerto Vallarta, Mazatlan and Cabo San Lucas, but the line has also, in the past, explored further south to Acapulco and north, to the Sea of Cortez, for excursions to the famed Copper Canyon.

"I have to say Mexico has been extremely cooperative and excited to receive us," Antorcha said. "Even before passenger operations were back, we had been making technical calls in Mexico with our shipboard teams for quite a while, and they've been incredibly supportive of us."

That level of support extends to San Diego, which has warmly welcomed Holland America Line back.

"The media has been very receptive, I think," said Antorcha. "We've gotten good coverage, which means there's interest, there's curiosity, and there's excitement for our return."

"This is my second time in San Diego in just the last few months, and I have to say, people are excited," Antorcha said, speaking from onboard Koningsdam alongside in the port.

Koningsdam is the third ship in the Holland America Line fleet to resume operations. For Antorcha, that measured approach to restart has helped the line fine-tune its health and safety protocols, one vessel at a time.

"We are focused on restarting, but restarting in a way where the health and safety of our teams, our crews, our guests, and the places we visit is of utmost importance," Antorcha told Cruise Critic. "And so, we've learned. We've adapted in coordination and cooperation with CDC and local health officials.

"So, we went to requiring a test for COVID-19 two days before (embarkation) as opposed to three. We've added a level of required mask wearing on board. And that's in response to the recent spike in Delta but that's coming down now, so we'll see.

"We will always operate in compliance, obviously."

Antorcha vocalized what many cruisers have long suspected: that cruising is among the safest forms of vacation travellers can take, thanks to mandatory testing and vaccination requirements, coupled with mask usage and physical distancing onboard.

"We feel we are providing one of the safest vacation alternatives for our guests," Antorcha said. "Certainly, when you compare it to flying somewhere and staying in a hotel. Or going out to a theme park and doing those things that we all want to get back to doing."

Antorcha noted that while demand is down slightly due to the rise in the Delta variant of COVID-19, bookings for some destinations remain incredibly strong.

"You can try and book a Hawaii or Tahiti cruise in the next few months," Antorcha said. "It's effectively sold out."

The demand for travel, and cruises, only increases for next year, and in subsequent years, notes Antorcha.

"If you look at further out, you see real interest in wanting to travel. If you look further out into '22, into '23, that product is behaving like we'd expect.

"If you look at how the consumer has reacted, it's very, very logical," continued Antorcha. "I've been talking to our hotel and airline partners and people are doing exactly what you think they would do. People still want to travel."

For those wanting to travel, Holland America Line is introducing a brand-new vessel this fall. Rotterdam makes its U.S. debut this November, becoming the line's newest flagship and the seventh vessel to bear the name.

With capacity for 2,668 passengers, Rotterdam takes over from the previous 1997-built Rotterdam VI, which was sold to Fred. Olsen Cruises in the summer of 2020.

Rotterdam VII -- itself larger and more modern than its predecessor -- will be packed with features appealing to new cruisers and Holland America's loyal Mariner past passengers. But like the rest of the Holland America fleet, Rotterdam VII will offer much of what has made the line so popular in the past: the feeling of warmth onboard, coupled with the line's gracious service.

"A lot of it has to do with our crew and the manner in which we deliver service," said Antorcha of what makes Holland America different. "It also has a bit to do of how we've outfitted the ship. It is very, very elegant.

"But it's not kind of that cold, modern elegance. It's a warm, rich, very sophisticated architecture and interior design. We've really been able to strike a balance where the environment is very rich, but at the same time, not over the top in any way."

As Koningsdam prepares to restart operations in San Diego and the launch of Rotterdam is just weeks away, Holland America is preparing to restart its global fleet.

Ships will continue to debut throughout the remainder of the year and into 2022, concluding next May with Volendam and Zaandam.

Itineraries on Koningsdam out of San Diego this fall and winter are now open for booking.