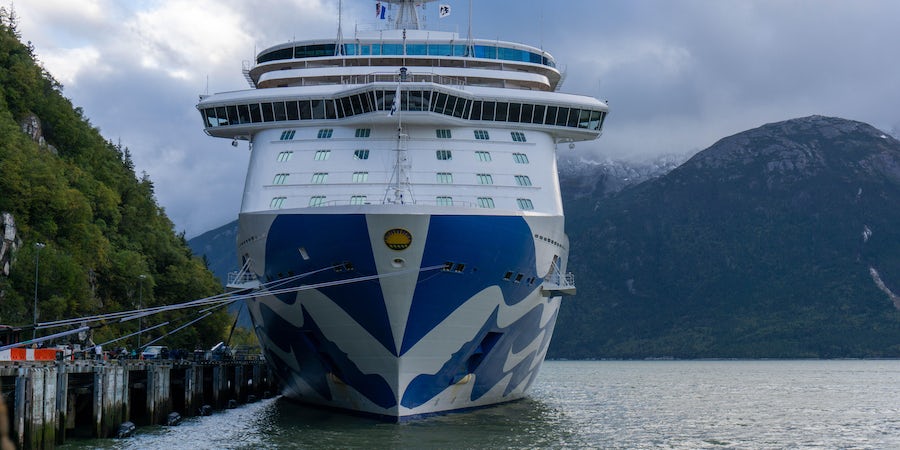 Just Back from a Majestic Princess Cruise to Alaska: Hits and Misses

(4 p.m. EDT) -- There's a certain amount of normalcy, even in these COVID-times, in seeing a familiar sight.

For me, that's been the presence of Princess Cruises' Majestic Princess in port in Alaska. Originally launched for the Chinese cruise market out of Shanghai, then shuttled to Australia and New Zealand, Majestic Princess seems to be the ideal ship to carry on Princess's tradition of sailing to the Last Frontier -- something the line has done every year since 1969 until the pandemic struck in 2020.

Seeing the Princess Sea Witch logo high atop the ship's funnel -- visible from everywhere in town in any of the three ports we called on during our week-long cruise last week – was downright reassuring. A staple of the "before times," it's now a sign that cruising to Alaska has not only come back, it's thrived during the short season.

Our late-season voyage from Seattle's Smith Cove Pier 91 cruise terminal took the classic Alaska itinerary, stopping in Juneau, Skagway and Ketchikan, with a day of scenic cruising in Glacier Bay National Park. The trip showed us that COVID-19 has not dampened Princess's ability to deliver a great cruise one bit.

After a full week onboard Majestic Princess in Alaska, here's our take:

It's Princess in Alaska: Princess has been sailing to Alaska for decades, and while Majestic Princess is a newcomer to the region, that Princess charm still stands out in The Last Frontier. Port times are fantastic, and the itinerary, while on the more traditional side of things -- don't expect to find newer ports like Icy Strait on the schedule -- hits all the classic Southeast Alaska hotspots that new and repeat cruisers will expect.

Specialty Dining Venues: Food at the ship's three extra-charge specialty dining venues was, as expected, superb. The Chinese-themed Harmony was so good we indulged twice, while the French-inspired Bistro Sel de Mer was marred only by its busy location atop the Piazza atrium that makes for a somewhat noisy dining experience. The massive panoramic windows and exceptional service, however -- not to mention the gastronomic dining experience -- makes it all worthwhile. For a classy evening, try the clubby Crown Grill -- and don't miss the locally-sourced Alaskan seafood offerings on the menu.

Hollywood Pool Club. I found Majestic Princess surprisingly well-suited to Alaska's temperamental weather, thanks to the addition of this indoor venue all the way forward on Deck 17. We were graced with liquid sunshine for nearly the entire week, yet there was always a warm, cozy, windowed spot from which to enjoy the passing scenery that included some magnificent vistas and even some remarkable wildlife sightings.

MedallionClass: After some shaky previous cruises where the line's digital OceanMedallion technology has either failed to work or worked only intermittently, Princess has finally hit a home run with its MedallionClass technology aboard Majestic Princess (for the most part; see below).

Orders for room service and drinks throughout the ship were delivered timely and correctly; the Medallion correctly unlocked my stateroom door for me each and every time; and never needed reprogramming once. The wearable RFID medallions that take the place of the old-fashioned keycards do double-duty in these COVID-19 times, acting as a contact tracing safeguard for passengers and crew. It took a few years, but consider me a convert to the MedallionClass way of cruising.

Complimentary Movies: Not everyone takes a cruise to watch movies, but it sure is nice to have a full lineup of complimentary movies and television shows (not to mention ample seasons of "The Love Boat") to cozy up to in the evening in the privacy of your cabin. Every other line I've sailed with this year has charged handsomely for that privilege; kudos to Princess for providing it gratis.

The MedallionClass App: Though Princess Cruises has come a long way with improving the functionality of its MedallionClass technology onboard ship, the app itself is still a bloated piece of software that sometimes works, and sometimes doesn't. While restaurant reservations were easy to make and change once onboard, the App told us friends we sailed with back in 2019 on Caribbean Princess were onboard (they weren't), and insisted I hadn't even embarked the vessel until well after we sailed from Seattle. We also found it strange that the OceanMedallion app doesn't allow you to purchase drink packages pre-cruise; to do that, you'll have to log in on the actual Princess Cruises website and do it "old school" through the Cruise Personalizer.

Main Dining Room Food: Unlike the ship's extra-charge specialty restaurants, the food in the main dining rooms was lacking. It's not bad, it's just not particularly memorable. Muddling the issue is that the food in other complimentary venues -- like Alfredo's, the International Café, and the poolside Noodle Bar -- was top-notch the entire voyage.

While Majestic Princess is finishing up its last cruise to Alaska this year, the ship will be back in 2022 for a season of north and southbound cruises that operate from May to September between Vancouver and Whittier. Until then, it's sailing the Mexican Riviera and California Coast.

Those seeking something different should keep an eye out for the ship's September 10, 2022 voyage: a 10-day Inside Passage cruise sailing roundtrip from Vancouver, with calls on Ketchikan, Juneau, Skagway, Icy Strait Point, and scenic cruising in Glacier Bay National Park and Hubbard Glacier.