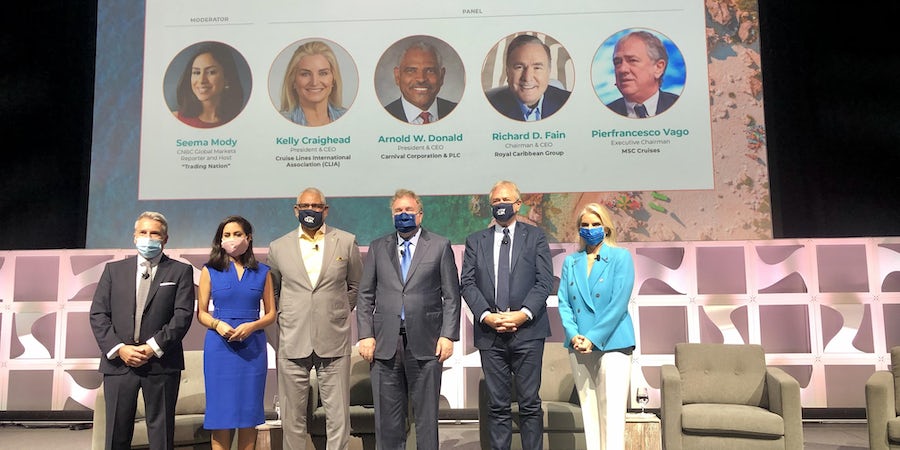 (1 p.m. EDT) -- The cruise industry is meeting in Miami for the first time in more than two years at the annual Seatrade Cruise Global conference.

The last Seatrade Cruise Global -- the biggest cruise industry conference in the world -- took place in March 2019, after last year's was cancelled due to the COVID-19 pandemic.

And while COVID-19 was top-of-mind for attendees, cruise line executives speaking at the Miami Beach Convention Center praised the resilience of the industry and the path forward as cruise lines across the globe continue their staggered resumption of service.

The State of the Industry Address -- attended by cruise industry patrons and watchers, with social distancing and mandatory masking requirements -- reflected the difficulties posed by the last year and a half, while continuing to look forward to the future.

"The past 19 months have been the most extraordinary period our industry has ever faced," Kelly Craighead president and CEO of Cruise Lines International Association (CLIA) told audience members. "I don't think any of us could have imagined at the outset of the pandemic just how profound its impact would be."

A Brighter Future, Shaped by Science

From the emergence of new cruise lines to overwhelmingly positive passenger satisfaction rates for restarted cruises, executives had plenty to be optimistic about while at the same time noting recovery does not come overnight.

"Our Carnival brand is sailing with 11 ships. Our European brands have been sailing longer. We're coming back, and it's exciting. Bookings are all strong, the protocols are working. And that's the most important thing. Compliance and environment protection and the health and safety of everyone."

Mandatory vaccinations for eligible cruisers play into those health and safety protocols as well.

Asked about the emergence of several new cruise lines -- like Virgin Voyages -- during the pandemic interim period, both Donald and Royal Caribbean chairman and CEO Richard Fain stated there were more than enough passengers to go around.

"Having Virgin come in…all of that adds to the impact that the cruise industry has," Fain said. "They are adding more demand than they are supply. I welcome them. If we get new ideas and new thoughts, that's positive too."

Asked what advice he would give Virgin head Sir Richard Branson, Carnival's Donald was succinct.

"Listen to your prospective guests. Listen to the travel agent professionals that you're working with. Your guests will tell you what they want and what they need."

Cruise executives have also been buoyed by the revelation that new-to-cruise passengers, not just experienced past guests, are setting sail on these early return-to-service cruises.

"People who cruise a lot, they are comfortable," said Carnival's Donald.  "People who haven't cruised, they have reasons they haven't cruised before. We are seeing first time cruisers even now on the ships. The most powerful marketing tool we have is word of mouth."

"What we all assumed was that when we started back, it would be our repeat customers" returning to sail, said Fain. "That hasn't happened. We are getting first-timers, and I think the reason is we are getting the message out on the protocols, and number two, the innovation."

"All of us are pushing the envelope. And our guest satisfaction is amazing. "

Getting Along to Get Along

Asked about their opinions of controversial Florida state governor Ron DeSantis -- whose controversial legislation banned ships for asking for proof of vaccination -- executives refrained from making personal comments and instead focused the discussion on the need to work with a variety of governments, health authorities and politicians in ports and destinations worldwide.

Still, mention of DeSantis' name drew a moment of strained levity when a single enthusiastic round of applause was given at the mention of the Governor's name.

"Governor DeSantis is a strong supporter of the cruise industry," CLIA's Craighead said in response. "We are open to all ideas."

Royal Caribbean's Fain pointed out that negotiations have had to occur with governments on a global scale, and not just within the United States.

"We have had to deal with governments all over the world," Fain said. "It was very important we established common goals, common processes. What we're doing now in our industry, other industries are saying, 'that's the kind of way we want to be operating.'"

"We're science-based," Donald told the crowd.  "It's important for all of you out there to keep the conversation going…We're still constrained in a lot of ways. There are still destinations with extreme restrictions. We have to keep the communication pressure up."

Fostering an environment of cooperation was a theme repeated by the executive panel throughout.

"I can certainly never speak on behalf of the CDC, but our leaders are 100 percent committed to following stringent and robust protocols" Craighead said. " We're certainly on a path, I think, to continue to follow these enhanced protocols."

The U.S. Centers for Disease Control and Prevention (CDC)'s Conditional Sail Order is currently set to expire on November 1, 2021. The organization recently revised its guidance to state all passengers should undergo COVID-19 testing at the pier no less than two days prior to embarkation.

That, in turn has prompted other lines to come up with alternative plans, including pierside testing for people who cannot get tested in time.

Asked what would happen when the Conditional Sail Order expires, Craighead declined to speculate.

"I can certainly never speak on behalf of the CDC, but our leaders are 100 percent committed to following stringent and robust protocols," Craighead said.  "We're certainly on a path, I think, to continue to follow these enhanced protocols."

Noteworthy this year were the lines that chose not to attend Seatrade Cruise Global, in part due to the ongoing operational restart of the cruise industry and the rise of COVID-19 cases in Florida.

The Miami Beach Convention Center, where Seatrade Global is being held, has no vaccination mandate.

Other lines electing to not attend this year include Carnival, Holland America Line, Seabourn, Princess, Celebrity and Disney Cruise Line. All tell Cruise Critic the decision to skip the conference was to allow the focus on operational restarts of ships around the world to continue uninterrupted.

But for Carnival Corporation's Donald, the overriding theme that will shape the future is to keep the conversation going about the importance of cruise.

"We have to continue to champion the industry," he said.