You may also like
Dismiss
Marella Cruises Revamps Kids Club, Rebrands as M Crew
Marella Cruises Details New Protocols for Resumption of Cruising
Testing Cruise Ships' COVID-19 Health Protocols: Costa vs. MSC
Just Back From Quantum of the Seas in Singapore: COVID Changes That Worked -- And Those That Didn't
Which Cruise Lines Are Sailing Right Now in the UK?
Live from Marella Explorer: Aboard Marella Cruises First Sailing in 15 Months
Marella Cruises Announces International Restart in September
Live From Norwegian Jade: What It's Like On The First NCL Cruise Back in 16 Months
Just Back From Crystal Serenity: Changing Cruise Protocols, Unchanging Cruise Luxury
Live From Seabourn Ovation: What Does A Luxury Cruise Feel Like Right Now? 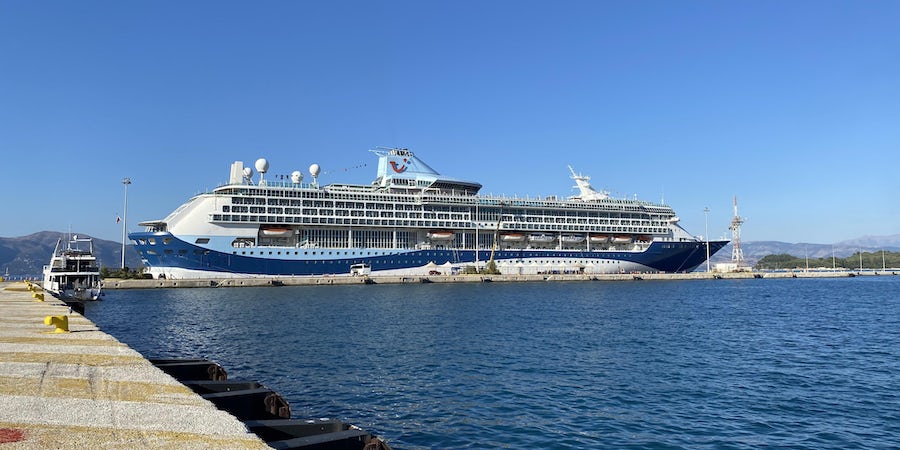 Live From Marella Discovery in the Aegean: What It's Like Onboard One of the First UK Cruise Ships Sailing Internationally

(11:15 a.m. BST) -- When Marella Cruises returned to international sailing, Marella Discovery set off around the Greek islands on September 3, 2021 with 600 Brits on board.

I'm on the ship's fourth Greek cruise with around 900 passengers -- British residents-only -- as it tests the waters with Covid-19 protocols.

We're sailing from Corfu to Crete, Rhodes and Mykonos with two mainland calls, for Athens and Olympia, so it's a single-country cruise.

A number of cruise lines have been successfully operating in Greece over the summer, but this is the first line catering exclusively for British passengers to restart in Greece.

Here's what it's like onboard Marella Discovery in the Greek islands.

Unlike UK cruises, though, we had to pay for a pre-flight antigen test, another to take two days before returning, and a CPR test for two days after getting home, which cost £125.

Unfortunately my Tui-approved provider, Klarity, didn’t get the result back to me and several other passengers before the 6.40am Gatwick flight, but I had an NHS test with me that was accepted at check-in, and more tests were available at the airport.

It was stressful but after that everything went smoothly. The 20-minute transfer delivered us to the docks where Marella staff inspected boarding passes, passports, proof of double vaccination and Passenger Locator Forms to allow us into Greece.

We took another antigen test and in 10 minutes we were on board. Our cabin cards were in a wallet on the door handle, reducing the number of people touching them.

Marella Discovery has around half of its normal 1,900 passengers but this should rise to 85 per cent in December, when the ship will be in the Caribbean.

We must wear masks except in our cabins, on deck or eating and drinking and this is strictly enforced because it's EU law. If you don’t have a mask while you’re wandering through the buffet they'll get you one.

Another EU rule is daily temperature checks or our cabin cards will be suspended. It's super-simple. Thermal screening stations can be used up to 4pm. Just scan your cabin card and put your head near the screen. Medical staff are automatically alerted if you’re over 38C and they retake your temperature and provide antigen tests. So far, says Hotel Director Danielle Rowley, nobody has failed.

So the big difference to cruises abroad rather than around the UK is the paid-for COVID tests and Marella Cruises is aware of the confusion.

"A lateral flow test is required to board the ship but may be checked at your UK departure airport,” said a spokesman. "We do have measures to ensure all customers are able to continue their holiday as planned. If a customer can show a negative test and are waiting for the certificate, they can continue."

Chris Hackney, Managing Director of Cruise TUI UK & Ireland, said the company was thrilled to be sailing in international waters but adds: "Implementing rigorous and robust COVID protocols has been an absolute priority to ensure the safety of guests and crew, and to enable the return of international cruising."

Hand spray is everywhere and a crew member makes sure you apply it before entering any restaurant.

You can't serve yourself, currently standard practice on all cruise lines, and you have to sit at a table for waiter service.

The exception is Deck 9's Pool Bar with its Grab & Go queue area, and you can pick up a ready-poured drink from a bar trolley -- there's no charge on the all-inclusive Marella Cruises.

To maintain social distancing you can only eat with your travel party and if there are more than six in your group -- or more than two households -- you have to split up.

Lifts are limited to four people or one travel party and some seats in bars and lounges have Keep Me Free notices, as does the theatre, where you are shown to a seat.

The open-air pool is limited to 22 people and another under glass takes 20. For hot tubs it’s two people or four from the same travel group. Similarly, the gym is limited to 18, with one-hour booking slots.

All cruise lines with UK passengers have to comply with UK Government and EU Healthy Gateways guidance but in Greece there have never been restrictions on going ashore without a ship's excursion.

These – and things like the gym or speciality restaurants – can be reserved on the ship’s app, Navigate, to reduce queuing.

You even watch the safety briefing on the app, then visit the muster station to have your cabin card scanned.

Claudia and Jonathon Brunyee from Leeds are on their first cruise because they couldn’t holiday in America as planned.

"Wearing masks is a pain but it’s necessary," says Jonathon. "If people aren't wearing a mask the staff are very polite about reminding them. Ninety-nine per cent of the passengers seem to be adhering to it."

Claudia would have liked clearer instructions on whether tests had to be taken at different ports – we have to take a mid-cruise test before leaving the ship at Mykonos -- but she says: "Everything else has been fairly easy."

Susan and Geoff Brittain, from near Aberystwyth, booked a Grand Suite so they had plenty of space should they catch Covid but have been kept awake because more entertainment is being held on the open deck above them.

"I understand why they're doing it. It's just not good for us," says Geoff. "They’re sticking to their protocols and being very strict."

Says Susan: "They’re doing everything they can with regards to cleanliness and hygiene."

The couple flew from Manchester and many passengers commented on not being asked to show antigen test certificates generated from the £25 pre-flight test, which they regard as "money wasted".

Not that it's put them off and like most passengers they're pleased to be back on a ship -- despite certain beers being unavailable. As are the crew.

We’re in Mykonos now, half way through the cruise, with memories of airport stress fading fast. I can’t fault the efficiency and friendliness of the crew.

It's a happy ship and the bands on board are particularly good. But I'm pleased there will be a video to help us take our second paid-for antigen test and I think the cruise line is doing its best to comply with confusing international travel rules.

It's a steep learning curve and, like all the passengers, I’m just pleased to be on it too.