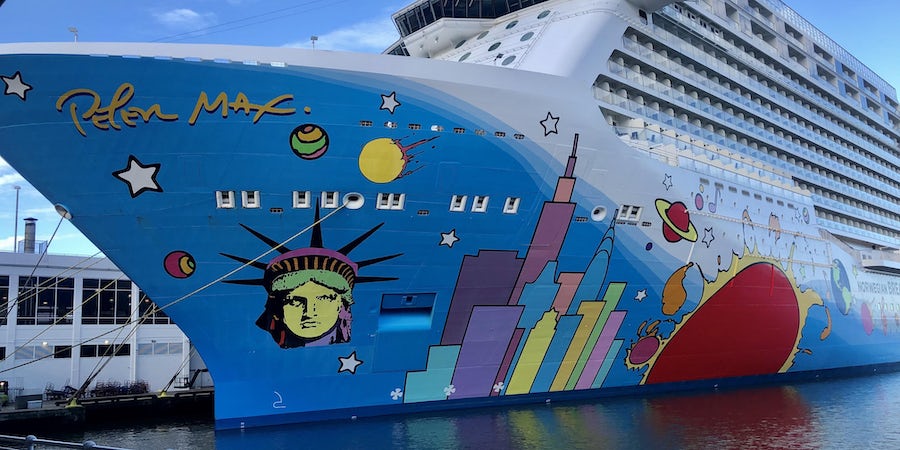 (11:33 a.m. EDT) -- The return to service milestones continue to pile up, as more cruise ships return into service in different ports around the U.S.

Beginning September 26, Norwegian Breakaway comes back to the Manhattan Terminal in New York City for its fall season of cruises to Bermuda. While Oasis of the Seas has been sailing out of Bayonne across the river for a month and other cruise ships have pulled into New York, Norwegian Breakaway is the first mainstream ship to return with an NYC homeport.

To mark the occasion, Cruise Critic caught up with Norwegian Cruise Line President Harry Sommer who spoke about getting ships back in the water, Norwegian's vaccine requirements -- and when we can expect things to get back to normal.

Cruise Critic: You must be pretty excited about Breakaway coming back to New York. That must mean something, on a symbolic level.

Harry Sommer: You know, it, it really does. New York is our second home. We have a big emphasis up there and it was critical for us when we restarted that we tried to pick the places that we move lots of customers from, because, we want to give guests confidence that cruising is back.

We started first in Europe because they were a little bit ahead of the U.S. and approving things out of Athens and Rome and then Barcelona. So three ships running there, and now we have three ships running in the U.S. -- Miami, Seattle and New York. We are the first cruise line to be operating from New York City. And also the first major cruise line to be sending inbound tourisms to Bermuda -- there were a few people doing around-Bermuda cruises, but we're the first cruise line that's going to be visiting there as a port of call. So we're excited to be on the forefront, at least in this market.

CC: I wanted to ask you a little bit about how the different markets are doing. Norwegian Encore seems to have been doing well in Alaska.

Harry Sommer: Of the six ships now, that's probably been the one that's gotten the most interest because, let's face it, it's still a little complicated for Americans to travel to Europe and Americans are -- by far -- the largest source market to come back to cruising. You know, they're a little bit ahead again of Europe on that. It's also a shorter season. I think people realize that if they want to go, they gotta go, where some of these other markets opening up now, we sail all winter long.

We set an internal goal that we want to be about half full for this introductory season. And all of our ships have been operating somewhere between 50 and 60 percent on a fairly regular basis. Even with Breakaway, we opened up some of these cruises fairly close in -- and we still got them to about 50 percent. We're going to be running Breakaway this weekend with about 2,000 guests, which is just at half capacity.

CC: I wanted to specifically ask about Europe. Is there still reluctance for Americans to go over there?

Harry Sommer: It's not so much reluctance, but guests are a little concerned that rules change over time. And any time there's concern that leads to hesitation, which leads to a slowdown in bookings. If we were trying to get 100 percent full, Europe would be a challenging market to do that. But since our goal is only to be in that 50 to 60 percent range, we pretty much have every cruise this year at that. So it's OK with us.

CC: I have been reading that winter Caribbean is a little soft. Are you seeing that too?

Harry Sommer: The Caribbean is a little soft. When you listen to the cruising population, they're smart people. The cruising population is much more highly vaccinated than the general population -- when we go out to our past guests, 93 percent are already fully vaccinated, which is well above the country average. They closely follow what's happening in the world. And when we saw, COVID cases starting to go up in mid-July, we did see a decrease in bookings.

And that's okay. We're in no rush. Our main goal now is to get our ships up and running. We put one ship in the water every two to three weeks. We hope to have all the ships in the water by the end of 2022 Q1. We're happy to have reduced occupancies so that we can provide an excellent product, with social distance, no crowding, no lines anywhere. It's working great. And making sure that if we do get the occasional COVID case, that we have all of our internal protocols in order, and we show that there's never any spread. Gradual improvements is all that we want.

CC: Because Norwegian came out so early with your 100 percent vaccination requirement, do you think that benefitted you in the long run because you didn't have to go back and forth with your protocols?

Harry Sommer: When we first announced it at the very beginning of April, that was considered an extreme position back then. Now, everyone's doing that. We have a history now of being at the forefront. Having this certainty and not changing our position has made it a little bit easier with our past guests, the traveling community, the trade community because they don't have to guess every other week that the requirements are going to change. We have one set of requirements -- they've been the same since April and they apply to every ship.

Quite honestly, I gave up trying to understand what the other cruise lines are doing because it was as complicated for me as anyone else, and I'm in the industry. I just know what we're doing, and what we're doing is working.

(Another milestone will come) when the 5- to 12-year-olds can be vaccinated. All indications are that by around Halloween, early November that will happen. So we're encouraged that maybe in December, certainly by Christmas, the younger ones can come on.

CC: That's a good point because the family market, it's been difficult for them. If the vaccine for younger kids is approved in Q4 in the U.S., what kind of impact will that have for you?

Harry Sommer: There will still be enough time that parents will be able to book their winter vacations with us. The timing works out perfect for Christmas and New Year, but even if people miss that window, because they're not right there at the front of the line -- you have Spring Break, Presidents' Day, weeks in March. Those are great opportunities for people to bring families on board.

CC: What does the fact that people from Britain and Europe are now able to come to the U.S. mean for you?

Harry Sommer: The announcement was perfect timing because this is about when the Brits and Germans and Spaniards and other Europeans would start booking Caribbean cruises. The day the announcement was made, that afternoon we started to see an uptick in bookings.

In the past 30 to 40 days, we've seen a huge swing in bookings because Europe started to open to other Europeans back in late July and early August. So they were able to book cruises on Norwegian Jade and Norwegian Epic. So I would say for the first time since last March, our international share of business is actually back to where it was before, despite the fact that Australians and Asians still don't have clarity to book. Even without with those markets, the Europeans and South American markets now started to over-perform. So our international share is back to where it was.

By Q1 2022, we'll be in a good place. I think it will be Q2 or Q3 until we get back to what is really normal in terms of all ships in operation around the world and at full occupancy. Every day, every week should be a little better than the week before.