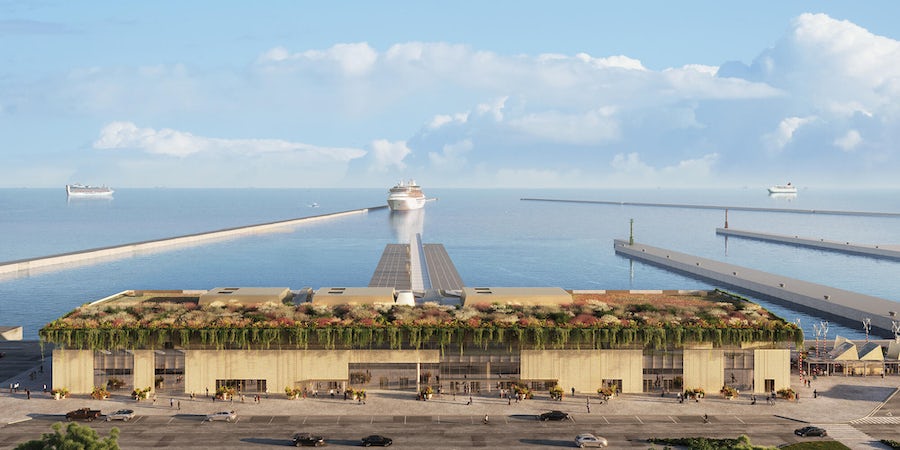 (10:30 a.m.) -- Royal Caribbean Group has been awarded a contract to construct and operate an innovative new sustainability-focused cruise terminal for Ravenna, Italy, about 88 miles south of Venice.

The $39.4 million terminal is expected to open in spring 2024, as an alternative port to Venice.

Pre-pandemic, Royal Caribbean International had announced it would move its Rhapsody of the Seas from Venice to Ravenna. Since then, Venetians have continued efforts to ban ships from the city’s Lagoon – an effort that received a considerable boost when the Italian government agreed this summer to ban ships from the waterway.

Royal Caribbean Group will also be the concessionaire for cruise operations at Porto Corsini, which will have berthing facilities for two ships at a time.

"The fact that an international cruise operator of such worldwide importance as Royal Caribbean Group, has decided to invest in our port is an important signal for the entire Ravenna area," said Daniele Rossi, president of the Ravenna Port Authority.

Royal Caribbean Group officials said the project represents a commitment to expand options for cruise travelers in the Adriatic region and throughout the Mediterranean, in anticipation of a strong post-pandemic rebound and growth opportunities in the region.

"We are so honored to partner with the Ravenna Port Authority on this exciting cutting-edge project which will return growth to Ravenna and bring a new era of cruising to the region," said Joshua Carroll, vice president, Destination Development for Royal Caribbean Group. "There is a wealth of opportunities for visitors to discover the rich historic and cultural treasures, art and antiquities, the thrill of motor racing, unspoiled nature and beaches, international nightlife and Italian culinary tradition."

The focus is on the quaint seaside town of Ravenna as a world-class homeport, not just a port of call, officials said. When fully operational, the new facility is expected to handle more than 300,000 guests per year, beginning or ending their cruises in Ravenna. Nearly international airports include Forli, about 18 miles from Ravenna and Bologna, about 50 miles from the town.

The two-floor terminal will have a crew center, tourist information desk and spaces for local street food, with the building connected to ships via an elevated walkway running along the length of the pier.

Port authority officials said the project is being designed to enhance the Ravenna waterfront and complement a coastal project called Park of Dunes, with public green spaces, pedestrian and cycling paths and entertainment areas for locals and visitors.

Green aspects of the terminal project include a focus on water and energy efficiency, renewable energy production, recycling waste management and sustainable sourcing of materials, officials said. Shore power will be available to enable ships to be able to turn off their engines. To support these efforts. To support these efforts, the port authority has obtained more than $35 million in funding from the Italian government.

When there are no ships in town, the new terminal will be a centerpiece for local gatherings and events such as sport competitions and artistic and literary presentations, officials said. The ground floor space will also be used for trade fairs and other large gatherings.