You may also like
Dismiss
Norwegian, Royal Caribbean Team Up To Create Cruise Health and Safety Protocols
Cruising the Newest Ship Afloat: Live From Celebrity Apex
Live From Royal Caribbean's Odyssey of the Seas: Why You'll Never Be Bored on This Cruise Ship
"Cruising With…" Set to Return Next Year -- But Without Jane McDonald
Disney Wish To Feature New Onboard Entertainment Firsts from Disney Cruise Line
Royal Caribbean Unveils New Entertainment Line Up on World's Biggest Ship, Wonder of the Seas
NCL Reveals More Dining, Design Details on New Cruise Ships Norwegian Prima and Norwegian Viva
These Ships Are Coming Back To The U.S. in 2022: Here’s Why You Should Care
A 'Thor: Love and Thunder' Cameo That Gets Cruise Fans Excited
Just Back From Allure of The Seas' Maiden Galveston Sailing: Hits and Misses 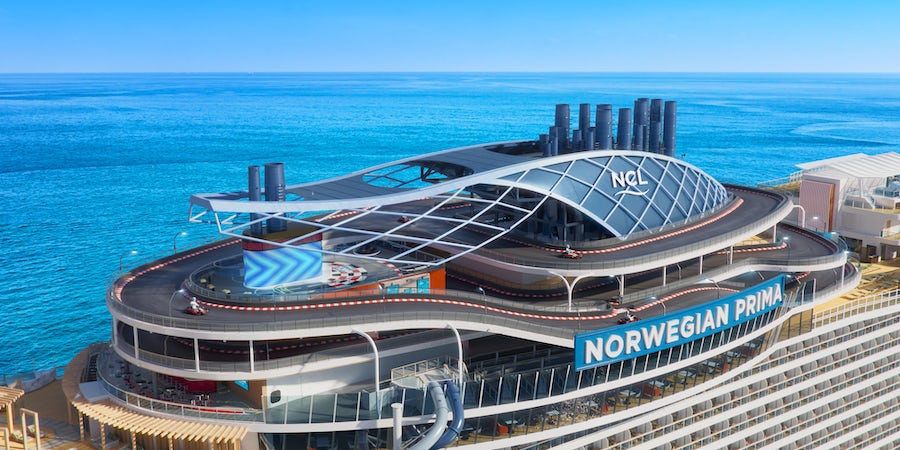 With Racetrack, Slides and More, New Norwegian Prima Cruise Ship to Homeport in Galveston for 2023-2024 Season

(11:15 a.m.) -- Norwegian Cruise Line is starting to reveal details about its next ship, the 3,215-passenger Norwegian Prima – and there's a lot to unpack.

The line had been mum on whether or not the ship, debuting in August 2022, would have a racetrack, as on the larger Norwegian Bliss, Norwegian Joy and Norwegian Encore. The answer is yes, and the Prima Speedway will be on three levels, and 1,378 feet – making it 22 percent larger than the racetrack on Norwegian Encore.

The speedway will go around the funnel with 14 exciting turns, and 15 drives can simultaneous race reaching speeds of up to 30 mph.

The line also announced the ship will be based in Galveston for the winter 2023-2024 season. The first of a new six-ship class of 142,000 ships, Norwegian Prima will sail in Europe and from other U.S. ports before its Texas season.

New shows in a cool theater

Norwegian also announced a bevy of new features. For the first time in the fleet, the theater on Norwegian Prima will be on three levels and able to uniquely transform from a venue for Broadway-style shows into a Vegas-style nightclub and a venue for live game show productions with elaborate sets.

The marquee show on the ship will be the Tony-nominated "Summer: The Donna Summer Musical." The 75-minute musical is based on the rise of Donna Summer to be the Queen of Disco. The theater will transform into a full-scale disco and guests will have opportunity to dance to such Summer hits as "Last Dance," "Bad Girls," and "Hot Stuff."

Also headlining on the ship will be "Light Balance Universe" featuring Light Balance, a golden buzzer winner on "America’s Got Talent." The troupe’s high energy dance and aerobics will be accompanied by a "multisensory light spectacular," the line said.

The theater’s nightclub iteration will feature a dance floor and giant moving LED screen that lowers from the ceiling. The club will have a SENSORIA theme that, according to Norwegian "provides clubgoers an out-of-body experience where they can dance late into the night and enjoy a kaleidoscope of high-energy music and innovative special effects."

Norwegian worked with Fremantle Media in creating four interactive game shows where passengers will have opportunity to win grand prizes. They also take place in the Prima Theater and Nightclub, which in this case is transformed into larger-than-life production sets.

The shows include: "The Price is Right LIVE on NCL," where guests will "come on down" and participate in the pricing game – and spin the wheel for prizes. There’s also "Supermarket Sweep Live on NCL" where contestants race through full-scale grocery store aisles in a show that involves trivia questions, product knowledge and speed; "Press Your Luck LIVE on NCL," where guests answer trivia questions for a big win; and "Beat the Clock LIVE on NCL," a team competition based on luck, speed and strategy.

In addition to the adrenaline rush on the racetrack, thrill seekers may seek out The Drop, a dry, freefall slide with a 10-story plunge – creating what Norwegian is touting as "the highest G-forces of any cruise line." There’s also The Rush, with dueling dry racing slides.

The Galaxy Pavilion indoor virtual gaming complex on Norwegian Prima will have 14 attractions, including four new hyper immersive simulator experiences and two different escape rooms. There will also be a Topgolf Swing Suite with full-swing golf simulator technology – the same simulator used by PGA pros such as Tiger Woods and Jon Rahm.

Other new activities for guests on the ship include The Bull’s Eye, a twist on the classic game of darts, but with a video tracking system to automatically calculate scores – the system can also do instant game replays. Tee Time is a new Vegas-style interactive mini-golf experience with participants competing for prizes.

The Aqua Park and Main Pool area gets an energetic update as well. Norwegian Prima will feature the brands first Tidal Wave waterslide – complete with gushing surf that guests ride on innertubes.

For those who prefer milder pursuits, there will be two relaxing infinity hot tubs located under a cascading waterfall. The ship will also feature an adults-only Vibe Beach Club with dedicated bar and two infinity hot tubs.

Norwegian’s classic rock club, Syd Norman’s Pour House, will be back on Prima (the concept first debuted on Norwegian Breakaway in 2018). A house band will focus on "the greatest rock songs" from such as Aerosmith and Led Zeppelin.

Also returning is The Improv at Sea comedy club, showcasing standup performances and with a "Science of Comedy" theme.

From Galveston, the ship will do seven-day cruises to the Western Caribbean – specifically to Costa Maya and Cozumel, Mexico; Harvest Caye in Belize; and Roatan, Honduras. All visits featuring between eight and nine in-port hours, the line said. The line says the ship debuted with record-breaking sales when it was announced in May.