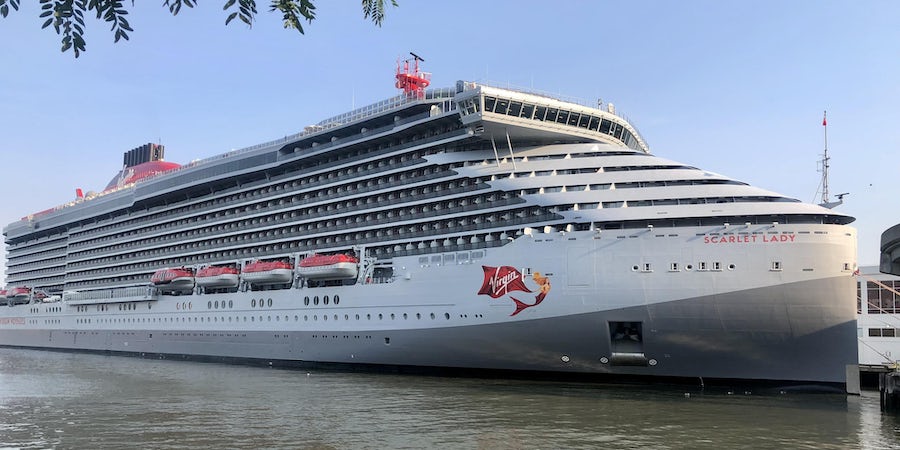 Virgin Voyages is Coming to Miami: Why We Can't Wait to Sail on This New Cruise Line

U.S. cruisers -- and really, anyone looking for a hip and safe vacation on the water -- have really been waiting for Virgin Voyages. The Richard Branson-driven cruise line debuted its first ship, the 2,750-passenger Scarlet Lady, in the U.K. on February 2020. And we all know what happened just a month later.

Scarlet Lady finally started sailing with "sailors," (passengers in Virgin Voyages parlance) in August, with a series of short cruises to nowhere in the U.K. Reviews have been pouring in, with the message that the cheeky Virgin ethos that has revolutionized everything from the music industry to airlines is alive at sea. (Read Cruise Critic UK managing editor Adam Coulter's take).

I finally had a chance to see Scarlet Lady in New York this week, where the ship is docked before it heads to its eventual homeport of Miami. New Yorkers are able to book the ship for dinner, a la Open Table, we were told, and the ship is also hosting the REVVEL music festival with Major Lazer this weekend, in conjunction with the website Thrillist.

What I found during my day tour in Manhattan was a ship with spaces that live up to its promise of something different. I'm set to sail on Scarlet Lady's October 6 debut in Miami, and am now more excited than ever about Virgin's entry into cruising. Here's why.

Can we please stop being ageist about this ship's demographic? Too many people have posited that the hip elements that make up Scarlet Lady -- the vinyl records being spun by a ship DJ, the sassy double entendres and the focus on a modern experience at sea -- are geared solely for those in their 20s and 30s.

Not true. Just take a look at the main record highlighted in the ship's roundabout (atrium) -- the seminal punk classic "Never Mind the Bollocks, Here's the Sex Pistols." The album has a sentimental reason for being there -- Branson signed the band to Virgin Records when no one else would in the 70s. Punk rock speaks as loud and proud to Gen Xers and even some Boomers as it does to those younger (the ship is selling limited edition copies of the vinyl and for $77, I'd like to buy one).

The onboard tattoo parlor Squid Ink has a similar draw. People who like, have and want tattoos will be drawn to this first-at-sea offering, regardless of age. On the ship's ex-U.K. sailings, people in their 60s were getting their first ink, according to Frank Weber, Virgin's senior vice president of hotel operations. (He himself boasts a later-in-life sleeve). Squid Ink books up quickly; I'm planning on nabbing an appointment.

Virgin is going hard for foodies, and the restaurants onboard Scarlet Lady are firmly geared toward modern tastes and trends. Instead of a buffet, there's a food hall with different specialties such as tacos, sushi bento boxes and 24-hour diner breakfast, plus grab-and-go options like you'd find in Whole Foods.

The Mexican-themed Pink Agave is focused more on dishes that you'd find in Mexico City, instead of Taco Bell, along with a killer mezcal and tequila collection. Razzle Dazzle is the first vegetarian-forward restaurant at sea. Gunbae replicates a party-hearty Korean BBQ vibe, where you grill your food at your table and play drinking games with your companions. A café serving poke bowls is near the pool. What's cool is that every restaurant not only has its own galley and chef, but also a separate bar so you can go have an apertivo at the ship's Italian restaurant Extra Virgin, and then have dinner somewhere else.

The lounges, too, each have their vibe. With a mirrored entry that's already become Instagram-famous, The Manor promises the best nightclub vibe we've seen at sea. And on a ship where neon signs remind you to "save water, drink Champagne," I know that I'll be running up a bar tab at the sophisticated Sip. (You can also use your smartphone and Virgin app to "shake for Champagne" delivery, no matter where you are on the ship -- a feature that seems almost too tempting).

Wellness is also a cornerstone of the Virgin ethos, and I'm genuinely excited about how Scarlet Lady has put fitness front and center. Unlike most cruise lines, Virgin is making all fitness classes free of charge; Chief Commercial Officer Nirmal Saverimuttu said the goal is to have some kind of shipboard fitness activity going ever hour -- be it yoga, spinning, boxing or fun 80s-throwback workout class (leg warmers included).

The running track on Scarlet Lady stands alone, high and bright-red and free of interference from lounge chairs. With the track, the line wanted to signify "that it was an active ship," Weber said. I think that people will enjoy both the fitness itself and the view of other fit people working out; it's not a coincidence that one of the weight rooms opens up onto a large jacuzzi. Very Miami Beach.

Speaking of the pools, the two onboard are decidedly geared toward dipping and drinking, not actual swimming. While much has been made about how small the pools are, I don't think it's going to matter much to this crowd, as the ship has so many cool outdoor areas to sun and hang out.

I've never seen so many different types of ship loungers, which include swings, full-out beds, Dutch-inspired hooded and numbered beach chairs known as Strandkorb, and in a nod to the yacht and catamaran lifestyle, a reinforced mesh net where you can sprawl 16 stories high. (And those aren't including the private beach cabanas or Richard's Rooftop, an enclave strictly for suite guests). I wanted to lie on them all.

This focus on relaxation extends toward embarkation and debarkation. Unlike other lines, where people queue up with suitcases at dawn and must leave their rooms by 8 a.m., the Virgin checkout isn't until the generous hour of 11 a.m. That gives you license to party the night before and sleep in, and then have brunch before you go. "I want you to leave glamorously," Savereimuttu said.

The later checkout leads to a more leisurely check in. The next set of guests begin embarkation at 2 p.m., meaning people can go directly to their cabins instead of waiting around. Sailaway isn't until 7 p.m., making it feasible that you could fly into Miami on the same day as your cruise (although we still recommend coming in the night before, just in case).

Because I took a day tour while the ship was in port, I have yet to experience Virgin at night. But I love that the ship is moving beyond Broadway-style revues; while some cruise lines, such as Norwegian, do these very well with actual Broadway shows and high-quality performances, on most cruise ships, the old song and dance seems… just that.

Drag shows, dance parties and acrobatics are exciting and fresh and -- here's that word again -- modern. The Red Room theater is designed as a multi-purpose room, where techs can create a variety of entertainment set ups, in the round or standing room only. Speaking of red, Scarlet Lady will hold a red night on each sailing; sailors are encouraged to pack something crimson.

Beyond that, though, Virgin is meant to be a "come as you are" experience. There's no formal night, no dress code. The crew have uniforms, yes, but they actually look like clothes that you'd want to wear, on a diverse and youthful bunch sporting tattoos, facial hair and a fun attitude. They're chatty too; I found myself telling more than one crew member that I was looking forward to seeing them in a few weeks.

All in all, what we're really digging is the ship's overall vibe and how it mimics the things that we love in our daily life. The Virgin Voyage experience promises to be hip, but accessible; modern, but not alienating. If you're someone who spends any time at all going out in a city, regardless of age -- you'll get it. If you're more a suburban chain restaurant kind of person who likes the same old same old -- you might not.

What we also like is that Virgin Voyages is really leaning into the sea, with plenty of classical nautical touches. Most venues have windows framed as large portholes, with room to curl up and look up. The vast majority of cabins have balconies, with your own hammock for lazing. Even the centerpiece light in the round

Far from hating on cruising, Virgin Voyages has updated it, Savereimuttu said. "It has all the elements of a cruise, but we put our Virgin twist on it," he said. "At the heart of it, it's still a cruise."

Consider us ready to board.