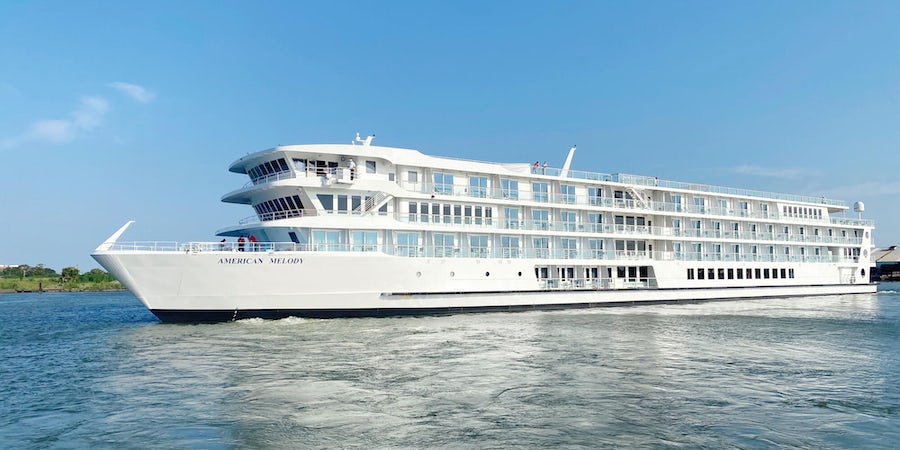 Passengers embarked American Melody in Natchez, Mississippi on Friday, which served as a replacement starting point for New Orleans because of the impact from Hurricane Ida, for American Cruise Line's 22-day "Complete Mississippi River Cruise".

Those sailing aboard the 175-passenger ship are being treated to to a variety of inaugural events and special surprises, along with Mississippi-inspired meals and beverages onboard. It's a massive itinerary on a scale not typically seen on U.S. rivers, which tend to be overshadowed by the likes of Europe's Danube, Rhine and Main -- the blockbuster players on the river cruising circuit.

But in launching this extended Mississippi River cruise itinerary, American Cruise Line is betting that more Americans will want to travel closer to home, with COVID-19 still complicating travel for Americans looking to go to Europe and looming uncertainty around entry requirements and, of course, the emergence and spread of the delta variant.

"Longer itineraries have become increasingly popular, so we plan to offer more of them in different U.S. regions," American Cruise Line President and CEO Charles B. Robertson told Cruise Critic in an email. "This extended itinerary gives our guests a rare, unique opportunity to explore the Mississippi and over 10 states in a single journey."

"We are also expanding the opportunities for our guests to connect seamlessly between our existing cruises in different U.S. regions -- from Alaska to Florida or from the Mississippi to the Columbia and Snake" rivers, he added.

American Melody is the second newbuild to debut this year from American Cruise Line, following the launch of American Jazz in April. The line is also adding capacity next year with the launch of two modern, similarly styled riverboats: American Symphony and American Serenade.

"American's design focus has expanded the possibilities for river and small ship cruising close to home tremendously," Robertson said of American Melody and its fleetmates, which were among the first non-paddlewheel-styled newbuild riverboats to debut on American waterways.

"American Melody raises that standard again and compares well to any riverboat in the world."

With travelers showing a preference to stay close to home and engage cruises from domestic homeports, the U.S. river cruise industry has its chance to grow exponentially.

With travel restrictions growing for Americans, Europe's loss could well be America's gain in this formerly niche area of cruising that is quickly becoming more mainstream, thanks in large part to unique itineraries like this 22-day voyage that set off last week aboard American Melody.