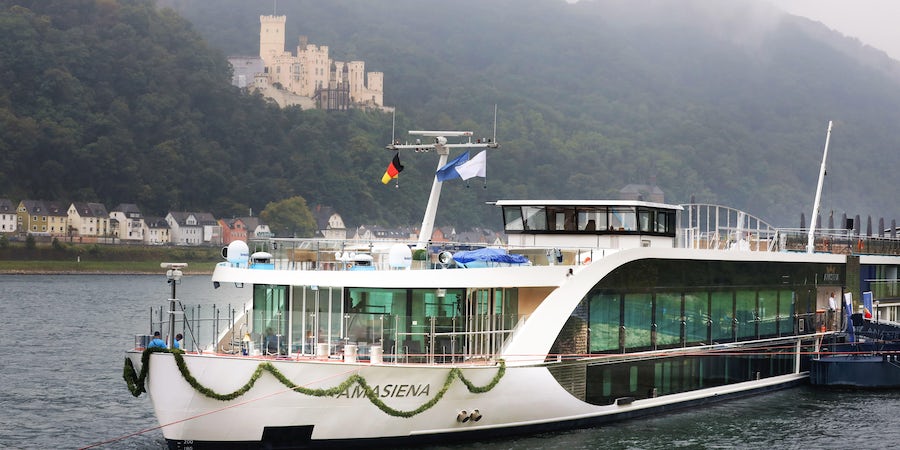 Live From AmaWaterways: What It's Like To Be On A River Cruise In Europe Right Now

(9 a.m. EDT) -- "This reminds us of old times," said a guest entertainer, finishing a particularly spirited rendition of "Y.M.C.A," as AmaSiena made its way up the Rhine River.

An after-dinner crowd had gathered in the ship’s lounge to listen to Motown and country favorites. But though the audience’s response was enthusiastic, this wasn’t quite like old times.

For one thing, thanks to COVID, dancing was verboten. Instead, the rhythmically inclined were left to get their grove on by twisting back and forth in their swivel chairs. Plexiglass partitions separated seating areas. And many revelers were wearing facemasks.

Even so, in many ways it’s business as usual on this seven-day christening cruise on AmaSiena from Amsterdam to Basel, Switzerland.

But in other ways, it isn't.

I arrived at the ship docked near Amsterdam’s central train station in the early morning after an all-night flight from the United States, and watched from the motorcoach as our luggage was offloaded and sprayed with disinfectant. An AmaWaterways employee boarded to tell us we couldn't embark until noon, since the ship was undergoing a four-hour deep cleaning. So instead of relaxing in comfy lounge, I hit the overcast streets of Amsterdam.

There, I discovered one of the upsides of COVID-era travel: the lack of tourist hordes. On my last trip to the Netherlands capital a few years ago, Dam Square, the Red Light District and other visitor hotspots were cheek-to-jowl.  This go-round, downtown was bustling, yes, but with what appeared to be mostly unmasked locals going about their daily routine.

Another upside, particular to pandemic travel with Ama: the line's emphasis on active, outdoor excursions. Daily options include guided bike rides and hikes, along with less strenuous walking tours.

I saw Cologne from another vantage point by cycling five miles along one bank of the Rhine, and the same distance on the opposite side for the return trip. On a sun-dappled day in Strasbourg, France, we peddled a leisurely 13 miles, taking in downtown's blend of German and French culture in one of the world's most bike-friendly cities. But we also visited out-of-the-way neighborhoods, giving us a guilt-free pass to stop at a riverside outdoor café and indulge in the local favorite, an Alsatian bacon and onion tart, with a glass of sparkling cremant d'Alsace.

COVID closed the floodgates on river cruising in a way low-water levels, recession, and even terrorism couldn’t. Pre-COVID, the industry was booming, growing by 10 percent in 2019.  Americans comprised a third of passengers.

In June, after a year-plus hiatus, leisure ships catering to North Americans began returning to Europe’s rivers, though their numbers are still far reduced.  In a typical summer, vessels are often lined up three deep at some docking sites, obstructing views and creating potential logjams for passengers getting on and off the ships.

Not this year. When we docked in the shadow of the Gothic splendor of Germany's Cologne Cathedral, for instance, we were one of only three such ships. Usually in late August, the total would be more like 14, our local guide estimated.

Sixteen of AmaWaterway's 25 ships are operating at present, but at a capacity capped at 75 percent to allow for more social distancing.  We’re sailing with 103 passengers (the ship can accommodate 176), which includes a contingent of travel agents and media here for the christening of the new vessel. AmaSiena’s just-launched sister ship, AmaLucia, is sailing nearby on the Mosel, but with only 27 passengers, due to a flurry of cancellations. Previously the ship had been 75 percent booked.

Cancellations notwithstanding, cruisers are generally more at ease with the prospect of sailing on small ships, noted Mike Ziegenbalg, a travel agency owner from suburban Atlanta onboard AmaSiena.

"People are more comfortable when they’re not sailing with thousands of people. But at the end of the day, it’s a personal decision," he said.

"Bookings are now coming from the top. Everyone wants the best cabin," Karst said.

That might be because premium staterooms with balconies allow for more air circulation -- a concern for some in COVID times. But also, some people have extra money to spend after hunkering down close to home for 18 months.

After initially returning to service in Portugal in early July with no vaccination mandate, AmaWaterways joined other lines in requiring guests to be vaccinated. Masks must be worn in public areas (though not the N95s stipulated in the line's passenger information). The gym, which normally might comfortably accommodate seven or eight for workouts, is limited to two people.  And the multiple daily group exercise sessions are capped at six when weather prevents them from being held on the open-air top deck.

As on other ships, buffet service is a thing of the past, but buffets were never a big part of the Ama dining scene, anyway.  Attendants at the formerly self-serve coffee makers in the lounge now do the honors. And open-seating in the dining room is now assigned. The ship's Chef's Table restaurant, designed for 24 to 26 diners, is limited to 16 in keeping with the 75 percent capacity rule.

But these onboard adjustments sparked by COVID are relatively easy to grasp. More vexing are the oft-changing -- and sometimes seemingly capricious -- government mandates. The Netherlands requires filling out a health form in advance, but no one asked to see mine. Once on board, we were told before crossing into Germany we’d need to upload our vaccine certificates to an app that requires two security codes to do so. After three tries, I still wasn't sure if I'd been successful and sought help from the cruise manager. I wasn't alone. She’d already assisted 80-some fellow passengers.

France requires a health pass to enter restaurants and attractions. We skipped the process, getting the Kafkaesque instructions for getting one. As it turned out, our café waitress simply requested to see a photo of our CDC vaccination card.

Also unclear is precisely what it takes to get off the ship and onto a flight home. AmaSiena offers PCR tests for 60 euros, but did away with providing the cheaper, faster antigen test (all that is required by the CDC to reenter the U.S.). Onboard information is conflicting, but you can hardly blame staff, struggling to keep up with policy changes and testing hiccups, from false positives to unreadable results.

"Every day is changing. Countries are going back and forth,” Karst said.

Indeed, the European Union on August. 30 announced new restrictions on unvaccinated U.S. travelers.  And, when I returned to my cabin after dinner, lying on my bed was a Sworn Undertaking to Comply with Rules for Entry into Metropolitan French Territory, in advance of our arrival in Strasbourg.  I declared "on my honor," that I hadn’t had any of eight symptoms in the past 48 hours (including "Unusual shortness of breath when I speak or make the slightest effort").

But back to more hopeful moments from an all-around enjoyable respite on the Rhine. The Y.M.C.A singer ended the performance with this request: "Please come back to the Rhine next year and then we’ll have a party."