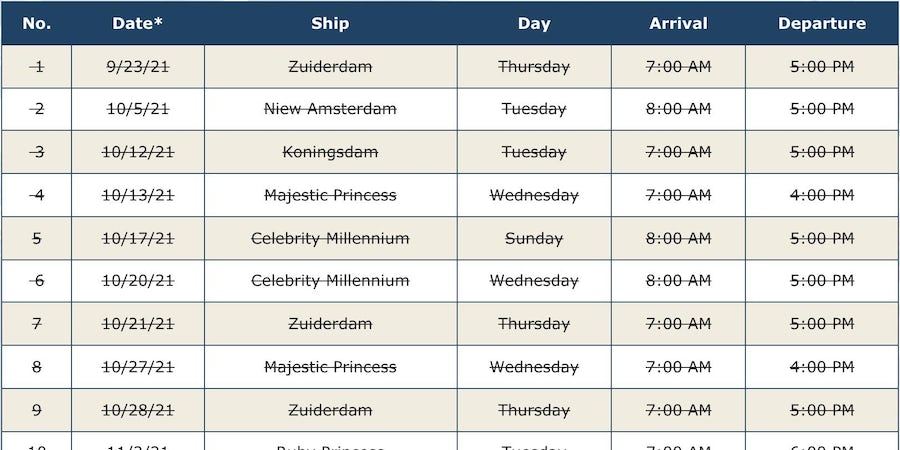 Port of Santa Barbara Cancels All Cruise Ship Calls Until 2022

(12:30 p.m. EDT) -- The California port of Santa Barbara has announced it will cancel all cruise ship visits for this fall, affecting Pacific coastal and California coastal itineraries onboard Celebrity Cruises, Holland America Line and Princess Cruises.

"Due to local increased COVID infection rates, the Santa Barbara Waterfront Department will be continuing the suspension of all cruise ship visits to Santa Barbara, until March 1, 2022," statement on the city's website read. "This will provide time to see how the impacts from COVID unfold, as well as work with the industry and stakeholders to determine the right time to reinstate this program safely.

"The next cruise ship on the schedule after the suspension is March 10, 2022."

The first ship to call on Santa Barbara was scheduled to be Holland America Line's Zuiderdam on September 23, with Princess Cruises' Majestic Princess rounding out the season December 19.

Calls aboard those two vessels, along with Nieuw Amsterdam, Koningsdam, Celebrity Millennium and Ruby Princess, have also been canceled through the end of the year by the Santa Barbara Waterfront Department.

The port has been a popular addition in recent years on California coastal cruises that typically run during the shoulder months, acting as a bridge between the Alaska cruise season and the start of the Mexican Riviera and Hawaii cruise seasons that take over in the winter months.

Cruise Critic has reached out to affected lines about the changes and will update this article as needed.