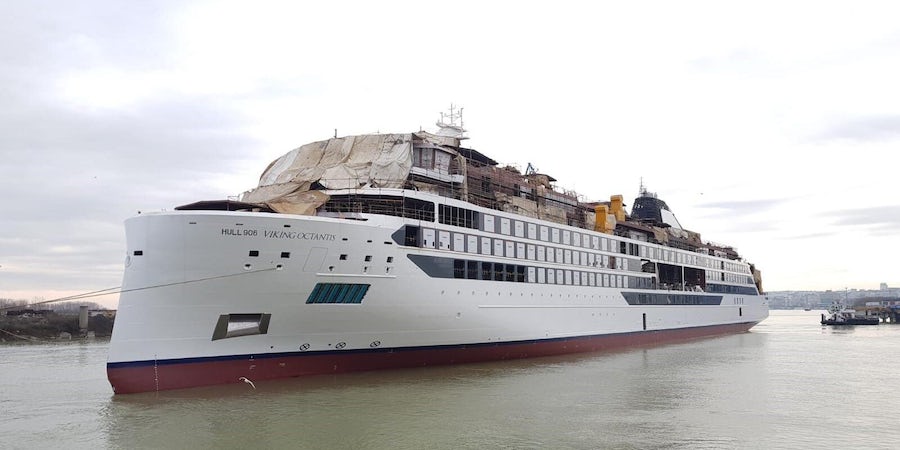 (9:30 a.m. EDT) -- Viking's expedition ships, coming in late 2021 and 2022, will have onboard lab facilities so passengers can be tested for COVID-19, the cruise line's founder and chairman said.

"We believe this is the right thing to do," Torstein Hagen said.

The move extends the health and safety practices that Viking instituted on its ocean cruise ships when cruising resumed in May. Viking is the only cruise line to have a full PCR testing labratory onboard.

Passengers and crew are tested daily through a saliva PCR process. You are given a test tube in your cabin nightly, and you spit into the tube when you wake up, before you brush your teeth or drink coffee. The cabin steward collects the tubes in the morning.

It's a process that seemed like overkill on paper a few months ago, but as the COVID-19 pandemic continues to rage on, it is instrumental in allowing passengers to feel safe when traveling (myself included).

A Look Into the Lab

Cruise Critic toured the lab on Viking Venus, the line's newest ocean ship, which is cruising the Mediterranean from Malta. The equipment is state-of-the-art, encompassing a dual process that first extracts the RNA from the saliva before running the samples through a second machine that detects COVID-19. The lab can run up to 1,500 samples a day.

Results arrive within four hours. While the test is sensitive, it's extremely accurate; COVID-19 positives are detected early in the incubation period, well before a rapid antigen test would pick it up, Hagen said. When a positive occurs, it's double checked with a second saliva test, as well as a swab.

Passengers who test positive are isolated, and if the secondary results show COVID-19, the guests are taken off the ship. Close contacts are notified, tested and monitored. All passengers on Viking ocean ships carry a small contact tracing device, which is generally not triggered unless you've been around a positive case indoors for longer than 15 minutes.

What happens next depends on the country; Viking has agreements and protocols with every port. In Malta, for example, positive cases must go into a 14-day quarantine. While the costs of this are picked up by the cruise line, Cruise Critic recommends all passengers traveling overseas for the near future purchase travel insurance that covers trip delay and COVID-19 medical costs.

Since Viking resumed cruising, they have tested more than 19,656 people on their ocean cruises, as of August 26 – with a result of 32 positives from vaccinated passengers, Hagen said. Only four of those cases were symptomatic, showing that Viking's protocols have caught people with the virus who would never have known they have it, allowing them to be isolated and offboarded before causing an outbreak. Two of the four cases required hospital care. (On our trip, two passengers tested positive on the first day and were offboarded in Malta.)

While Viking recommends people take PCR tests on their own before they arrive at the ship, it's not a requirement for vaccinated travelers entering Malta -- and so positive cases will show up, especially with the delta variant being so widespread, the onboard ship doctor told us.

The biggest factor that leads to surprise positive tests for passengers is usually travel before they arrive or going out to a gathering with unvaccinated friends and family before their trip, the doctor said. More advice from Cruise Critic: Wear a mask, preferably a KN-95, when you're at the airports, on planes and in transit, and lay low in the time period between your last PCR test and your trip. You don't want your expensive European vacation to be ruined by dinner with your in-laws.

Testing Not Cheap, But Necessary

Daily onboard testing is not cheap; Hagen said the line is spending as much on testing as they are on fuel this year. But he said early on, he and the line's medical consultants recognized that testing would be important for maintaining a safe atmosphere, beyond vaccination and masking (which are also required).

Testing is also giving the line confidence to go ahead with its world cruise, at a time when other cruise lines are canceling. (Viking's 2021 world cruise is scheduled to depart December 24.)

Having testing on the line's the 378-passenger expedition ships -- Viking Octantis and Viking Polaris -- will also be key in creating confidence on far-flung itineraries. Viking Octantis which will debut in December 2021 and will sail in the Antarctic and the Great Lakes. Viking Polaris follows in summer 2022, cruising in the Arctic and Antarctic.

Viking does not have PCR labs on its European riverboats, although passengers still take saliva PCR tests daily. Hagen said that's because the ships are so close to labs and health facilities onshore.

All in all, 2022 is shaping up to be a big year for Viking. The line is launching its Mississippi River ship – the 386-passenger Viking Mississippi – in summer 2022. Viking also has more specialty river ships in Egypt and on Asia's Mekong coming, as well as two more ocean cruise ships, Viking Mars and Viking Neptune, coming in May 2022 and November 2022 respectively. Eight new European Longships are being added in 2021 and 2022.

The constantly changing nature of the pandemic has been difficult for cruising; even on Viking Venus' current sailing, British passengers were surprised when the U.K. government suddenly put Montenegro, which is a scheduled stop on the current itinerary, on the red list. To help the British guests avoid an expensive quarantine, Viking gave them cabins on the next cruise and rebooked their flights from Athens.

All in all, though, Hagen said that he's "bullish" on the future. Projected revenue for 2022 is already 41 percent higher than it was in 2019, driven in part by the new expedition and Mississippi River expansion.

"We have been fortunate," he said, noting that Viking is not a public company. Besides Hagen, there are two other shareholders in Viking who were happy to invest, he said. "They saw it as a great opportunity.

"We are a great company and we should have enough finances not to worry about anything. We are in a very good position."