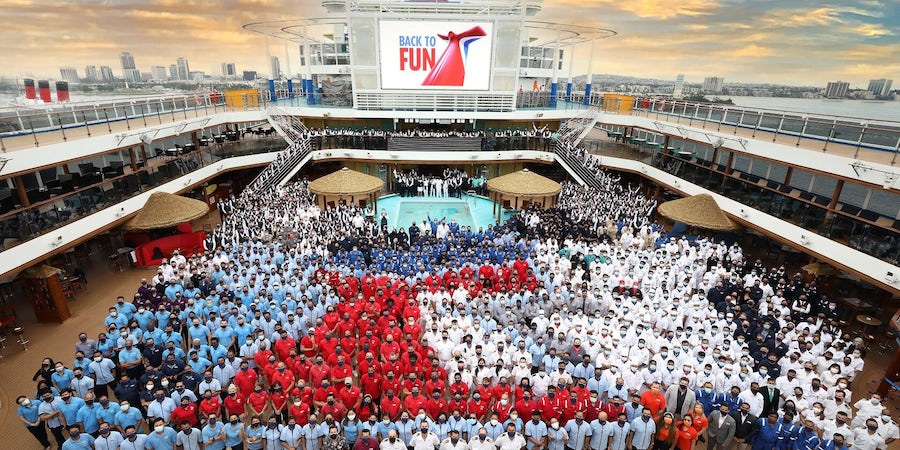 Cruises Restart on Two Coasts This Weekend, With Sailings from New Jersey and California

(12 p.m. EDT) -- The great cruise restart continues this weekend as the first ships to set sail from New Jersey and California since the start of the global health pandemic officially set sail.

On the west coast, Carnival Cruise Line is resuming its popular Mexican Riviera sailings from Long Beach aboard Carnival Panorama -- a ship that had the quiet misfortune to debut just months before the global travel shutdown. This first revenue cruise sets sail on Saturday.

Out east, Royal Caribbean will operate its first voyage -- actually a test cruise -- from Cape Liberty (Bayonne), New Jersey aboard the iconic Oasis of the Seas. It is the first ship to resume operations from the New York area since the start of the global health pandemic some 18 months ago.

Both sailings represent another small step in the measured cruise industry restart that began earlier this year. Within the United States, sailings have already resumed from Florida, Texas and Washington State, sailing to the Caribbean, Bahamas and Alaska.

Long Beach, near Los Angeles, is a key west coast turnaround port for Carnival Cruise Line, with the terminal situated adjacent to the historic RMS Queen Mary of 1936. Likewise, Cape Liberty is the exclusive domain of Royal Caribbean Group vessels embarking in the New York area (other lines use the Manhattan and Brooklyn cruise terminals).

On Saturday, August 21, Carnival Panorama will set sail from Long Beach on Carnival's traditional Mexican Riviera voyage. Carnival is the only line to sail year-round to the Mexican Riviera, with each seven-day voyage stopping at Cabo San Lucas, Mazatlan and Puerto Vallarta.

The ship will continue to offer its program of Mexican Rivera voyages into the fall and winter months, and will be joined in the region by smaller sister-ship Carnival Miracle, which assumes short three-and-four-night Baja Mexico itineraries on September 27 formerly held by the now-scrapped Carnival Imagination and Carnival Inspiration.

Carnival has invested a lot of time and money in its Long Beach homeport, recently putting its iconic terminal (originally used to house Howard Hughes' Spruce Goose) through a major facelift intended to beautify and improve the passenger experience at embarkation and disembarkation.

August 22: A Test Cruise aboard Oasis of the Seas from Cape Liberty

On Sunday, August 22, Oasis of the Seas will set out on its simulated test cruise in order to satisfy requirements by the U.S. Centers for Disease Control and Prevention as outlined in the agency's Conditional Sail Order.

The ship will also be using regular passengers from the line's Crown and Anchor program as test passengers as part of the new Volunteer of the Seas program.

So while this first voyage isn't indicative of the ship's full-blown revenue voyages that begin on September 5, it does mark a major milestone, with cruises once again sailing under the Verrazano Narrows Bridge and out into the open Atlantic for the first time since March 2020.

Cruise Critic has a writer onboard this first test sailing of Oasis of the Seas who will be detailing the preview sailing as it progresses.