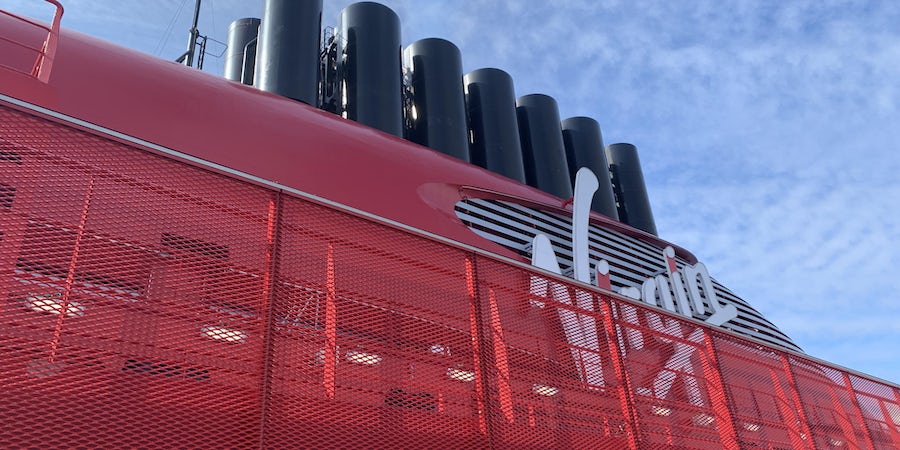 The ship is coming soon to the United States, and the Miami crowd has a lot to look forward to, as I wrote while onboard. My initial thoughts from the first time I saw this ship on an overnight in Dover in Feb 2020 were flipped on this short break.

Here is a little more detail after a few days back on dry land on why I think Scarlet Lady is a genuine game-changer -- and what can still be improved.

An almost unbreakable -- almost, because I did break mine immediately -- bracelet acts as your key card and payment device (and, I suspect, as a COVID-19 track and trace). I took it into the sauna, the spa, the gym, the steam room and the shower -- and it still worked.

If you're like me and can never find your key card, the best thing about having it on my wrist was that I could always leave the cabin without spending 10 minutes digging around on my desk/bed/pile of clothes to find where I left the card.

(Incidentally, I broke it by removing my raincoat -- which has a very tight sleeve -- at security. It simply snapped open).

When the Virgin app works, it's great. The challenge we had was Wi-Fi, which was poor. As Virgin pointed out, this was because the satellite is 25,000 miles away; it will be better when the ship gets over to the U.S.. It's intuitive, informative and functional -- one of the better cruise ship apps we've used.

Announcements -- Or Lack of Them

Apart from the first day with the Captain encouraging us to go to our muster drills, there were no announcements after the first day. It struck me on Day 3, when we  would have liked a few words from the Captain as to where we were in the Channel. Compared to most ships, it was a relief not to have a constant stream of announcements.

I'd be hard-pressed to find a genuinely happier and friendlier bunch of crew. We've written this many times, but cruise ship service is already up there with the best, but this was something else.

There is the usual Virgin nonsense about making everyone "feel like a rock star", but that is how they made you feel.  Really. It's as if you are the most important person to them at that moment you are interacting with them.

There are some good reasons for this warm atmosphere: Crew have free Wi-Fi; free premium coffee; there is a far higher proportion of single rooms available for crew than on your typical ship and crew get a weekly service of their cabin (again, this is not typical on other lines).

Add the fact they are all dressed stylishly, and there is no difference in uniform between officers and crew, and you can see that it all starts to make sense. They are also a pretty cool bunch -- I'd say at least half have very visible tattoos/piercings and facial hair/cool haircuts.

It's telling that 85 percent of crew returned, following the global shutdown (bear in mind none had actually sailed with paying passengers at that point), according to Nirmal Saverimuttu, Chief Operating Officer.

It's such a huge contrast to a "typical cruise ship experience," but it is. That's is not to say that crew on other ships do not give an exemplary service. It's just that crew on Scarlet Lady seemed to be more empowered to engage and chat. We recognise some people might not like that, but we personally did.

I have already written extensively about the food onboard Scarlet Lady, but it does deserve another mention. One of the things that is best about it is that there is no main dining room.

As Saverimuttu explains, it is difficult to retain a high quality of cuisine when you are mass catering and it also leads to food waste.

"Each restaurant has a galley attached to it, each galley has an executive chef manning it, just like you'd expect in restaurant in London or New York." Each venue also has its own trained group of waiters, sommeliers and mixologists, all assigned to that specific area.

"Here, because food is made to order, food waste is reduced significantly allowing us to reinvest that into the quality," he said.

We really thought this was just another clever re-branding of what on all ships is known as "The Buffet". We were wrong, again.

The series of counters and food trucks actually has different types of food than you'd find at a regular buffet. You can have not just huge haunches of roast beef or burgers and hot dogs -- all available -- but also ramen broth, sushi, bento boxes, deli-style sandwiches, tacos -- all made fresh, in front of you. And it's "on trend" food, this is what people expect on land.

Also an honorable mention must go to the all-day breakfast, which is genuinely served all day.

We love this space and are happy to admit that we spent a considerable amount of time here. Is it worth $70 for a day pass? No, not really, unless you stay all day; but if you do like a thermal suite, then this is one of the best we've spent time in.

What stood out for us was the variety of experiences: a mud room; a steam room; a salt room; a sauna; two cold tubs and one hot tub and a pool; plus plenty of heated loungers with lovely views out of the porthole windows, almost a sea level. It was tranquil and calming --  a lovely space to retreat to from the craziness on the rest of this ship.

On the last day, I was headed to the gym to run when I overheard talk of a top deck running track. I've run on a few ships before and it's always tricky weaving in and amongst the deck chairs, waiters and disgruntled passengers, so I wasn't overly keen. However, Virgin has built a dedicated track (in bright red), just for runners and walkers, which is suspended above Deck 16. It's clearly marked (6 laps = a mile) and there are two lanes. Again, it's a case of rethinking what works and what doesn't and coming up with an elegant solution.

Below is a boxing ring, an outdoor gym and right at the aft, a bouncy net suspended 16 floors above the water. It was closed on our sailing.

There's only so much we can take when it comes to rethinking things and the safety video is just too much. This is a personal opinion, we absolutely concede that some passengers might like a rock version of the safety video, screamed at you by various different characters, with the safety message buried somewhere among the singing and the images.

I think the perfect compromise is Celebrity's spy spoof, which is entertaining, but also gets the safety message across. The Virgin one does not.

The main pool is still too small, however much Virgin spins it. Yes, it looked bigger when it was full, and we agree that most people tend to dip rather than do laps. But for a ship this size, heading to the Caribbean, it needs to be significantly bigger.

In a standard balcony cabin (which comprise the majority onboard), bathroom space has been sacrificed for cabin space. Though the actual shower cubicle is a decent size, with a wonderful rain shower head and a handheld spray, the rest of the room is tiny, way smaller than what you might be used to.

What we realized on our last sailing was that Scarlet Lady is not just style over substance. Virgin has poured its heart and soul into coming up with a ship that breaks convention, dares to be different and makes you the passenger feel special.

We haven't even mentioned the top deck pool party; the outstanding coffee; the lovely dining room at the back, The Wake, where we had a sublime New York strip steak; the private cabanas decked out like English beach huts; the end-of-cruise pool party, Oddysea, where cast -- and passengers -- were invited to take a dip; and countless other little things around the ship that surprise and delight.

Scarlet Lady is not for everyone, but Virgin doesn't do vanilla.