You may also like
Dismiss
Norwegian Cruise Line Holdings and Huna Totem to Construct New Alaska Cruise Pier
Regent Seven Seas Cruises to Offer New Local Excursions, Onboard Entertainment and Kids' Tours in Alaska
Norwegian Announces U.S. Return to Service With Alaska Cruises
Serenade of the Seas Sails From Seattle for Alaska, Marking First Cruise Ship Back
Royal Caribbean Cruise News: Just Back from Serenade of the Seas, and Alaska's Restart
Norwegian Cruise Line News: Line Prepares to Welcome Passengers Back on its First U.S. Sailing Tomorrow
Norwegian Encore Becomes First Norwegian Cruise Line Ship to Resume U.S. Service as it Sails for Alaska
Just Back from an Alaskan Cruise Aboard Norwegian Encore: Hits and Misses
Just Back from a Majestic Princess Cruise to Alaska: Hits and Misses
Alaska's First Full Cruise Season Since 2019 Kicks Off with NCL's Norwegian Bliss 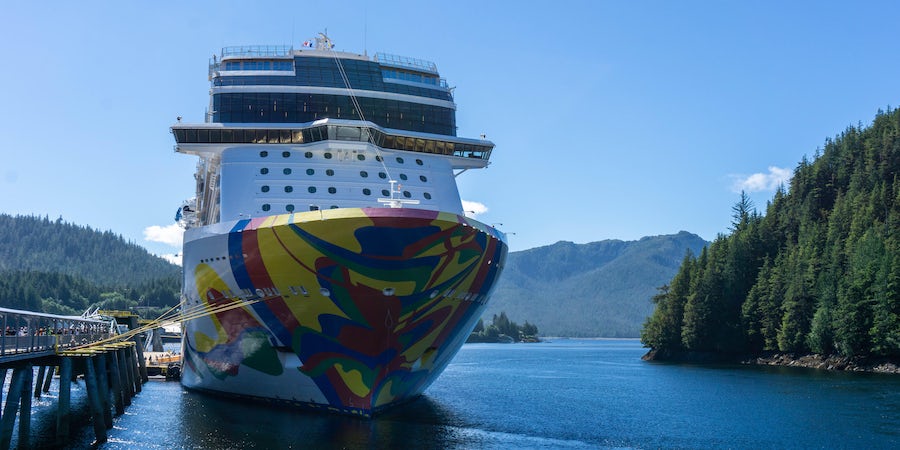 As part of the first Norwegian Cruise Line sailing to resume in the United States, Norwegian Encore sailed into its new Ward Cove docking facility on the tail end of a weeklong cruise that also included port stops in Icy Strait Point and Juneau greeted by native Tlingit Alaskans.

Norwegian Cruise Line Holdings has preferential berthing rights for the next 30 years at the new facility, which was developed in conjunction with Ward Cove Dock Group. Two Breakaway-Plus class vessels (like Norwegian Encore) can tie up here at once.

A former pulp mill built in 1954 that operated until 1997, the site is located about 15 minutes north of Ketchikan by car, and still appears on itineraries as such. But Ward Cove is designed to be a bit of a self-contained environment -- an attraction in its own right, with an on-site museum, restaurant, artisanal shops and a transportation center to whisk passengers into town, or out on excursions to explore the Tongass National Forest and other nearby environs.

It is also designed to keep these megaships from flooding the town of Ketchikan with too many passengers at once. The city currently has four cruise berths, the last of which is approximately 10-minute walk into town.

But Ward Cove also gives Norwegian Cruise Line something it has been seeking out for years: preferred berthing rights in a region of the world known for grandfathering in lines that have been operating here for decades with preferential docking rights.

Ward Cove is the second new facility Norwegian Cruise Line Holdings has inaugurated on this sailing of Norwegian Encore, having officially opened its new facilities in Icy Strait Point earlier this week.

The Mill at Ward Cove (as it is officially known) isn't done yet. The cavernous warehouse building that served as the old mill is still mostly unfinished, though local vendors have set up shop and several unique installations -- such as swanky washrooms inset within old railroad cars acquired from BC Rail that used to transport pulp products between Ketchikan and Prince Rupert, British Columbia -- provide a glimpse of what Ward Cove will be.

Eventually, the facility will include a reproduction of the Tongass National Forest to greet passengers, giving way to artisanal shops, food and beverage options, an auditorium, and exhibits on the history of the mill and Ward Cove.

There are also (very long term) plans for a gondola to take passengers up the mountain next to the pier; hiking trails; and even private cabins passengers will be able to book for the day to create their own wilderness retreat in the heart of Alaska.

For the rest of this season, passengers can expect to find shops and food and beverage options as work continues transforming the mill site, the process of which has won environmental sustainability awards for the Ward Cove Group's commitment to cleaning up and restoring the former industrial site.

A shuttle takes passengers looking to explore independently into downtown Ketchikan for an $8 roundtrip, but lines were long, exacerbated by a 60-minute delay in our arrival into Ward Cove. Coupled with the fact that both of the busses we took had no functioning air conditioning on one of the hottest days of the year in Ketchikan (a port known for its rain and cool temperatures), tempers ran short.

In the interim, it's not a bad idea to book an excursion to ensure you maximize your time in the area.

But this is Ward Cove's first-ever day in operation with paying passengers -- a test run, in effect. Speaking with port officials, Cruise Critic has every confidence these issues will be resolved as the season progresses.

Ward Cove also offered one of the most tranquil and scenic departures we've ever had in an Alaskan port of call, nestled within a secluded bay away from the bustle of float planes, fishing vessels and other ships.

Norwegian Cruise Line Holdings has staked its claim in Southeast Alaska. In addition to the new facilities here in Ward Cove and in Icy Strait Point, NCLH has also invested $20 million in a three-acre parcel of land on Juneau's waterfront that it won at an auction from the former owner, Alaska Mental Health Trust, in 2019.

A report from Alaska's KTOO stated the bid was the highest ever received by the Trust in a land auction. The second highest bidder was Royal Caribbean Group, with an offer of $13 million.

The parcel of land -- located on an unused plot along Gastineau Channel -- will be used to develop new docking facilities in Juneau specially-designed for these new Breakaway-Plus class vessels.

Docking space is at a premium in Alaska, where geography stands in the way of expansion. Land for new docking facilities is extremely limited, which causes bottlenecks as Alaska's popularity as a cruise destination grows exponentially with each passing season.

The truncated season of 2021, and the lost season of 2020, appear like blips next to 2022 and 2023, both of which currently call for full seasons of cruise ships visiting Southeast Alaska and maxed-out berths on popular days.

Norwegian's new Ward Cove facilities in Ketchikan will alleviate that strain, allowing passengers to come ashore and experience Alaska's fascinating natural and cultural history while still providing assurances to locals and business operators that towns and destinations will not be overrun.