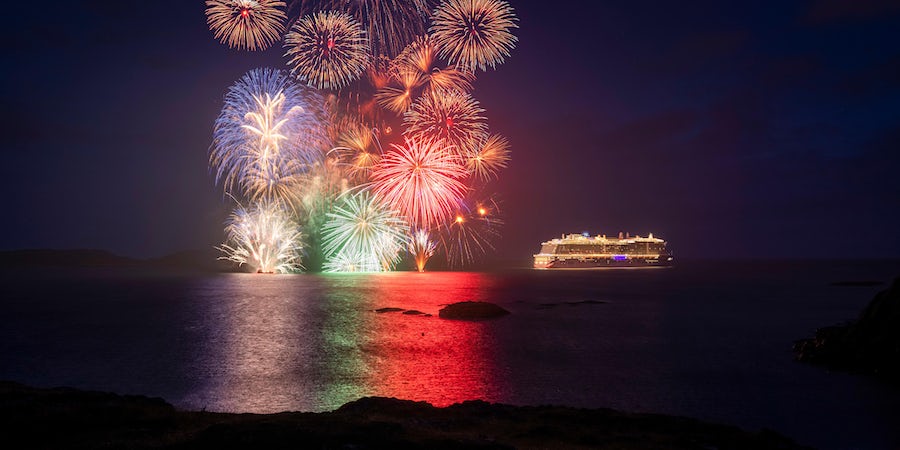 The ship is on a seven-day round-Britain cruise carrying 2,500 passengers (just under the Government-mandated limit of 50 percent), an astonishing 85 per cent of whom are P&O regulars.

There are no port stops, but yesterday we moored off the island after which the ship gets her name and were treated to a spectacular fireworks display.

But after all the build-up (the ship was due to launch more than a year ago), what's it like onboard?

At 185,000 grt, and 345m long, Iona is undeniably enormous but once you start to find your way around, there's a lot to like. The focal point is the beautiful Grand Atrium, light flooding in through three decks of floor-to-ceiling glass, the interiors all white marble and gleaming chrome and a sweeping marble staircase at the centre on which to strike a pose.

The venues around the atrium have a happy buzz. There are some old favourites including an expanded Glass House, a wine bar and tapas restaurant with wines by the glass selected by Olly Smith. The Keel and Cow, a new restaurant, one deck up, enjoys the same dreamy views and offers steaks and burgers.

Much has been made of the SkyDome, an intricate glass dome covering the a two-deck-high pool area on deck 16. The biggest structure of its kind at sea, the dome is rigged for aerial acts and laser shows, while a moving cover turns the pool into a stage in the evenings. On cool days, this area is packed, if noisy, and I imagine it'll become a hopping nightlife venue once the ship is full, with DJ sets curated by former Blur bassist Alex James, laser shows and dry ice.

The aerial shows are repeated three times a night and are certainly dramatic; it's like being in a big, glass-enclosed circus tent. They're all themed. We saw "Rise", a loose storyline about birds of paradise and pigeons, but the theme doesn’t really matter -- it’s the trapeze acts and the costumes that everybody wants to look at.

Other new and impressive features include two infinity pools overlooking the cascading aft decks and offering fantastic views. We're in the Hebrides at the moment and lying at the infinity edge of the pool, gazing out at rocky islands scattered around the ship is just breathtaking. Way below the pools, on deck 8, the Sunset Bar, overlooking the wake, is shaping up as the best spot for sundowners, with live music and a great buzz. A pod of dolphins cavorting off the aft of the ship provided added thrills yesterday.

Much has been made of Gary Barlow's involvement with P&O and last night we went to the venue he masterminds, the 710 Club. I loved it. Because Iona is so huge, a lot of the lounges and bars feel rather cavernous but this dark, intimate little space has the sense of a proper jazz club, with a superb band, last night doing acoustic covers of rock anthems and jazz classics. Somebody needs to train the bartenders not to rattle cocktail shakers in the middle of a number, though.

Other new-to-P&O features include a four-screen boutique cinema, which seems popular and is a fun way to pass a drizzly afternoon, and the first gin distillery at sea, sitting behind a wall glass in Anderson’s Bar and producing Marabelle, P&O's signature gin, which is on sale in all the bars.

How About the Cabins?

New to Iona are 95 conservatory mini-suites and I’m lucky enough to be in one. It's gorgeous. Between the cabin and the balcony, there’s a glass-enclosed living room with a big sofa and ottoman and planters of greenery (artificial) as well as a potted orchid. When the ship is in the Norwegian fjords, these suites are going to come into their own.

You can sit in the conservatory, or the garden, as our cabin steward rather sweetly calls it, and stay warm but still enjoy the views, or fling open all the doors to let the fresh air in. These mini suites are on decks 8 and 9 and my advice would be to go for deck 9, looking down on the promenade deck. If you're on deck 8, people strolling along the promenade can peer over the rail of your balcony. You also don’t have the same connection with the sea.

One thing that's becoming clear as cruising's great comeback progresses through the summer of 2021 is that every line interprets health protocols differently. P&O Cruises requires all adults to be double vaccinated (and children can travel from September 25 if they take a PCR test) but you still have to take an antigen test at the port.

All the Carnival brands share a big drive-through testing centre at Southampton, so we were checking in at the same time as Regal Princess. From arrival at the port to embarkation took two and a half hours, including an hour waiting in a holding car park. People who arrived by train breezed through in 30 minutes, using a walk-through testing centre at the Ocean Terminal. So there's a lesson to be learned there: arrive by train.

Onboard, there's social distancing everywhere, with around half the chairs and tables in each venue sporting stickers saying they're out of action. This means there can be queues at popular venues like the Crow's Nest bar late at night, which is upsetting P&O regulars.

Mask wearing is required everywhere inside and passengers are complying; I haven't seen anybody disobeying the rules. Temperature-taking doesn't seem to be a requirement, although there's hand sanitizer everywhere and I have noticed a lot of crew diligently cleaning high-touch areas like stair rails. But life on board feels pretty normal in most ways.

One thing that seems strange to me is that evening turndown service has stopped. Our cabin steward says it’s ‘because of the protocols’ but if the cabin can be cleaned in the morning, I don’t see what’s different about cleaning it in the evening, too. I’ve always felt evening turndown was one of cruising’s little luxuries and I’m sorry to see it disappear.

What Do the Passengers Think?

The passenger profile on this maiden voyage is unusual in that it's some 85 per cent repeaters, who all have their own ideas about what a P&O ship should be. Cruises after this, president Paul Ludlow tells me, have a much greater proportion of new-to-cruise and new-to-P&O passengers. "The average age of people booking is lower than we had when the world was 'normal'," he tells us. "Pre-pandemic, our average age was late 40s. Now, it's mid-40s."

These younger passengers, looking for the experience of a vast, floating resort with live music everywhere, masses of entertainment and for families, P&O's usual high standard of kids' clubs, are going to be wowed by Iona. Among the regulars, there's the inevitable chuntering along the lines of "it wasn’t like this on Britannia" (which of course was at the time the biggest P&O ship ever built).

Service in the restaurants is slow, the internet is hopeless (and will be fixed, we're told) and the My Holiday app, through which you make bookings for dinner and entertainment, is causing a lot of confusion. It's much easier to book a restaurant by phone. But it's early days, and the mood is happy.

Iona will sail five more "staycation" cruises in British waters after the maiden voyage and will then cruise the Canary Islands in winter and the Norwegian fjords next summer, with capacity gradually increasing and a goal of sailing 100 per cent full by March. For now, though, we're enjoying the sense of space offered by a half-full ship.