You may also like
Dismiss
Norwegian Cruise Line to Eliminate Towel Animals on Some Ships, Cut Back on Others
Just Back From Portugal’s Douro River: Cruising On A New Viking River Ship
Live From Variety Cruises' Galileo: The First Eastern Mediterranean Cruise in COVID Era
Just Back From The Greek Islands: Cruise Ports Filled With Locals, Not Tourists
Norwegian Cruise Lines Drops Ship-Sponsored Excursion Requirement
Norwegian Cruise News: Norwegian Jade Sets Sail From Athens, Marking Line's Return; New Homeport Announced
What Does the Legal Wrangling Between Florida and the CDC Mean For Cruisers?
Live From Norwegian Jade: What It's Like On The First NCL Cruise Back in 16 Months
New Omicron COVID-19 Variant Affects International Travel, Cruises in Africa
Norwegian Spirit Completes NCL's Full Return to Service 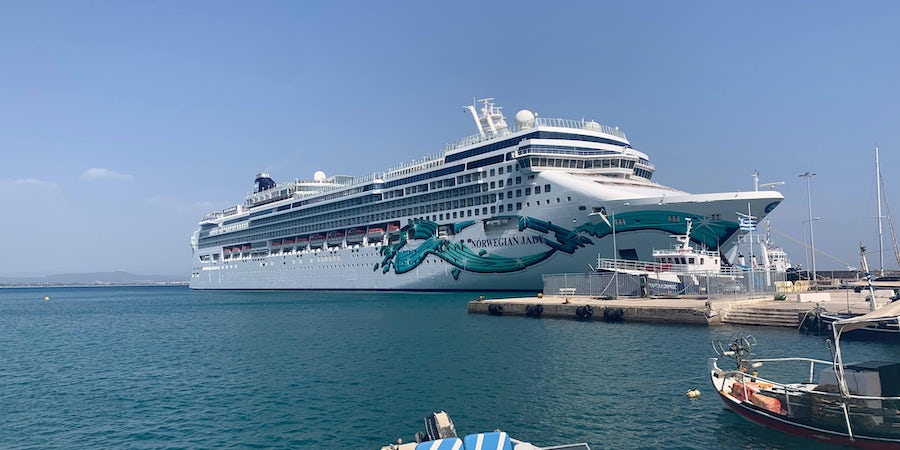 Just Back From Norwegian Jade: Hits & Misses From the First Cruise Back

(Noon EDT) -- I've recently returned from a week-long cruise around the Greek islands on Norwegian Jade -- the first NCL cruise ship back after a 16-month break in operations.

The 2,402-passenger ship set sail from Athens on July 24 around 70 percent full with fully vaccinated passengers only. Norwegian has followed its Greece launch with Norwegian Encore sailing from Seattle to Alaska, with Norwegian Gem to follow in Miami on August 15, now that parent company Norwegian Cruise Line Holdings has won the legal authority to require vaccinations in Florida.

We've already written about day to day life onboard the ship. Here are a few takeaways after a week back from Norwegian Jade.

The thoroughness of the new health regime is faultless, if at times exhausting. Norwegian has decided to go down a 100 percent vaccination route, for both crew and passengers, rather than mix it up as Royal Caribbean is doing, so precluding kids under 12.

And in hindsight -- with the Delta variant surging -- the line's strict policy is arguably the best course of action.

There were three health checks before boarding -- proof of double vaccination, proof of a negative PCR test and a last-minute antigen test just before we were allowed to board. Once on, mask wearing was required at all times. (This might have been driven more by the Greek government than NCL, which in our pre-boarding documentation stated it would be a mask-less cruise).

This was reinforced by signs, announcements and crew who I heard tell passengers (including me) to put on their masks. The captain also reminded people in his daily address.

And, bar one or two people, I hardly saw anyone not wearing their mask. Considering the majority of passengers were from the U.S., where mask wearing varies wildly by state, this was impressive. There was also a mid-cruise instruction (from the Greek government) to wear masks when ordering at outdoor bars, which again passengers followed.

Where the testing became exhausting was toward the end of the cruise when every passenger had to be tested before arrival back into Athens.

With almost 1,800 passengers onboard, this had to be done over two days in groups. What this meant in practice was near hourly "last and final calls" for Group XYZ to go to the Bliss Lounge/Schooner Bar -- over the course of 48 hours.

Yes, it was thorough. Yes, it was essential to do. But wow, was it relentless. I'm not sure what would be a less-intrusive approach, perhaps a push notification via passengers' phones or simply fewer announcements.

Norwegian gets huge kudos for covering these tests, which can cost £139 in the U.K. or $160 in the US; as well as covering medical bills for anyone who falls ill, regardless of their insurance policy.

As we have reported elsewhere, crew onboard those ships that have restarted are so happy to be back onboard -- and that shines through their masks. We have taken many big ship cruises before the pandemic, and it's hard to recall a time when the atmosphere was so positive and happy.

Cruise ship service levels are already far superior to most land-based hotels (in our experience), but on our cruise, crew took it to a new level -- and this was across the board -- from the cabin stewards to the Captain Ingar Kjellin, who was joking that he managed to get a really good spot in the Caldera in Santorini for us (we were the only ship in that day).

We spoke to two cast members doing double duty on day one, checking in people at their muster stations. They told us what a relief it was to be back on stage rehearsing ahead of their first live performance in more than 16 months.

Food on big ships is always a tricky one -- how do you create top-notch cuisine on a large scale? We've always been mindful of this, so have never judged big ship food against, for example smaller, luxury lines.

But in this instance, we will -- because Norwegian Jade stood out -- and not just in the specialty restaurants.

We have to make two special mentions. The first is to Grand Pacific, the main main dining room (there is an alternative MDR, Alizar), which is like a throwback to the Golden Age of cruising, with exquisite Art Deco detail throughout. The food is similarly impressive; the NY Strip steak was the finest I have had in a main dining room.

And continuing the steak theme (a note to vegetarians and vegans -- there are many non-meat options) special mention has to go to Cagney's Steak House, where the rib eye again was up there with the best at sea.

We had a different cuisine every evening, from Japanese (Sushi Bar), to Chinese (Jasmine Garden), Brazilian (Moderno Churrascaria) to French (Le Bistro), all of it superb.

Special shout out to Norwegian for curating the most interesting shore excursion I have ever participated in, "Santorini's Musical Heritage," a combination of sightseeing/music and wine tasting, which started in the tiny village of Megalochri.

A short walk took us to Symposium, a former winery now turned into a musical heritage site. Here Argy Kakissis and Yannis Pantazis have transformed the 19th century site into a Cultural Center that combines Greek myths with music and storytelling. Yannis is both a musician and a musical instrument maker (he whipped up a rudimentary flute from a reed as we watched -- then proceeded to play it, beautifully).

But it's the immersive workshop, where he encourages participant to pick up an instrument and just bash/shake/twang or pound it, while explaining how myths and music are so entwined that is the most extraordinary aspect. He has a beautiful gift for storytelling (I was thinking how lucky his kids are) and performance, which had us entranced for an hour.

Wine is no longer made at Symposium, so another short walk took us to Gavalas Winery where we sit on a shaded patio with breathtaking views over the island and are served a selection of wines produced from the local assyrtiko grape, paired with local cheeses and breads. It's a family-owned winery, run by George Gavalas, and his son Gavalis, the fourth- and fifth-generation of winemakers. There's more wonderful story telling here as we learn for example that Santorini receives zero (that's zero) rain, and that the grapes grow from humidity formed by the sea and the air, making them extra dry to the taste.

Then it's back to Fira for selfies over the caldera with the setting sun as the backdrop, before heading down on the cable car and to the ship, full of stories of myths, music and wine.

The Death of the Towel Animal?

One forgotten casualty of COVID-19 on some lines is the towel animal. The pure joy of finding one of the little critters on your bed or hanging in your wardrobe can't be measured.

On our Norwegian cruise, there were none in the evening, which made us sad. When we asked our steward we were told, inevitably, that it was to do with COVID -- if the steward touches the towels he/she cannot leave the towel animal (though we're not sure why they could not be made with plastic gloves). Either way, the only place we were going to get one was in the gift shop -- pre-made, which rather defeated the object.

(Mind you, Norwegian has form for this -- two years ago the line threatened to remove towel animals from certain ships and reduce the number made on others. Maybe this was the push they needed to eliminate them across the fleet.)

It's the same story on Greek cruise line Celestyal, incidentally, which for me holds the gold standard for towel animal creations. Our cabin steward kindly made one when we asked, but had to dismantle it afterward to wash the towels.

Is this perhaps NCL exercising an over-abundance of caution? When we asked our fellow editors about towel animals on their cruises, we found the death of the towel animal might have been exaggerated -- they are, we are relieved to report, alive and well on Royal Caribbean and Carnival cruises.

Wi-Fi and the Norwegian App

Wi-Fi at sea is always a hit and miss affair, but in recent years cruise lines have made a huge effort to boost connectivity. Not so on Norwegian Jade, which was one of the most frustrating Wi-Fi experiences we have had for some time.

Getting online in your cabin was a near impossibility, I had to sit near guest relations every day to get any signal and even then it would drop unexpectedly, and every time at sailaway.

It's the same story with the app, which is meant to be the way forward for touchless service in theory allowing you to book, explore and plan. This is great in theory, but in practice it does not work -- unless you are attached to the ship Wi-Fi!

There are many other ship apps that operate with no need to log in to the ship Wi-Fi and function very well. It seems strange that NCL cannot manage this.

As CEO & President Harry Sommer told us, the line did not want to be the first back (hence the longer pause than most lines), but rather come back when it was 100 percent sure it could offer a safe and fun cruise experience.

Its decision to base Norwegian Getaway in Katakolon (Olympia) starting September 17, may or may not work out with the Delta variant surging across Greece. But what is certain is that NCL is taking every precaution to try to make sure that, as Sommer put it, "the ship is the safest place on earth" right now.