You may also like
Dismiss
Coronavirus: Updated Cruise Ship Policies and Cancellations Because of COVID-19 (2021)
Norwegian, Royal Caribbean Team Up To Create Cruise Health and Safety Protocols
Rolling Out the Deals: Why Now Might Be a Great Time to Book a Cruise
Wave Season Cruise Deals 2021
Live From Royal Caribbean's Odyssey of the Seas: Why You'll Never Be Bored on This Cruise Ship
Norwegian Breakaway Cruise Ship Returns To New York: We Chat With NCL President Harry Sommer
Royal Caribbean, Celebrity Drop Cruise Vaccination Requirements for Select Homeports
Live from Grandeur of the Seas: The Beloved Lady G Cruise Ship Still Reigns 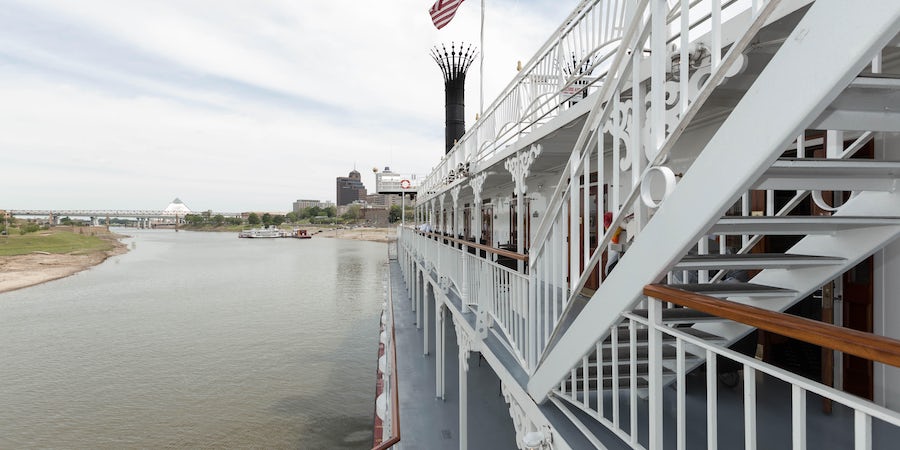 The legendary Mississippi paddlewheeler American Queen becomes American Queen Steamship Company's fourth vessel to return to service since the start of the global health pandemic. The ship is embarking passengers today in New Orleans, officially kicking off its 2021 season on the Mississippi and Ohio rivers.

While American Queen has returned its newer vessels to service -- including the new American Countess and the Pacific Northwest-based American Empress -- its 1996-built flagship American Queen has been sidelined since the global health pandemic began.

That all changed today - and the timing couldn't be better. August 8 marked the 10th anniversary of the purchase of the legendary paddlewheeler, originally constructed for the now-defunct Delta Queen Steamboat Company, on August 8, 20211.

“The purchase and restoration of the American Queen ushered in a new renaissance of U.S. River cruising ten years ago,” John Waggoner, founder and chairman of American Queen Steamboat Company, said in a statement.

“Our close-to-home cruise experience resonates more than ever, and I feel such pride seeing how far our offerings have expanded. Today the American Queen embarks from New Orleans, the American Empress welcomes guests in Clarkston, Wash.; our boutique paddlewheeler, the American Duchess, is docked under the Gateway Arch in St. Louis and our newest riverboat, the American Countess, is calling on Nottoway Resort in White Castle, LA.”

American Queen Steamboat Company currently requires proof of vaccination for all passengers onboard -- making it the only U.S.-based river cruise company to require such a mandate.

That mandate is designed to keep passengers, crew and locals in port cities visited by American Queen safe; something that is of vital importance to tourism in the local communities American Queen Steamboat Company calls on, fleet-wide.

“American Queen guests will have an immediate economic impact on the port cities she calls on from pre-cruise hotel stays to visiting attractions and patronizing small businesses along the river,” shares Shawn Bierdz, president of American Queen Steamboat Company. “To meet the needs of having the entire fleet operational, our company is up to over 500 team members once again and continuing to grow with open shipboard and shoreside positions.”

The elegant American Queen -- patterned after a classic Mississippi riverboat with all modern amenities -- will sail the Mississippi and Ohio Rivers through the remainder of the year. Itineraries are open for reservation, but booking early is recommended: American Queen Steamboat Company says it is sold out on several voyages, and only has limited availability on Thanksgiving and Holiday sailings this year.