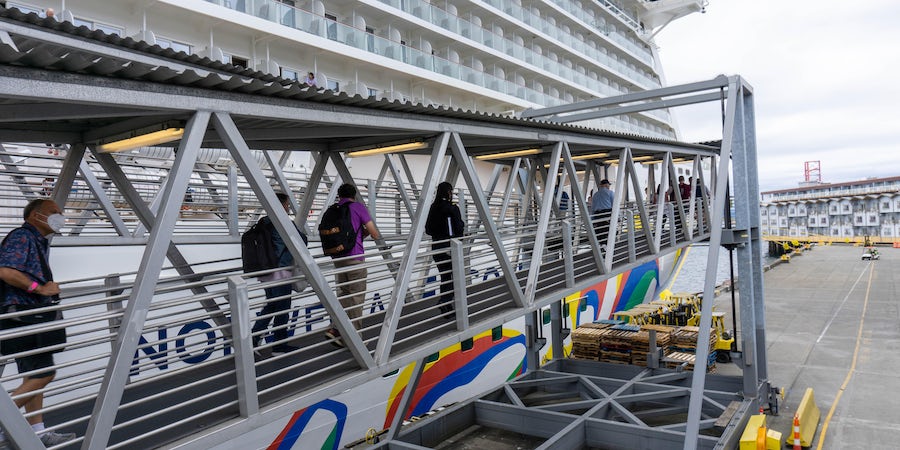 Just before six Saturday evening, Norwegian Encore slipped away from Pier 66 in Seattle and moved slowly out into Puget Sound. The 3,998-passenger ship is on a weeklong Alaska cruise sailing at around 60 percent capacity, or just over 2,000 passengers, with all guests and crew fully vaccinated.

It's the second time I've sailed to Alaska in as many weeks, but the thrill of departure has been no less impactful here aboard Norwegian Encore, which steamed out in the wake of Holland America Line's Nieuw Amsterdam, bound for Icy Strait Point, Juneau and Ketchikan (we are sadly skipping Skagway due to a non-COVID-related medevac).

To get to this point, Norwegian required every single passenger and crew to be fully vaccinated against COVID-19 -- no exceptions. Passengers also had to undergo COVID-19 antigen testing pierside -- even media who were just antigen-tested at a press conference the day before.

"It's the right thing to do. We run a global cruise company. We run 28 ships across three brands.

"Every one of those customers, crew members, people we visit in communities is as important as the rest. We believe the safest way to cruise is to have everyone vaccinated and everyone tested at the pier.

"Nothing will get in the way of that," he added.

Del Rio was speaking just days before a judge ruled the line can demand passengers show proof of vaccination before boarding in Florida.

Perhaps unsurprisingly, there are some growing pains in restarting operations.

Passengers lined up for two city blocks outside Pier 66, queuing for their COVID-19 rapid tests. I hear an IT issue within the terminal itself was the cause for the delay, which will likely be worked out prior to the ship's next departure. Still, with everyone eager to get onboard as soon as possible -- despite designated arrival times selected during online check-in -- passengers might be better off showing up in the early afternoon, once the rush has died down.

Passengers must sign up for complimentary pierside antigen testing in advance, but as a Canadian I was unable to do this, as the system designed by Eurofins only accepts US addresses. For international travellers looking to get around this: just enter the address for Pier 66.

The pre-embarkation antigen testing process was smooth and simple, and after a 15-minute wait, I was cleared to board. It's a small price to pay to know everyone onboard is negative for COVID-19 at the time of embarkation.

On the flipside, Norwegian has simplified its muster process substantially. Simply watch a video on your smartphone or stateroom TV and visit your designated muster station prior to 3:45 p.m. to be checked-in.

A series of mustering announcements are made over the ship's public address system, and services are suspended while these take place.  Then, you're free to enjoy your cruise. That's it.

On a big ship like Norwegian Encore, this new muster process makes a world of difference to the old system that crowded public rooms, outdoor decks and stairwells.

After being tested and confirmed vaccinated, masks are not required onboard -- at least for now. Cruise lines have been changing their policies seemingly by the hour, but Norwegian has once again remained concrete in its assertion masks are unnecessary onboard, though this does not include the line's European sailings which are obligated by law to have passengers wear face masks when indoors and not seated or eating or drinking.

Some passengers (including myself) have made the choice to continue to wear masks in certain situations. I mainly don mine if I am stepping into an elevator or some other place where physical distancing cannot be maintained.

Otherwise, I have been able to be mask-free for the first time in 17 months (masks are still widely worn in my hometown). It feels both odd and freeing at the same time; like a throwback to how cruising used to be in "The Before Times."

Crew are still required to mask up, but their genuine smiles come through regardless of their face coverings. In fact, during my first 12 hours onboard, I've noticed the crew are particularly happy to be back, addressing passengers graciously and with great enthusiasm.

Most importantly -- it feels safe. Where else in the world can you go and know that everyone around you is fully vaccinated and has been tested for COVID-19, too?

A Sailaway to Remember

There is a celebratory mood here onboard Norwegian Encore as we sail the Pacific Ocean bound for Alaska, with passengers, crew and Norwegian executives all genuinely thrilled to be back at sea.

An announcement was made over the public address shortly after sailaway: complimentary wine would be served in all dining venues over dinner to celebrate. Not that passengers needed help to imbibe; the ship's numerous bars and lounges have been full of revelers looking to celebrate what is, for many of them, their first foray out to sea in a year and a half.

Meanwhile, mother nature put on one of the best sunsets I've seen in the Pacific Northwest as Norwegian Encore headed out of Puget Sound. Passengers headed out to the open decks to take in the sight, to snap selfies, to hold loved ones close.

For Norwegian Cruise Line president and CEO Harry Sommer -- who is travelling onboard this week with his family -- this moment is the culmination of a hard-fought battle to restart operations and to prove that the protocols Norwegian's Sail Safe panel have put in place far exceed those of any other form of travel.

"On some level, I feel like the time period between March [of 2020] and two weeks ago was just a bad nightmare," Sommer said during a press conference onboard Norwegian Encore. "And it was, for so many people."

"To come back and see so many people enjoying their vacation, it feels like we're in a dream."

Asked about why Norwegian didn't go the route other cruise lines have adopted -- to allow up to five percent unvaccinated passengers onboard as allowed under the U.S. Centers for Disease Control and Prevention's Conditional Sail Order, Sommer presented the same stoic unwaveringness as Norwegian Cruise Line Holdings' head Frank Del Rio.

"Five percent: it doesn't sound like a big number," Sommer said. "So, what's the big difference between 95 percent [vaccinated] and 100 percent? It's a big difference.

Cruise Critic's coverage onboard Norwegian Encore continues all week as we sail to Icy Strait Point, Juneau and Ketchikan.