You may also like
Dismiss
Coronavirus: Updated Cruise Ship Policies and Cancellations Because of COVID-19 (2021)
Norwegian, Royal Caribbean Team Up To Create Cruise Health and Safety Protocols
Live From Royal Caribbean's Odyssey of the Seas: Why You'll Never Be Bored on This Cruise Ship
Norwegian Breakaway Cruise Ship Returns To New York: We Chat With NCL President Harry Sommer
"Cruising With…" Set to Return Next Year -- But Without Jane McDonald
Royal Caribbean Poised to Restart Cruise Operations at Labadee
NCL Reveals More Dining, Design Details on New Cruise Ships Norwegian Prima and Norwegian Viva
A 'Thor: Love and Thunder' Cameo That Gets Cruise Fans Excited
Live from Grandeur of the Seas: The Beloved Lady G Cruise Ship Still Reigns 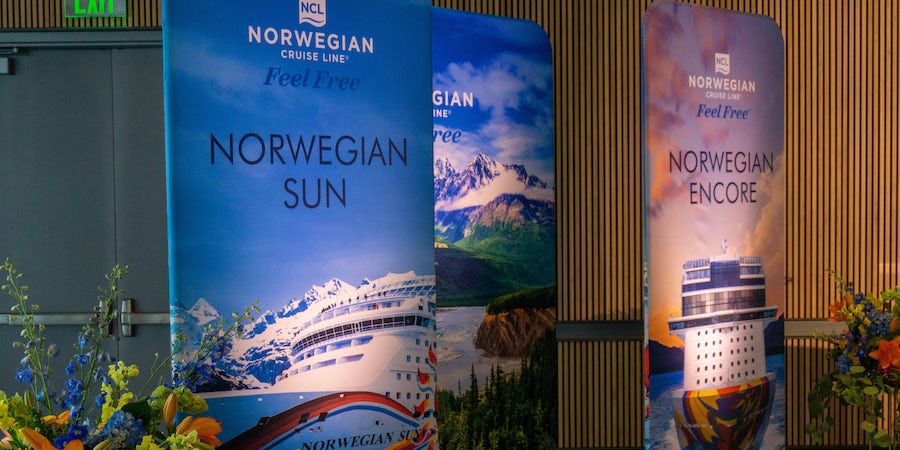 (4:04 p.m. EDT) -- Norwegian Cruise Line welcomed media to its Pier 66 terminal facility in Seattle on Friday as it prepares to relaunch its first U.S.-based cruise departures since March of 2020 tomorrow.

On Saturday, the 3,998-passenger Norwegian Encore will sail from Seattle's Pier 66 bound for Alaska, marking the first Norwegian Cruise Line ship to re-enter service in North America, and only the second vessel in the company's fleet to restart following the launch of Norwegian Jade in Greece in late July.

Norwegian Cruise Line Holdings president and CEO Frank Del Rio has been steadfast in his requirement that all passengers embarking on one of the company's vessels are fully vaccinated against COVID-19 and tested pierside prior to embarkation. The company, which counts Norwegian Cruise Line, Oceania and Regent Seven Seas among its brands, is currently locked in a battle with the State of Florida over its mandate to ensure all passengers are vaccinated onboard.

Here in Seattle, there is no such battle. Media gladly produced proof of full vaccination before being allowed into the morning press event at Pier 66, and underwent full antigen testing. With the exception of the panel of speakers, which included Norwegian Cruise Line president and CEO Harry Sommer and Safe Sail Panel member and former U.S. Commissioner of Food and Drugs Dr. Scott Gottlieb, media members were also required to mask up.

Despite the precautions, Del Rio was clearly enthusiastic about the weekend restart of its U.S. cruise operations.

"This is the best I've felt since March 9, 2020," Del Rio said, referencing the days before the cruise industry was shut down due to the worsening coronavirus situation around the globe.

"Having Dr. Scott Gottlieb here is just symbolic of how seriously we take health," Del Rio told media. "It's not a tagline, it's not a slogan for us. As early as mid-March, we committed that we would not start cruise operations unless everyone onboard our vessels was 100 percent vaccinated.

"That was at the advice of our Sail Safe panel. As you've seen in the last few weeks with the rise of the Delta variant, more companies and governments are following our lead."

As cruise lines begin to change and modify policies related to the spread of the Delta variant, Del Rio remains confident in Norwegian's policies. Tomorrow's sailing of Norwegian Encore will require all passengers to present proof of full vaccination and to pass a pierside Antigen test prior to embarkation -- even for media who were present and tested at today's event.

"This is the right thing to do," Del Rio said of testing and vaccination requirements that have been in place for months. "This little feud we have with the state of Florida shows we take it seriously. Nothing is going to get in the way of protecting our crews and guests, not even politics."

Norwegian Cruise Line has filed an injunction against the state of Florida over its stance on vaccinations, which would currently prohibit the line from asking passengers embarking or disembarking at Floridian ports for proof of full vaccination against COVID-19.

Port of Seattle: "A Great Day to be Opening Back Up"

Also present at the media event were representatives from the Port of Seattle. Norwegian Cruise Line pioneered voyages from Seattle, operating the first cruise to Alaska from Seattle back in 1999 aboard Norwegian Dynasty, then switching to Norwegian Sky the following year.

Since then, other cruise lines have followed Norwegian's move away from Vancouver, Canada -- long the traditional homeport for Alaskan cruising -- to base more of their ships in Seattle for the Alaska season.

"Even when you reflect back, Norwegian was there at the very beginning, 22 years ago," Stephen Metruck, executive director with the Port of Seattle, told the crowd. "I couldn't think of a better partner than Norwegian Cruise Line.

The cruise industry directly employs some 5,500 people in the Seattle area.

"I talked to Frank a couple times this year," Metruck said. "His commitment really has laid the groundwork for us."

Norwegian Cruise Line boss Harry Sommer -- who revealed he, along with his family and other members of the Sail Safe panel would be sailing to Alaska for the week aboard Norwegian Encore -- went to pains to note the return of Norwegian Encore to revenue sailing wasn't just about health and safety protocols.

"I'd be remiss if we only focus on the safety aspect," Sommer said. "We are also committed to delivering an extraordinary experience to our guests. We went and refurbished most of our ships…every single inch of the ship is fantastically well maintained. We've taken the time to upgrade menus, to increase our staffing onboard."

"Tomorrow is the revenue cruise of Norwegian Encore but today we concluded our practice cruise," Del Rio quipped. "No one mandated this, but we did it on our own because we wanted to make sure everything was ready to go."

As a ship with a full vaccination mandate, Norwegian Encore was not required by the U.S. Centers for Disease Control and Prevention to engage in a simulated test voyage as other lines have been.

Del Rio revealed Norwegian Encore will sail around 60 percent of total capacity when it departs Pier 66 tomorrow. After 30 days, Norwegian's goal will be to open the ship up to 80 percent capacity. After 60 days -- on Day 61 -- capacity constraints will be removed.

He also spoke passionately and with reverence about the line's crews, who have been tasked with restarting ships at a moment's notice. Del Rio said a poll taken within the company showed 97 percent of all staff were eager to come back to work, with over 95 percent completely willing to be vaccinated in order to do so.

As a result, Norwegian has avoided the skilled labor shortages that have affected other segments of the tourism industry.

He also stated even Norwegian's corporate employees are vaccinated.

Tomorrow afternoon, Norwegian Encore makes its maiden sailing to Alaska. It's going to be an important moment for Norwegian. Not only will it be the first time Norwegian Encore has sailed the West Coast, the first time it has operated a revenue voyage in 17 months, and the first Norwegian ship to restart in North America, but it will also mark the debut of new cruise facilities in Icy Strait Point and Ketchikan.

For Dr. Scott Gottlieb, the problems facing cruise presented the opportunity to lead the travel industry in health and safety practices.

"Cruises represented a unique challenge, but it also presented some unique opportunities," said Dr. Scott Gottlieb. "You can exert a lot of control over it: who gets into that environment, how they get into that environment. Nothing is 100 percent; infectious disease will get through any barrier.

"But through layers of protection -- testing everyone, making sure everyone is vaccinated, making sure the environment has been enhanced with the highest quality air filtration techniques -- if you do have someone who becomes ill, you have the capability to get them medical care very quickly."

Del Rio said to date the company has had one positive case -- a passenger embarking Norwegian Jade who tested positive at check-in. The passenger was denied boarding and completed quarantine on shore.

"We run a global cruise company," Del Rio explained. "We run 28 ships across three brands. Every one of those customers, crew members, people we visit in communities is as important as the rest. We believe the safest way to cruise is to have everyone vaccinated and everyone tested at the pier.

"As I said this morning in our earnings call, nothing will get in the way of that."

Cruise Critic will be sailing aboard Norwegian Encore from Seattle tomorrow, and will have all the coverage of this exciting sailing here throughout the week.