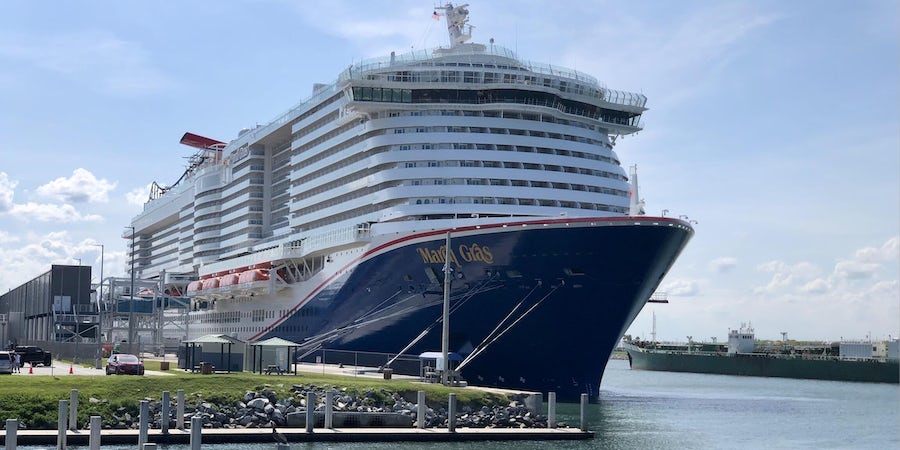 (6:20 p.m. EDT) – With cheers from the decks and along the waterfront, the most anticipated cruise ship of the year – Mardi Gras, from Carnival Cruise Line – set sail from Port Canaveral Saturday, marking the first revenue sailing from the port in 16 months.

The approximately 4,000 passengers onboard – the ship is sailing at 70 percent – waved from their balconies, and took selfies with their phones as the ship left the dock. Many had Mardi Gras inaugural T-shirts made for the occasion.

The enthusiasm on shore came from people in the area who were happy to have Port Canaveral's Terminal 3, finished during the pandemic, up and going. From hotel workers to restaurant staff to Uber drivers, people said often how happy they were to have ships back in the port, about an hour from Orlando.

For the first day, operations at the port were fairly smooth, as workers went through new protocols.

Carnival made the decision to sail its ships with 95 percent of the passengers vaccinated, and vaccine cards were checked and logged at the port on arrival. All onboard had also received an email two weeks before asking to verify vaccination status – or risk having your reservation canceled.

But for the vast majority of vaccinated adults onboard, the ship provided an atmosphere that seemed much as cruising did before the pandemic. Masks were shed after getting on the ship, and there were no seating limitations at bars and other venues. The buffet is self-serve.

Capable of carrying nearly 6,500 passengers at full capacity, the ship is the largest for Carnival and also represents a bit of a departure, style-wise.

With the first roller coaster at sea, five waterslides and a ropes course, Mardi Gras is undoubtedly a "Fun Ship" aimed at pleasing families and thrill-seeking adults. Many of the new eateries onboard – there are 22 restaurants in all – are casual in nature, and hit taste trends on land, with international street food, Mexican/Chinese and chicken sandwich options.

But there is a also a grown-up factor to Mardi Gras as well. The ship has a "neighborhood" concept that makes its size easier to negotiate, and the French Quarter bars in particular cater to a more adult sensibility. Rudi's Seagrill, developed by Rudi Sodamin who is the Master Chef at sister line Holland America, joins the Steakhouse in offering more a date-night atmosphere.

Mardi Gras is also the first Carnival ship to lean into amenities for its suite class guests. The top end Excel suites come with complimentary access to Loft 19, a sundeck retreat with its own large infinity hot tub. Cabanas are available to rent up here, and they are not cheap – prices start at $500 a day, for five people.

Cabin categories that proved successful on Carnival's Vista class ships – the colorful Havana suites, as well as the Family Harbor area – are on Mardi Gras too. For those who don't want to pony up for a Loft 19 cabin, the beloved Serenity deck is a peaceful option, and there's even more outdoor relaxation options at a new space, the Patio at Summer Landing.

Behind the scenes, Mardi Gras is the first ship in North America to operate on Liquified Natural Gas (LNG), which burns cleaner fuel.

With the ship gaining so much space, fans of Carnival's traditional venues will also be pleased on how their favorites have been expanded.

The RedFrog Rum bar near the main Lido deck pool has now been super-sized into a two-story tiki bar. What's nice about the layout is that you can either be in the heart of the action below, or watch from the second-story.

Guy's Burgers has also been greatly expanded, and moved slightly off the main pool area (but closer to the kids clubs). The set-up seems better for crowd control, and there's also much more seating.

Continuing on the Flavortown track, Guy's Pig & Anchor Smokehouse and Brewhouse is also super-sized, and anchors the new Patio at Summer Ladning neighborhood. The Heroes Tribute Lounge, a homage to veterans, also has new prominence here, as well as a cool ice cream truck.

A preview day for media and travel advisors on July 30 drew oohs and aahs, as well as screams for those who decided to try the Bolt roller coaster. Speed demons will enjoy the shot of adrenaline that the attraction provides; 40 mph might not seem fast on paper, but it is when you're revving up a a motorcycle-style car high above the ocean.

The excitement was palpable from Carnival employees and crew as well. While the ship is not the first one back – Carnival returned to service on July 3 with Carnival Vista from Galveston, followed the next day by Carnival Horizon out of Miami – it's the first mainstream cruise line newbuild that is the first in its class.

(Royal Caribbean's Odyssey of the Seas, which also set sail on its inaugural voyage today from Fort Lauderdale, is the first of its class to hit North America. But as a Quantum Ultra-class ship, Odyssey has many similarities to sister ship Spectrum of the Seas).

Feelings of relief and enthusiasm were also on display at the terminal. Mardi Gras marks the first revenue sailing from Port Canaveral since the pandemic shut things down, although Allure of the Seas completed its test cruise earlier this week; paying passengers board that ship on August 8. Other ships set to sail from Port Canaveral soon include Carnival Magic on August 7, Disney Dream on August 9, and Mariner of the Seas on August 23.

On its first week-long sailing, Mardi Gras will visit San Juan in Puerto Rico, Amber Cove in the Dominican Republic and Nassau in The Bahamas. Cruise Critic will be onboard all week and report live from the ship.