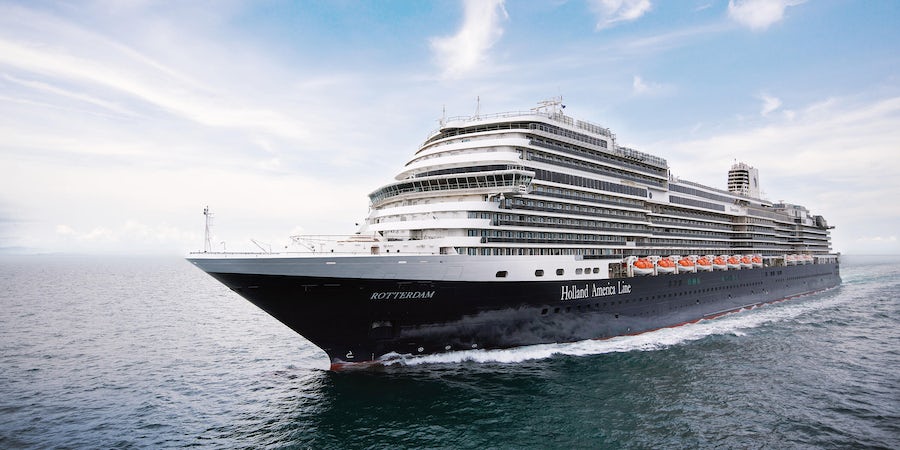 The 2,668-passenger Rotterdam was officially delivered to Holland America Line from Italian shipbuilder Fincantieri on July 30 after construction was delayed owing to the global health pandemic. The line's third Pinnacle Class ship, Rotterdam was originally to have been named Ryndam before being re-named Rotterdam following the sale of the previous ship of the same name to Fred. Olsen Cruise Lines last summer.

“Rotterdam looks stunning and will certainly live up to bearing such an iconic name as the new flagship of our fleet, carrying on a tradition of excellence that our guests have loved for nearly 150 years,” said Antorcha. “Thank you to our partners at Fincantieri and our own team members who worked tirelessly to deliver the ship on schedule during what has been the most challenging of times, and also deliver a ship that looks beautiful, is immaculately finished and will be an incredible addition to our brand. We cannot wait to welcome guests on board later this fall.”

Rotterdam will remain in inactive service until its transatlantic crossing from Amsterdam to Fort Lauderdale, Florida, on October 20, 2021. The official christening ceremony for the ship has not yet been set, with Holland America promising more details are forthcoming.

As Holland America's newest flagship, Rotterdam is actually the seventh vessel in the line's almost-150-year history to bear the name. Rotterdam VI now sails as Borealis for Fred. Olsen, while the famous Rotterdam V is now moored in Rotterdam, Netherlands as a floating hotel and conference center.

The newest Rotterdam will include numerous popular Holland America Line onboard features, such as the dueling piano bar Billboard Onboard; B.B. King's Blues Club; and the tasty Grand Dutch Café, serving up Dutch coffee and treats along with European beers.

Following its transatlantic crossing, Rotterdam sets out on a winter program of cruises to the Caribbean sailing roundtrip from Fort Lauderdale.