You may also like
Dismiss
Photos From Paul Gauguin: Cruising Has Resumed In Tahiti
Live From Royal Caribbean's Odyssey of the Seas: Why You'll Never Be Bored on This Cruise Ship
The Biggest Cruise Ship in the World, Wonder of the Seas, Has Arrived in Florida
Royal Caribbean, Celebrity Drop Cruise Vaccination Requirements for Select Homeports 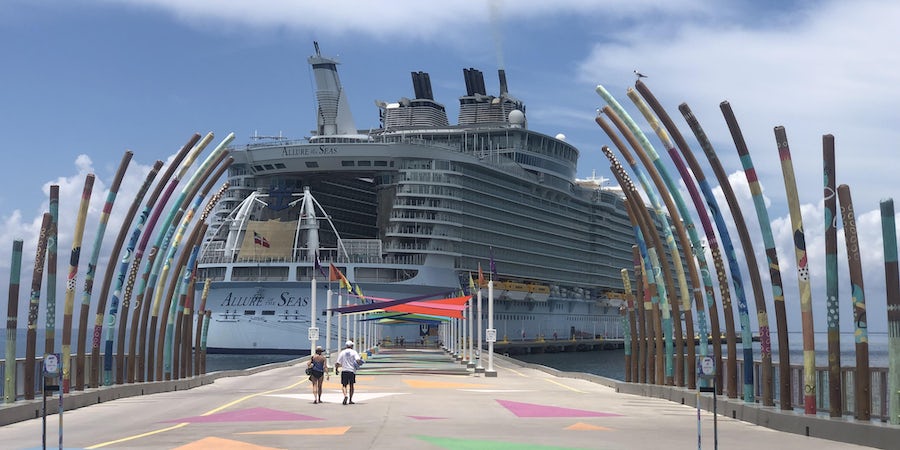 Live From the Allure of the Seas Test Cruise: No Drama, But Cheap Drinks, Free Waterslides

(5 p.m. EDT) – No one grabbed me for an impromptu nose swab. Nor did I witness any staged encounters between crew and "unvaccinated" guests.

It also turns out the mysterious agents from the U.S. Centers for Disease Control and Prevention didn't even show up for this simulated sailing, the fourth that Royal Caribbean has done in the last six weeks.

My Allure of the Seas test cruise, which is sailing back to Port Canaveral tonight as it prepares for its first sailing with paying passengers on August 8, was remarkably free of drama. And that's pretty much how the cruise line intended it to be.

I was one of 667 travel agents, Royal Caribbean employees and top Pinnacle members of the line's loyalty club that joined the two-day sailing from Port Canaveral on July 27. While Royal solicited "Volunteers of the Seas" for its test cruises -- receiving more than 350,000 entries -- the line has yet to dip into that pool, preferring to reward its most "loyal to Royal" customers with the coveted test cruise slots.

(Don't worry if you haven't received an invitation yet. Royal still has several test cruises on the books in the next few weeks, on Ovation of the Seas, Independence of the Seas, Symphony of the Seas, Mariner of the Seas and Oasis of the Seas. I'm told that at least the last four of those sailings will have Volunteers of the Seas on them).

We came onboard Allure of the Seas not really knowing what to expect. A military vet sitting at the next table in the Rising Tide bar said that he was expecting something exciting to happen at any moment.

But it turned out that the passengers who would be going through the cruise as unvaccinated and running through those scenarios had been picked at random and notified before the cruise started. As the remaining vaccinated passengers -- and we all were, as proof of a COVID-19 vaccine was required to participate -- our only job was to have fun.

To make it even more fun, Royal Caribbean threw in a few extras in addition to the cruise, which was complimentary for those selected.

The bars all had half-priced drinks. The discount booze didn't change the eerily quiet feel of the ship – with only 667 guests on a ship that can hold more than 5,480 passengers, at times it felt like I was walking through an empty mall. But we did see a group of women take advantage of the live music in Dazzles to get up and boogie to the live band, masks on.

Yep, masks on. Even though all of us on the test cruise had to be vaccinated, we were required to wear masks in public areas. While it's not my favorite thing in the world, it ended up not being that big a deal, especially because some of the best venues on the ship --the Schooner Bar, the Solarium and Rising Tide -- were open only to vaccinated guests, so you could unmask inside.

Fun events, such as the Hush silent disco, are only for the vaccinated, while Name That Tune trivia, the ice show and other theater shows have multiple times, so both groups have a chance to go. (The difference being that vaccinated passengers can take their masks off in their event).

The other things you had to make sure you remembered were your rubber purple bracelet, announcing you as a vaccinated passenger, and the bright pink "tracelet" contact tracing device. I almost left my cabin without one or more of them at first, but by the second day, making sure I had everything with me became second nature.

Royal threw in a few other freebies for the test cruise passengers. Meals in the specialty restaurants were half price, as were shore excursions (although there were only a handful at Perfect Day at CocoCay). Voom internet and photo packages were half off, but not spa or retail purchases (or Starbucks, for those who can't live without a premium caffeine rush).

The biggest surprise was that the Waterpark at Perfect Day at CocoCay, which can carry a price tag of $100 or more on a regular cruise, was free. The island seemed even more deserted than when I was there with Adventure of the Seas in June. Passengers gravitated to the Wave pool, with a few hardy souls braving the Daredevil Tower, the highest waterslide in North America.

Over at the Snack Shack, I finally had a chance to try the off-the-menu "secret sandwich," a gut-buster of a meal with mozzarella sticks and marinara sauce layered on top of crispy chicken. Skip breakfast if you're going to try it.

Where Were the Inspectors?

With all that leisure time and no role to play, the only mystery left in the test cruise was the biggie: Why weren't the CDC inspectors onboard?

After all, the only reason that official simulated sailings were required was because the CDC made it a central part of the Conditional Sail Order for cruise ships that would have more than 5 percent of the passengers unvaccinated.

Royal Caribbean and other cruise lines that cater to families such as MSC and Disney decided to go the test cruise route, while other lines, such as Carnival and Norwegian, opted to limit or ban children under 12 who were unable to be vaccinated.

CDC officials were onboard the earlier test cruises, as Royal Caribbean executives described working together with them on "tabletop exercises". Cruise Critic reached out to the CDC to see why they declined to join the Allure of the Seas sailing.

"CDC does inspect cruise ships during both simulated voyages; however, the inspectors do not attend every voyage," an agency spokesperson said in an email. "Cruise ship operators submit an after-action report with lessons learned from the simulated voyage for CDC to review prior to granting COVID-19 Conditional Sailing Certificate."

A Royal Caribbean executive told us that it didn't matter if the CDC was actually onboard or not -- the line wanted to do a simulated cruise for most of the ships coming back anyway, so the crew could get familiar with new protocols. Before COVID-19, these sailing were called "shakedown cruises," and were usually a way for the ship's crew to identify potential problems and bottlenecks.

On Allure of the Seas, we've had extraordinary service -- and also seen a lot of bored crew members. With so few people, some dining venues are empty. As on other Royal Caribbean ships, the Windjammer buffet is only serving breakfast and lunch at this time, remaining closed for dinner. The shipboad photographers, in particular, seemed at loose ends. You almost had to swat them away as you walked through the Promenade.

Royal Caribbean has also hired health consulting firms to help them with the restart -- United States Behavioral Health and DNV Healthcare. Data has been important to the line as the ships have restarted. I was sent a survey about the new e-muster process where I was gently quizzed on how much information I had retained (I was happy to get a perfect score). The line is also monitoring customer satisfaction with its new protocols.

So, while the test cruise was lacking in the passenger participatory protocol-testing action that I wanted, there's a lot going on behind the scenes. If you're on a simulated sailing, the main test you'll have is whether or not you'll have a good time. Chances are the ship will pass with flying colors.