You may also like
Dismiss
Coronavirus: Updated Cruise Ship Policies and Cancellations Because of COVID-19 (2021)
Norwegian, Royal Caribbean Team Up To Create Cruise Health and Safety Protocols
Did Ed Sheeran Name His Baby After Antarctica Cruise?
Rolling Out the Deals: Why Now Might Be a Great Time to Book a Cruise
Photos From Paul Gauguin: Cruising Has Resumed In Tahiti
Popular Royal Caribbean Cruise Ship To Homeport From Barbados For First Time
Cruising the Newest Ship Afloat: Live From Celebrity Apex
Live From Celebrity Edge: A Cruise That Seems Normal Again; "I'm So Hopeful"
Live From Royal Caribbean's Odyssey of the Seas: Why You'll Never Be Bored on This Cruise Ship
Royal Caribbean's Odyssey of The Seas Cruise Ship Officially Christened 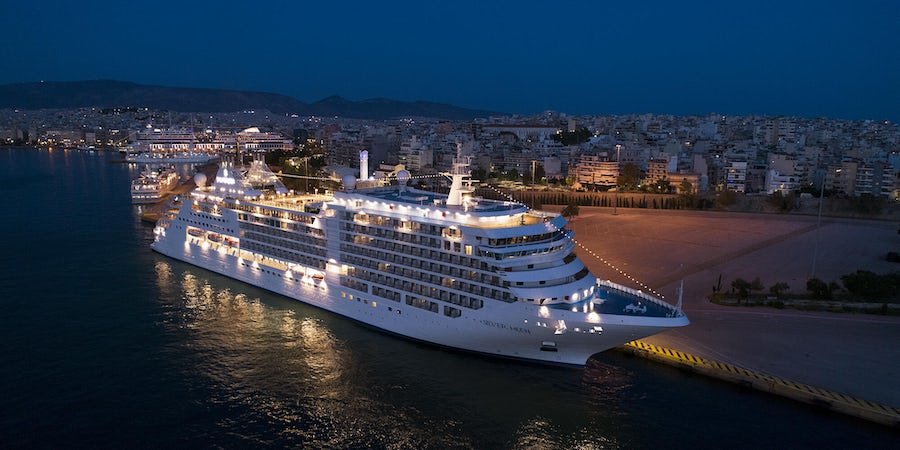 (1:35 p.m. EDT) -- Silver Moon officially became the newest ship to join the Silversea Cruises fleet Wednesday, as the ship was christened in a ceremony onboard the vessel while it was docked in Piraeus, the port for Athens.

The ship, which brings the luxury brand's fleet count to nine, began sailing earlier this month from its new European homeport; it will sail Mediterranean itineraries through November, when it heads to Asia. Cruise Critic is onboard for the naming ceremony as well as a 10-night cruise around Greece and Cyprus.

Winemaker Gaia Gaja served as the ship's godmother for the christening ceremony, fitting as Silver Moon is the first Silversea ship to be fully outfitted with the cruise line's S.A.L.T. program, an immersive new culinary concept that aims to provide travelers with a curated gastronomic experience that emphasized local dishes and ingredients both onboard and ashore. Silver Moon includes a S.A.L.T. Lab (a hands-on cooking experience), S.A.L.T. Kitchen (a restaurant) and S.A.L.T. Bar onboard, and offers S.A.L.T. experiences ashore.

Gaja is the fifth generation to own and manage the Gaja winery, located in the Italian town of Barbaresco. The family-run business has been around since 1859.

Silver Moon's naming ceremony took place in the ship's main theater, the Venetian Lounge, and passengers were allowed to view it from there at physically distanced chairs and tables, or from their TVs in-cabin. It also was livestreamed over the internet.

Fain started off the speeches, acknowledging the long pause the industry has endured during the pandemic and acknowledging the significance of the naming of a new ship, that is both a symbol of newness and rebirth.

As is often tradition with a naming ceremony, speeches and thank yous were plentiful, as was entertainment from the ship's Silver Voices, who performed several opera numbers as well as national anthems of the three countries associated with Silver Moon (the U.S., Italy and Greece; Royal Caribbean Group is headquartered in the U.S., the ship was built at Fincantieri in Italy and, of course, the ceremony took place in Piraeus).

Martinoli was the one who welcomed Gaja to the stage for her naming duties.

"I name this ship Silver Moon. Bless her and all who sail on her," Gaja said, then triggering the launch of a Champagne bottle, which successfully smashed against the hull of the ship.

Cruise Critic is onboard the 596-passenger vessel to check out the brand-new ship and experience the S.A.L.T. program. Stay tuned for more live coverage from onboard Silver Moon.