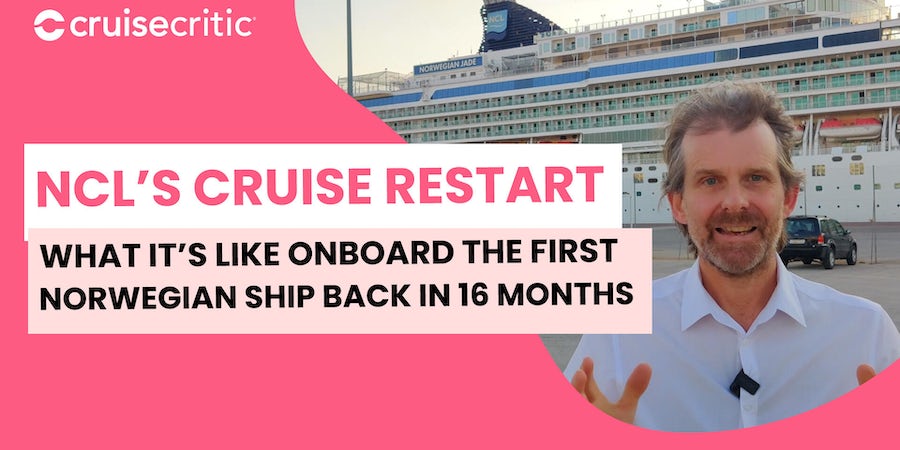 Live From Norwegian Jade: What It's Like On The First NCL Cruise Back in 16 Months

Like all the other cruise lines in the world, NCL went on an operational pause in March 2020 when the COVID-19 pandemic began. But while all the other big mainstream cruise lines have since restarted -- MSC, Celebrity, Royal, Carnival, HAL, Princess -- Norwegian is the last.

So it's a significant moment, 11 p.m. Greece time on Sunday July 25, 2021, when its first ship back, Norwegian Jade, slips her ropes, sounds her horns and heads off from the port of Piraeus. The 2,402-passenger ship is on a seven-night Greek islands cruise sailing at almost 75 percent occupancy, or around 1,800 passengers.

Here's what it's like to be on the first Norwegian Cruise Line ship back in service for 16 months.

Norwegian is mandating a 100 percent vaccination policy, which means there are no kids under-12 onboard. It's a stance that has prompted parent company, Norwegian Cruise Line Holdings, to sue to the state of Florida so it can operate under the same guidelines when it resumes cruising there in August.

The line also requires proof of a negative PCR test and conducts a rapid antigen test just before you are given clearance to board.

In the pre-cruise documents, the line stated that its 100 percent vax policy meant masks were not required. But that did not take into account the local laws in Greece, which mandate mask wearing inside.

This is enforced -- I came in from the pool deck and was in the process of fitting mine when a member of the crew asked me to put my mask on -- and reinforced every day by the Captain over the PA. And while there was grumbling about the change in policy before the sailing, it's by and large respected. I have seen just a handful of passengers not wearing one inside.

(You also get branded ones in your cabin, so there's no excuse really).

However, late in the day as this article was published, I was asked to put on a mask at an outdoor bar onboard -- a result of updated regulations from Greece.

As with most other ships sailing today, there are social distancing signs everywhere and many bar stools, tables and chairs cordoned off with no-nonsense signage ("Please Choose Another Seat").

Rooms are deep cleaned, tables are sanitized after use and you cannot sit at them until this is done. The buffet is not self-serve. And like all other major lines, the traditional muster drill is no more; you simply watch a video of the safety briefing, then go to your muster station in your own time.

These protocols will be adjusted and could change, depending on the latest health guidelines in Greece, said Harry Sommer, NCL's CEO & President, who was in Greece for a pre-cruise for friends and family ahead of this sailing.

He singled out the served buffet, which right now works just fine when there's only 75 percent capacity, but would be impractical on a full sailing. It'ts likely to go back to being self-serve when it's safe.

Sommer addressed the health issue head on, admitting that it's highly likely that even with the strictest health protocols onboard, there is bound to be a COVID-19 case, as recent sailings in the Caribbean, Iceland and Alaska have found. Hee underscored the fact that life will continue onboard the ship as normal.

"What I can guarantee is there won't be widespread outbreaks," he said. "Everyone will be safe and that if the occasional case happens, it will likely be an asymptomatic case and life will continue onboard as normal."

One of the huge pluses of Norwegian's fully vaccinated policy is that passengers do not have to be part of a bubble when they go onshore but can wander at will.

I had struggled with being kept in the bubble on my UK cruises, and since this was my first trip out of the country in over a year, I took advantage of being able to do my own thing.

We enjoyed shopping in Iraklion, in Crete, and went running in Rhodes, to the beautiful Elli Beach.

But I have noticed that despite this, most people are opting for organized shore excursions, leaving the ship blissfully empty during the day.

Of course, allowing people to wandering freely means that there is nothing Norwegian (or any cruise line can do) to stop you from catching COVID-19 on the island and bringing it back to the ship.

And the Delta variant is a concern. We arrived in Mykonos the day after it came out of a snap lockdown in which singing, dancing and live music have been banned for a week. The variant is ripping its way through these islands as elsewhere in the world.

So far, our itinerary has been unaffected, but things happen so quickly we are full prepared for any last-minute changes. And in a reversal from what was taking place in March 2020, we could see a situation where a ship decides not to dock somewhere because COVID cases are too high on land.

But should someone get sick onboard, Norwegian has a plan. The line is covering every cost that a passenger with COVID might incur, to encourage people to come forward if they feel ill. If that happens, a part of the ship has been put aside as an isolation area, where the passenger will stay until the next port.

They will then be taken off to a local hospital, and Norwegian will cover all the bills and repatriate the sick person. The line has put in place port agreements and identified hospitals on every island, to ensure guest safety.

Norwegian's determination to make this ship "the safest place on earth", as Sommer puts it, is all about putting the passengers at ease. And it works. Everyone we have spoken to, though respectful of health protocols onboard, is determined to have a good time.

There's a real fun atmosphere onboard. For many, it is their first time out of the country since March 2020 -- and it's great to see people chatting to strangers at the outside bars, dancing on the pool deck or belting out karaoke in Bliss Lounge.

In fact, this sailing feels the most "normal" of all three that I have so far taken. It could be to do with the number of people onboard (it feels almost full); or perhaps it's the passenger mix -- Jade is sailing with mostly Americans who are a lot more exuberant than Brits (my previous two sailings were round-England cruises for UK passengers only). Or it could be because we are a lot further down this COVID path than even two months ago.

Whatever the reasons, it feels great to be back onboard, celebrating Norwegian's -- and indeed the whole industry's -- "Great Cruise Comeback", or again in Sommer's words: "Cruising is back, cruising is great, cruising is safe and cruising is fun."