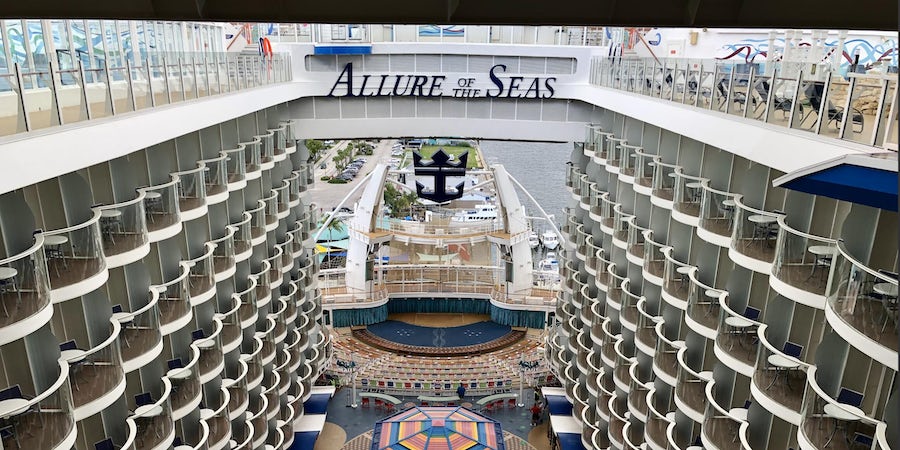 Live From A Royal Caribbean Test Cruise: Onboard With The CDC

(5:23 p.m. EDT) – The passengers lined up to board Allure of the Seas looked just like anyone else heading out for a two-night cruise to the Bahamas – happy and excited, dressed in Caribbean shirts and flip flops.

But somewhere among the 667 passengers boarding in Port Canaveral were inspectors from the U.S. Centers for Disease Control and Prevention, joining the cruise for reasons other than to soak in the sun at Perfect Day at CocoCay.

Allure of the Seas is currently undergoing its "simulated voyage," and we passengers are actually volunteers, onboard to help the line put the ship through its paces under the CDC's watchful eye. It's the first of a series of test cruises in the next few weeks that the line is opening up to its most loyal passengers, as well as travel agents, as it seeks to fulfull the requirements of the CDC's Conditional Sail Order.

The ship -- the first Oasis Class vessel to return to operations -- is scheduled to set out on its first revenue cruise on August 8, provided all goes well this week.

The passengers behind me in the more-chaotic-than-I-would-have-expected check-in line at Port Canaveral were Pinnacle members, at the top of the Royal Caribbean loyalty heap. When our Allure sailing is done on Thursday, they plan to fly to Seattle to board Ovation of the Seas, for its test cruise.

The couple, from Venice, Fla., would likely be the object of envy from the Volunteers of the Seas Facebook page, where more than 70,000 participants are breathlessly waiting for a test cruise invitation. When Royal Caribbean first announced that they were eventually take volunteers, back in late 2020, more than 350,000 people raised their hand to participate.

It's not too late to receive an invite, as more test cruises are coming as ships re-enter service from U.S homeports. Upcoming simulated sailings beyond the two ships this week include Independence of the Seas in Galveston, Symphony of the Seas in Miami, Mariner of the Seas in Port Canaveral, and Oasis of the Seas in Bayonne/Port Liberty in New Jersey (see our full list).

What Are Test Cruises?

Test cruises, known more formally as "simulated sailings", are a phenomenon of the pandemic-era return to service.

Mandated by the CDC for ships that intend to carry fewer than 95 percent vaccinated passengers, the test cruises give the crew a chance to work through the new health and safety protocols that the line (and the CDC) has implemented. And it also gives the CDC peace of mind that the cruise lines are following the rules outlined in the agency's Conditional Sailing Order.

Allure of the Seas is departing from Florida, and so technically after last week's court order, the CDC rules are more of a guideline than a requirement in the state. But because the legal wrangling between the State of Florida and the CDC is likely to drag on, Royal Caribbean has said that it will continue to follow the agency's protocols.

So far, Royal Caribbean has completed several test cruises for its ships sailing out of U.S. ports carrying families that might have unvaccinated members. The first was Freedom of the Seas, before its July 2 restart out of Miami. It was followed by Serenade of the Seas, sailing from Seattle to Alaska, and Odyssey of the Seas, which makes its debut this Saturday out of Port Everglades.

Those first test cruises were manned by Royal Caribbean employees serving as volunteers, for the most part. The line's Senior Vice President of Hotel Operations Mark Tamis said that some volunteers had been assigned specific roles, so the CDC could see how the line would handle various scenarios. For example, one person could play a mother and daughter, where one of them had COVID-19 symptoms.

It's that kind of tabletop exercise that I hope to participate in. After all, these are working cruises, right?

Embarkation, Onboard Procedures Similar to Other Ships

My first few hours onboard Allure of the Seas are not that much different than the cruises with paying passengers that I've already taken this summer on Adventure of the Seas and Celebrity Edge.

Once our check in line started moving, people who hadn't put on their masks were told to do so before they entered the terminal. There, our first stop was a podium, where a port worker asked to see our vaccination card.

When I received my COVID-19 vaccine back in March, I had hoped to keep it locked up and safe at home. But all of the cruises that I've taken so far require you to bring the original card to check in, where it's scanned. The worker asked me to state that was the original, and not a forgery.

Once my vaccine status was noted, the worker gave me a purple rubber wristband. I would use this to show that I could enter areas of the ship that are open only to vaccinated passengers.

These include mostly adults-only areas, such as the Casino and the Solarium. Some bars, such as the Schooner Bar, Rising Tide and the Blaze nightclub, are also off limits to the unvaccinated. Places like the fitness center have certain hours when unvaccinated passengers can come in, while vaccinated passengers can come at any time (The daily Cruise Compass lists what venues, events, showtimes and dining rooms are open to whom).

The CDC does not allow people under 18 to be test cruise volunteers, and in our invitation, Royal Caribbean specified that all volunteers had to be vaccinated. Still, the ship is following the rules as they will be on the revenue sailings. And so that means we will be wearing masks in all indoor public areas throughout the ship unless it's an area just for vaccinated passengers.

For me, after cruising on Adventure of the Seas and Celebrity Edge where masks were not required anywhere because everyone was vaccinated, the rule seems like going backward. But seeing as my boarding coincided with the CDC issuing guidance that even vaccinated people should mask up in areas where the Delta variant is spreading, masking seems like a good idea, if a bit annoying in the Florida humidity.

Most people onboard seemed to take the masking rule in stride. The crew is empowered to enforce the protocol, and I saw this happen outside the Windjammer buffet. As an older man approached the buffet entrance, his face uncovered, the hostess gently asked him to put it on.

The man grimaced. "If I have to," he groused. His wife gave him a look, and just like that, the mask went on.

Tracelets, Cartoons, But No COVID Test

There were a few "new to me" protocols that I hadn't been expecting.

First, as part of check in, we were given a pink wristband known as a "Tracelet," meant to be used for contact tracing. The friendly port worker told me that it was water resistant, but not waterproof, and I should keep it on at all times when not in my stateroom.

With both the purple rubber wristband and the Tracelet, my wrist seemed loaded up. I did have crew ask to see my purple wristband as I walked into certain venues around the ship, so it's something that is being checked.

I also laughed out loud when, once in my room, the TV played a jazzy animated cartoon aimed at encouraging social distancing. In the cartoon, masked passengers sat several seats apart in the theater and perched on the pool several feet from each other. "It's a new way of togetherness," the jingle went. It may be burned into my brain forever.

Finally, I had been expecting to take a COVID-19 rapid antigen test before boarding, as this had been mentioned in the CDC test cruise guidelines. "Not if you're vaccinated, hon," the port worker told me.

It's a similar situation that I encountered when I boarded Celebrity Edge in Port Everglades, so I shouldn't have been surprised with the lack of testing. I just thought that with the CDC onboard, the process would have been more rigorous.

But then, these test cruises are meant to be as close to a "real" cruise as possible. In the Before Times, these short sailings were common for new ships, and were called "shakedown" cruises. There isn't that much of a difference between the two.

As for the inspectors themselves, I have yet to spot them. With so few people on such a large ship – Allure of the Seas can take more than 5,800 passengers – it's feasible that I might not see them the entire time. I'll be looking.