You may also like
Dismiss
Coronavirus: Updated Cruise Ship Policies and Cancellations Because of COVID-19 (2021)
In Industry Step Forward, CDC Seeks Public Comment On Cruise Resumption
What Happens to Cruise Ships During the Pandemic's Hurricane Season?
Rolling Out the Deals: Why Now Might Be a Great Time to Book a Cruise
Wave Season Cruise Deals 2021
CDC to Make Masks Mandatory in Cruise Terminals, Cruise Ships in the U.S.
Allure of the Seas Cruise Ship to Make Oasis-Class Debut in Galveston
Emerald Cruises Officially Launches in Australia
Royal Caribbean Takes Delivery of World's Biggest Cruise Ship Wonder of the Seas
Just Back From Allure of The Seas' Maiden Galveston Sailing: Hits and Misses 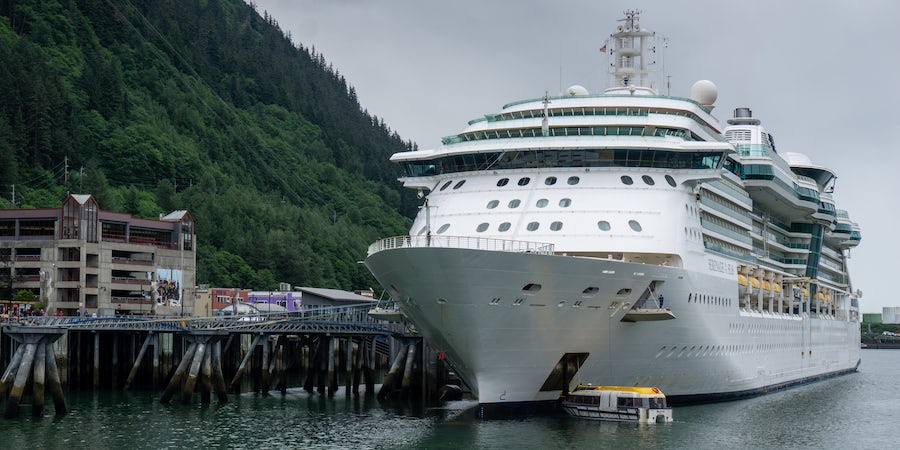 Royal Caribbean Cruise News: Just Back from Serenade of the Seas, and Alaska's Restart

(4:13 p.m. EDT) -- A week is all it took to offer a glimmer of hope and a glimpse of a brighter future for cruising in Alaska.

Royal Caribbean's Serenade of the Seas set sail from Seattle on July 19, becoming the first large cruise ship to call on an Alaskan port in 21 months when it docked in Sitka two days later.

Big-ship cruising returns to Alaska with a bang for the first time since fall 2019 after being absent for a year and a half following the loss of the 2020 cruise season because of the COVID-19 pandemic.

Cruise Critic was onboard Serenade of the Seas for its first sailing, marking the beginning of the Alaska cruise season. After a week of cruise adventures, things felt almost normal once again, even if it is a slightly new normal.

Return to the Last Frontier

Serenade of the Seas is not the first cruise ship to restart operations, nor will it be the last. It is, however, significant for the industry, passengers, crew and for Alaskans.

Many Alaskans have depended on a short but lucrative tourist season to sustain them through the lean winter months. Even after other world events, like 9/11 or the 2008 economic crisis, cruise ships kept returning to Alaska.

No one I spoke with during my week in Alaska could remember a year in which no ships came. And accordingly, no one had planned for such a dramatic shutdown of cruise and travel to Southeast Alaska.

"This set us back years," Dave Allen, president and co-owner of Sitka-based Allen Marine, told Cruise Critic. "Usually when we take on debt, it's because we're building new vessels that we can put people on and get paid for that. Now, we're just piling that debt up, and we just have to pay it back."

Allen Marine provides most of the water-based shore excursions for cruise lines in Southeast Alaska, operating sightseeing tours through Misty Fjords and Tracy Arm, not to mention whale-watching excursions in a number of ports.

"A huge amount of it was psychological," Allen said of not seeing cruise ships last year in local ports. "It was really starting to feel like it might not ever happen again."

Having Serenade of the Seas pull alongside provided optimism for locals that recovery was at hand -- and for passengers, who were able to finally visit Alaska's storied ports of call.

"Having the ship actually arrive today ... we can kind of take a breath and say, 'It's here. It's happening'," Rachel Roy, executive director with the Sitka Chamber of Commerce, told Cruise Critic shortly after Serenade of the Seas arrived.

"We're going to be able to recover a little bit faster because we were able to have a cruise season this year."

Cruisers returning to this fan-favorite destination can expect an experience similar to the prepandemic one -- many of the shops, bars, restaurants and activities we've come to know and love have survived the harsh past year.

Attractions geared primarily to tourists were open. Ketchikan's Great Alaskan Lumberjack Show put on its first performance for paying customers in over a year and a half; it was the first time in the attraction's 21-year history that it had shut down.

"Our main goal was to get back on our feet, support the cruise ships, support Ketchikan and then support ourselves," Boone Scheer, manager at the Great Alaskan Lumberjack Show, told Cruise Critic. "My whole family is up here. I've got two little ones. My wife is the retail manager inside. It's a nice little family business."

Some tours aren't running now, as operators have to weigh the cost of restarting operations for a significantly truncated 2021 season. But the majority of them are up and running: You can go gold panning, visit Mendenhall Glacier, kayak, take in the local Tlingit culture, embark on a flightseeing journey or explore independently, the latter provided you are fully vaccinated.

"It's a little bit slower than normal," Scheer said of Ketchikan's total tour operations. "But with that comes a little bit less crowds. It's a really good time to see Ketchikan in its local state."

Of course, ships won't be this empty forever -- Serenade was sailing with roughly 632 passengers, about 30 percent of full capacity -- nor will towns be this deserted. Most operators I spoke with were treating 2021 like the practice run for 2022; a chance to get back into the swing of things. But for now, this special set of circumstances -- fewer ships with dramatically reduced passenger capacities -- is creating a once-in-a-lifetime opportunity to experience Alaska the way the locals do.

A stroll along Ketchikan's famed Creek Street is all the proof you need to see how things have changed. Ordinarily a packed, shoulder-to-shoulder affair as tourists prowl what would have been the town's red-light district during the Gold Rush days, only a handful of locals and ship passengers were meandering down its planked boardwalks.

One thing to remember, regardless of what line you are sailing on to Alaska: You'll need a mask. Many businesses in Southeast Alaska are requesting patrons either wear a mask or wear one if they are unvaccinated. It depends on the business, and signs are visible in every shop window telling those about to enter what is expected of them.

You'll also need a mask on any motorcoach tour, and inside most buildings, museums and events unless otherwise directed.

Keep in mind: This guidance could (and likely will) change. Remaining flexible is the name of the game these days.

One of the most positive changes to result from the global health pandemic is a new and improved disembarkation system that has been adopted onboard Serenade of the Seas.

Rather than having passengers wait in a series of lounges (or, more commonly, cluster in stairwells and landings throughout the ship), passengers are encouraged to wait in their staterooms until their disembarkation number has been called.

There's no more rush to get out of your room by a set time, no more wandering the ship like a nomad dragging all your luggage behind you. Plus, there are no audible announcements: Tag numbers are called on the in-room television and passengers are directed to the appropriate elevator bank to disembark.

As someone who used to find disembarkation day an unbearably stressful ordeal, I found the ease in which I left Serenade of the Seas to be welcomed change that I hope sticks.

Alaska is a state shaped by pioneers. My week aboard Serenade of the Seas showed that pioneers still matter.

Those folks setting sail onboard Serenade of the Seas this season, and the other ships headed to Alaska in 2021, are pioneers of a sort, getting back out there and traveling to explore the Last Frontier by ship once again.

Over the past week, I met guests who had been to Alaska numerous times, and those who had never been before. All spoke of their determination to take this cruise, and all expressed comfort with the health and safety measures taken by Royal Caribbean.

Likewise, Alaska's ports of call have lost none of their enduring charm in the past 21 months. Old favorites are still there, and new shops, excursions and features are being added seemingly unabated.

As I disembarked Serenade of the Seas back in Seattle, news came that Royal Caribbean Group had partnered with the Alaska Travel Industry Association Foundation to distribute over $745,000 in grants to more than 65 tourism businesses and community organizations in Alaska.

"Alaskans are known for coming to the aid of their neighbors, and we understood the importance of being there for the community in a time of need," said Wendy Lindskoog, Royal Caribbean Group's associate vice president of government relations for Alaska. "Even as we start up cruising in July, a partial season cannot make up for the losses over the last 16 months. We knew we had to find the resources to help local businesses and nonprofits supporting the well-being of Alaskans."

Serenade of the Seas sails Mondays from Seattle bound for Alaska through September 20, 2021. Its larger fleetmate, Ovation of the Seas, will offer Alaska cruises from August through mid-October, with sailings departing Seattle on Fridays.