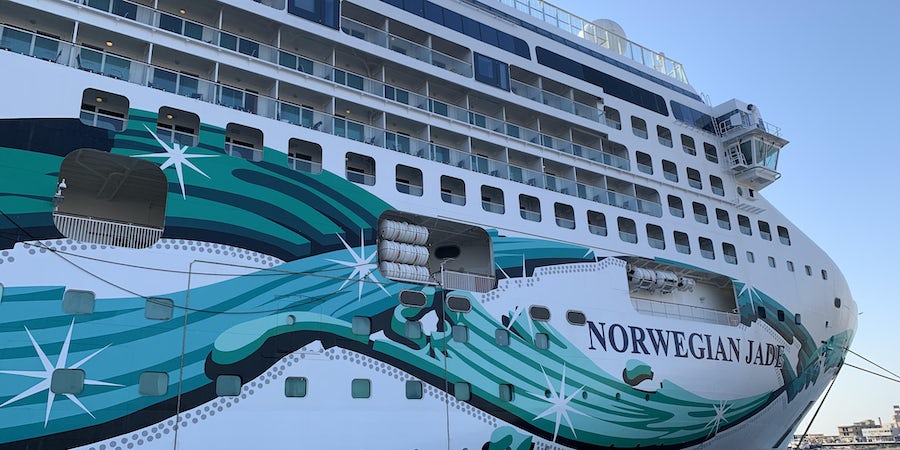 (9:45 a.m. BST) -- The travel advisory on international cruising from the FCDO could be lifted in the next few days, according to Norwegian Cruise Line's international boss.

The two key demands from the Foreign, Commonwealth and Development Office -- passenger repatriation and the successful resumption of domestic cruises -- have been fulfilled, explained Eamonn Ferrin, the line's VP International Business.

Both of these are key to the demand being lifted as part of the FCDO's regular review process -- the next one of which takes place at the end of this month.

"We expect that advice to hopefully change soon," said Ferrin, speaking onboard Norwegian Jade in, the first NCL ship to set sail in 16 months, from Athens on Sunday.

One was a joint agreement around the repatriation of passengers abroad, he explains.

"And the second part was an ongoing review of what the return to sailing has looked like in British cruises. And it's gone really, really well."

Although Brits are now free to travel to the so-called Green and Amber list of countries, and fully-vaccinated citizens do not need to quarantine (except from France) when they return, there is still a specific travel advisory against cruising internationally.

The advisory is not an outright ban, but can invalidate some insurance policies.

Why Not UK This Year?

Unlike most other cruise brands, NCL elected not to base a ship out of Southampton this year to offer round-Britain cruises. Asked why, Ferrin explained:

"There were two or three things. This was the earliest we wanted to start, so July 25th, which means the timing isn't wonderful for UK cruises -- it gives you about 6 weeks before summer's over, the kids go back to school and the weather starts getting dodgy.

"And the second thing was we felt we'd be a little bit crowded in the marketplace, which turned out to be the case.

"And thirdly it's not really our DNA, our strength is fly-cruise, and a global audience, so Greece we felt was a much better first start opportunity."

Jade will be followed by Norwegian Epic from Barcelona and Norwegian Getaway in Katakolon for Olympia (a new homeport for NCL), starting September 17, 2021.

The line's brand new ship class, Norwegian Prima, which will launch next year, will be based in Southampton in April 2023, the first Norwegian ship to be homeported in the U.K. since 2008.

It will not sail to the Med, but rather offer 11-night "open-jaw" itineraries to Iceland via the Norwegian fjords, allowing passengers to join the cruise in Reykjavik or Southampton.

Prima will share the new Horizon Terminal in Southampton with MSC Cruises and the ship will be based here until September 17, 2023.

Unlike many seasonally based ships in the U.K., Prima will be marketed internationally rather than solely at Brits, Ferrin explained.

"The UK market is really important to us, and also that itinerary is proving hugely popular, not just with British, but international customers, they absolutely love it," he said. "What we try to do is offer a product that fits a global audience and maximises the returns for the company.

"So when we look at itineraries we look at them with a global perspective, what will be attractive to Americans, Europeans etc. Whereas a lot of UK-based operators are more UK-centric and then it becomes more of a British ship."

Ferrin said one of the advantages of Prima was because of its fuel emission standards, it could visit a number of the UNESCO World Heritage fjords in Norway that are not usually open to such large ships.